For The Love of Candy 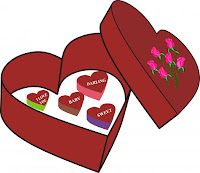 I’ve got candy on my mind this month and it has nothing to do with Valentine’s Day or the empty box of chocolates on my desk. The real reason I’m thinking of all things sweet is that I just finished a book about a heroine who owns a candy shop.
While doing the research for my book, I turned up some fun and interesting facts. For example, we can blame our sweet tooth on our cavemen ancestors and their fondness for honey.  But the most surprising thing I discovered was that marshmallows grow on trees—or at least used to.  That was before the French came up with a way to replace the sweet sap from the mallow tree with gelatin.
I also learned that during the middle ages, the price of sugar was so high that only the rich could afford a sweet treat.  In fact, candy was such a rarity that the most children could expect was an occasional sugar plum at Christmas.  (BTW: there are no plums in sugar plums.  Plum is another word for good).
This changed during the early nineteenth century with the discovery of sugar-beet juice and mechanical candy-making machines. 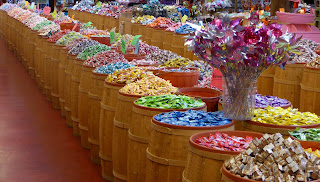 Soon jars of colorful penny candy could be found in every trading post and general store in the country. It took almost four hundred candy manufacturing companies to keep up with the demand.
This changed the market considerably. Children as young as four or five were now able to make purchases independent of their parents. (Had youngsters known that vegetables including spinach were used to color candy, they might not have wasted their money.)
Children weren’t the only ones enjoying the availability of cheap candy. Civil War soldiers favored gumdrops, jelly beans, hard candy and hub wafers (now known as Necco wafers).
Never one to miss a trend, John Arbuckle off coffee fame, noted the sugar craze that had swept the country and decided to use it as a marketing tool.  He included a peppermint stick in each pound bag of Arbuckle’s coffee to encourage sales.
“Who wants the peppermint?” was a familiar cry around chuck wagons.
This call to grind the coffee beans got a rash of volunteers.  No rough and tumble cowboy worth his salt would turn down a stick of peppermint candy, especially when out on the trail.
Arbuckle wasn’t the only one to see gold in candy. Outlaw Doc Scurlock, friend of Billy the Kid and a Bloody Lincoln County War participant, retired from crime in 1880. Though he was still a wanted man, he moved to Texas and opened up a candy store.

Cadbury, Mars and Hershey rode herd on the chocolate boom of the late 1800s, early 1900s.  Penny candy still made up eighteen percent of candy sales but, by that time, some merchants had refused to sell it.  Profits were thin and selling such small amounts to children was time-consumingChocolate was more profitable. The penny candy market vanished altogether during World War II when sugar was rationed, but did made a short comeback in the 50's.  Fortunately, no war could do away with chocolate.
Okay, now that your sweet tooth has gone into overdrive, tell us the name of your favorite candy?  Anyone have a candy memory to share?

Meet the brides of Two-Time, Texas