March 16th: This Day in History 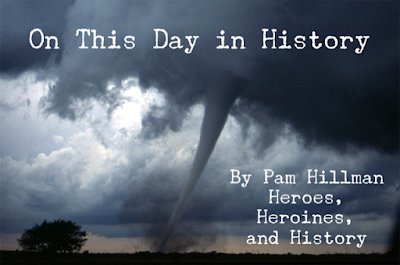 “This day in history” — any day, is always a fascinating topic, but most people like to talk about famous events, people, places, and things that happened on any give day.

When something is mentioned, we generally know the name, the place, the horrific-- or equally terrific--event. The website This Day in History has a plethora of fascinating things that happen on any given year, and any given day.

This is 2018. Just considering March 16th, we’re looking at over 4000 days that would be considered “this day in history”. And then consider the number of people who have walked the earth in those 4000 years. According to a report by the Population Reference Bureau in 2015 that number is around 108.2 billion people.

“On this day, in 1850, The Scarlet Letter, by Nathaniel Hawthorne’s story of adultery and betrayal in colonial America is published.”

108.2 billion people divided by 4000 days… okay, I don’t think my math skills (or my rinky-dink calculator) will let me calculate that number… but regardless, that’s a lot of births, deaths, marriages, babies saying “Mama” for the first time, suitors proposing.

That’s a lot of young couples who said “I do”, a lot of young men and women who went off to war, and a lot who would never return because they lost their life on this day in history.

“On this day in 1865, the mighty army of Union General William T. Sherman encounters its most significant resistance as it tears through the Carolinas on its way to join General Ulysses Grant’s army at Petersburg, Virginia ~ Battle of Averasboro, North Carolina”

That’s a lot of folks leaving their homes searching for a better life, a lot of floods, a lot of fires, a lot of heartache, and a lot of joy.

“1942: A deadly tornado outbreak occurred over the Central and Southern US on March 16-17th. The tornado outbreak killed 153 people and injured at least 1,284. The best estimate indicates this event contained 13 F3 tornadoes, 6 F4s, and one F5. The F5 tornado occurred north of Peoria, Illinois, in the towns of Alta, Chillicothe before crossing the Illinois River and striking the town of Lacon. A quarter of the homes in Lacon were destroyed, and debris was carried for 25 miles.”

Isn’t that the saddest thing ever? 153 people killed, 1,284 injured. Such tragedy, so many stories, so much heartache. So many years of sadness ahead of them.

While I find the lives of famous people who have had multiple books written about them (ie. James Madison) interesting, I find the common, every day people, places, and things just as fascinating, if not more.

The Diary of Samuel Pepys, Wednesday 16 March 1663/64: “And then I rose and up, leaving my wife in bed, and to my brother’s, where I set them on cleaning the house, and my wife coming anon to look after things, I up and down to my cozen Stradwicke’s and uncle Fenner’s about discoursing for the funeral, which I am resolved to put off till Friday next.”

Each of these small tidbits makes me want to find who was listed as number 129 in that tornado. Who were they? Who and what did they leave behind? Was one of the 1284 injured a wife, a child, a parent? Out of 108.2 billion people, I want to know about that one in this day in history.

What about you? Do you journal or have a family Bible, journal from an ancestor, or extensive genealogical research with some obscure or fascinating facts?