With the end of WW II, a group of Nebraska survivors 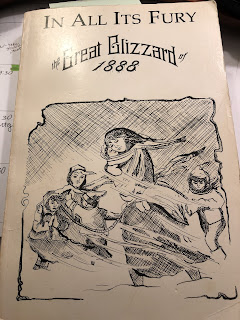 were finally able to complete a project that had been delayed by the war. All were members of "The January 12 1888 Blizzard Club," and they had stories to tell. The result of their efforts, the book at right, makes for inspirational (and sometimes terrifying) reading.

The Blizzard of January 12, 1888, was a unique event because of the unusual and subsequently deadly combination of gale winds, blinding snow, and an extremely rapid drop in temperature. The cold front that dropped out of Canada that day moved in at a rate of 45 mph.

The January day started out unseasonably warm by prairie standards, and many children went to school without coats or gloves. One survivor remembered, "At recess, we were all out playing in our shirt sleeves, without hats or mittens. Suddenly we looked up and saw something coming rolling toward us with great fury from the northwest, and making a loud noise. It looked like a long string of big bales of cotton about twenty-five feet high ... and above them it was perfectly clear." The sight terrified some of the children, and when the teacher heard screams, she came outside to investigate. One look to the northwest and she hurried the children inside. The last student had just gotten inside the building when the storm struck. "It hit the building with such force that it nearly moved it off its cobble-stone foundation." 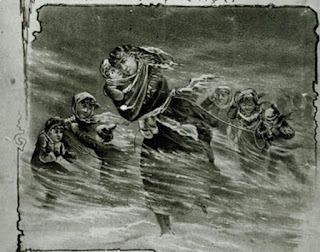 The blizzard is often called "the children's blizzard," because it struck during school hours and trapped hundreds of children with their teachers--many of them barely adults themselves--all across Dakota Territory and Nebraska.  Minnie Freeman led her 16 pupils to safety and was lauded as a heroine. Today, a mural at the Capitol Building in Lincoln, Nebraska, honors her. See it here:
http://curriculum.nebraskavirtualcapitol.org/foyer-building-nebraska-and-civil-responsibility/prairie-disasters/

Another 17-year-old teacher managed to get her students to safety but then got lost herself trying to reach home. She took shelter huddled among the animals in a shed, "but her poor feet could not be saved." In spite of her tragic experience, "Miss Kent lived a normal and helpful life."

"My brother was only three feet from me ... but the snow was so thick I could not see him."

" ... we came in looking like snowballs. The snow had blown right through our clothes."

"If we opened the door and put our hands out we could not see our hands. It was like shoving a hand and arm into a solid snow wall."

"The teacher brought in fuel by tying a cord to the door knob and fastening the other end on himself."

"The force of the storm grew greater as night settled down and it seemed at times as though a giant hand was lifting the building from its foundation. The  roof seemed likely to be torn off."

"The passenger train froze on the track and was drifted over. They did not get out for two days. Some of the town people made coffee and took food to passengers ... Mother Blakewell, as we called her, ran the hotel and J.S. Wilkins a boarding house and they furnished coffee and food free, as did many others."

In the aftermath of the blizzard:

"The morning of the 13th was clear and cold. I have never in my life seen such sundogs ... there were drifts twenty to thirty feet high and as hard as stone."

"Eight large steers were found standing in a clump of weeds and willows, suffocated and frozen."

"The creek channel was eighteen to twenty feet deep and fifty feet across. It was so packed with snow, hard as concrete, that this herd of cattle and four horsemen passed safely across the level channel which sustained them as readily as it if were indeed concrete, leaving only the marks of their hoofs on the packed and frozen snow."

"We learned that while nature is bountiful and kind at times it is cruel and destructive. We also learned that we cannot live by our own efforts alone."

"Mr. H___ caught my attention to the discoloration of his left cheek, caused by being frozen while carrying in coal."

"It took ten days to dig out the tracks from Lincoln to Grand Island."

"For years afterward at gatherings of any size in Nebraska, there would always be people walking on wooden legs or holding fingerless hands behind their backs or hiding missing ears under hats." 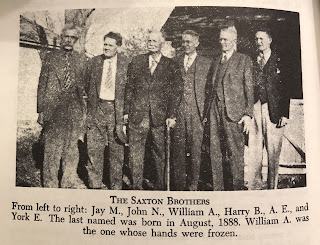 William Saxton (third from left in the photo) was on his way to get a load of hay when the storm struck. After wandering a bit, he located the haystack and burrowed in. "I had my dog with me and he and I crawled in that hole." He spent the night trying to keep from freezing. Imagine his mother's reaction when the dog arrived home ... alone! The family found William, but the doctor "had to take off part of all my fingers. I was sixteen years old ... I learned to use my crippled hands. My souvenir of the big blizzard has not been as great a handicap as one might imagine."

Reading about the real people who not only survived but also thrived in the aftermath of profound challenges is one of the things that draws me to the past. It gives me perspective on my own troubles.

The memoirs of survivors helped me write about Carrie Brown's experience as a teacher trying to see her students to safety through a Nebraska blizzard. With the words of of those who shared their real experiences in the Blizzard of '88 fresh in my mind, I wrote: "Suddenly a terrific wind crashed through the osage hedge on the west side of the road, scooping up snow off the ground and swirling it in the air. It was as if a great white curtain had been dropped over the road ... They were lost in a thick, enveloping whiteness, a cloud of vapor that shut Carrie off from everything around her."


What about you?
Have you survived a natural disaster?
What life-changing lessons did you learn?

In Red Bird, Book 3 in the Prairie Winds series, Carrie Brown survives her Blizzard of '88 ordeal, but not without suffering some life-changing consequences.