From Washouts to Pirates, Travel in 14th-Century England

This post is brought to you by Janalyn Voigt.
Travel in 14th-Century England depended on status and wealth. Most people were villiens, laborers who farmed land they rented from a lord. Travel for them consisted of going by foot to the nearest market town, where they could sell wares and purchase goods. Almost all towns and villages were less than 15 miles apart, which made an easy walking distance with a night’s lodging possible. People walked more in those days and had strong legs, a fact documented by forensic examination of human skeletons from that era.

Those riding on the back of horse, mules, or donkeys could travel on to the next town before needing to stop. Wagons and carriages weren’t a common means of transportation, even for the nobility. Wheeled carts were useful for short trips, but the poor roads limited their value for longer journeys.

Inns weren’t plentiful and didn’t take everyone. The cost of a bed in an inn wasn’t practical for villiens, who had to be resourceful. They could hope to spend the night in a friend’s home. Farms and cottages might offer hospitality. Sleeping conditions could be rough. Rather than finding a bed for the night, a villien would be thankful to sleep on a pallet in the corner of a kitchen. Churches maintained hostels where the poor could stay.

People didn’t usually employ maps, which meant that finding your way on a land journey called for knowledge of the route or hiring a guide. Roads were usually muddy tracks forged from need and frequent use. Those whose course took them along one of the few remaining Roman roads did a little better. Travelers often had to ford streams and rivers. Bridges might be in poor shape, missing, or washed out altogether.


Those travelling the same direction frequently banded together for safety’s sake. Dangers lurked in the form of wolves, boars, or robbers. Most travelers carried weapons for self-defense.

Sometimes people transported goods by rivers, thus avoiding the difficulties of land travel. They paid a toll for this privilege.

Sea voyages were unreliable, cramped, and filthy. Ships carried passengers into other kinds of danger. A storm might drive the vessel off course or send it, and everyone aboard, to the bottom of the sea. Pirates were a known threat.

Travel in the Middle Ages was a challenging business for the average person. It presented inconveniences and dangers and could be quite an adventure.

Escape into creative worlds of fiction with Janalyn Voigt. Her unique blend of adventure, romance, suspense, and fantasy creates worlds of beauty and danger for readers. Tales of Faeraven, her medieval epic fantasy series beginning with DawnSinger, carries the reader into a land only imagined in dreams. Her western historical romance novels have received acclaim from Library journal and Romantic Times.

Janalyn is represented by Wordserve Literary. Her memberships include ACFW and NCWA. When she's not writing, Janalyn loves to discover worlds of adventure in the great outdoors. 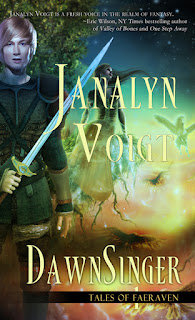 The High Queen is dying… At the royal summons, Shae mounts a wingabeast and soars through the air to the high hold of Faeraven, where all is not as it seems. Visions warn her of danger, and a dark soul touches hers in the night. When she encounters an attractive but disturbing musician, her wayward heart awakens.

But then there is Kai, a guardian of Faeraven and of Shae. Secrets bind him to her, and her safety lies at the center of every decision he makes. On a desperate journey fraught with peril and the unknown, they battle warlike garns, waevens, ferocious raptors, and the wraiths of their own regrets. Yet, they must endure the campaign long enough to release the DawnKing—and the salvation he offers—into a divided land. To prevail, each must learn that sometimes victory comes only through surrender.