Blacksmithing: A Critical Part of Communities of the Past 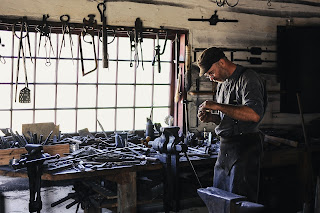 My hero in The Road to Magnolia Glen is a blacksmith. Quinn O’Shea learned the trade back home in Ireland, but then uses his skills once he arrives in the colonies in the Natchez District in 1792.

There’s one thing about authors. We have to know just a little bit about just about everything. And if we don’t know it, we get to research it. So I spent some time researching the tools of the trade of a blacksmith.

The blacksmith was an important part of any community for centuries.

The term blacksmith has been in use since 1250-1300 AD. The blacksmith forged everything from horseshoes to hoes, shovels, candleholders, iron rings, andirons (firedogs) for fireplaces. Typically a male in times past, the blacksmith might also be called a smith, smithy, farrier, plover, horseshoer, shoer. 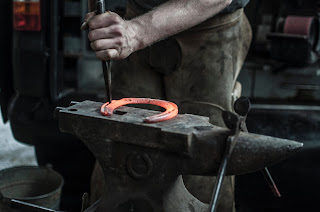 A critically important piece of a blacksmith’s arsenal was his anvil. Anvils are made of cast or wrought iron with a tool steel face welded on or of a single piece of cast or forged tool steel. On a quality anvil, the smith's hammer should rebound with almost as much energy as the smith puts into the downward stroke, ultimately making the smith's job easier and less physically strenuous. There were anvils specifically made for farriers, general smiths, cutlers, chain makers, armorers, saw tuners, coach makers, coopers, and many other types of metal workers.

In addition to an anvil, the blacksmith needed an arsenal of hammers, tongs, fullers, and specialized forming and cutting tools, called Hardy tools.

Depending on the location of the smithy, the forge might be inside or under a lean-to. Or in some cases, a successful smithy might have an indoor forge and an outdoor forge for use in the sweltering summer months. Or even large doors that could be opened to allow a draft of cooler air to flow through and cool the building.

The work was hard and hot and required precision and skill with hammer. The blacksmith had to know how hot to heat the forge, how long to heat the metal, exactly when to cool it in the “slack tub” in order end up with a strong piece of iron when he was done.

While modern mechanized production has made the need for one-off handmade pieces from blacksmiths not feasible for production purposes, the skill is still being practiced here and there, with tough, muscular men (and women) passing the techniques of forging steel from one generation to the other. The Road to Magnolia Glen
by Pam Hillman

Quinn offers to escort his charges safely to Breeze Hill Plantation and his brother’s care, fully intending to seek his freedom elsewhere. But the longer he remains, the greater his feelings toward Kiera grow and the more he comes to realize true freedom might be found in sacrifice. (Coming June 5, 2018 - Available for Pre-order Now.)