Several years ago, I was writing a time travel novel. Because I had two timelines running simultaneously, I needed to outline them so I kind of knew what was going on and when. My heroine got trapped ninety years in the past and had to solve a murder before she became the new victim. 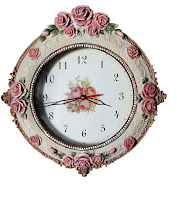 In the present, the hero was trying to figure out how to get her back before the murder. He went over to his best-friend’s place to do the math. I had their conversation all figured out until his friend said, “I assume you’ve figured Daylight Saving Time into your calculations.”

Where did that come from? I certainly hadn’t thought about Daylight Saving Time (DST). One of the things I love about writing is that my characters often surprise me.

I jumped online to do a quick search: “When did DST start?”

But not so simple of an answer.

If asked who invented Daylight Saving Time, what would your answer be? A lot of people would say Benjamin Franklin. He is credited for inventing it. But did he? Let’s take a step back through time. (Pun intended.)

Ancient civilizations had a strange relationship with time. They divided the daylight hours into twelve equal parts. So, in the spring, those parts (or hours) got progressively longer (one could get more done in an “hour”), and in the autumn, they got shorter (less done in and “hour”). The Romans used water clocks and had different scales for different months. At one time of year, an “hour” could be forty-four minutes and at another seventy-five. Sounds like higher math to me. 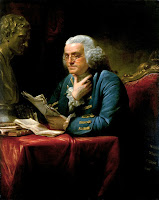 In 1784, Benjamin Franklin wrote a satirical essay on how the Parisians could save money and candles. He suggested the daylight could be better utilized by rising one hour earlier in the morning. No mention of altering time or changing clocks.
The “invention” of DST came much later by two British men almost at the same time, scientists George Vernon Hudson and builder William Willett. In 1895, Hudson proposed changing clocks two hours in October and back in March. It didn’t catch on. Ten years later, he suggested it again, but this time changing clocks ahead twenty-minutes each Sunday in April and then reversing the process on the Sundays in September. That meant changing clocks eight times a year. Twice is more than enough for me.
Though Britain didn’t embrace this idea, in 1908, residents of Ontario, Canada were the first to utilize DST. Several other locations in Canada followed suit.
On April 30, 1916, Germany and Austria began Daylight Saving Time to save resources during WWI. Other European countries quickly jumped on the time-saving bandwagon that same year; Belgium, Denmark, France, Italy, Luxembourg, Netherlands, Norway, Portugal, Sweden, Turkey, Tasmania, Nova Scotia, Manitoba, and Britain. In 1917, Australia and Newfoundland joined the DST crowd.
DST was formally adopted in the U.S. on March 19, 1918. The law also set standard time zones.
Yes! I had my answer.
But . . . 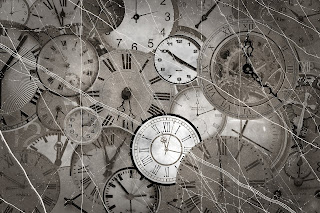 Because of its unpopularity, Daylight Saving Time was revoked after the war. The federal government left it up to states and localities to decide if they wanted to utilize DST or not. Some states like Massachusetts and Rhode Island kept DST as well as cities like New York, Chicago, and Philadelphia (a.k.a. “City Time”). But this meant, some cities would have DST but not the whole state? So, you could be in one time standing in one of these cities, but take a step to the left outside the city limits and you suddenly time traveled an hour. 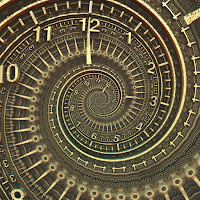 None of this helped me. I still didn’t know if the part of the country my story was set in had DST or not. Nor if the town I modeled my town after did or not. I was left scratching my head.
Then along came WWII and a standardized Daylight Saving Time was instituted year-round from February 9, 1942 to September 30, 1945 and called “War Time.”
From 1945 to 1966, Daylight Saving Time was once again a free-for-all left up to each individual location to decide. Each different place could choose not only if they would have DST but when it would start and stop. This caused a lot of confusion for the TV and radio broadcasters as well as transportation like trains, buses, and commercial flight schedules. Transportation and broadcasting companies had to publish new schedules every time a state or city started or stopped DST. 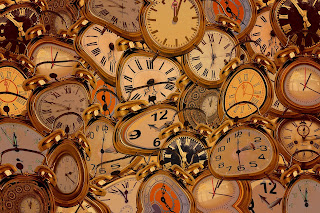 There was even a thirty-five-mile stretch of highway from Moundsville, W.V. to Steubenville, Ohio where a bus driver and the passengers passed through seven distinctive time zones. Seven!
So, if a train left Chicago at two o’clock and traveled fifty miles an hour in any direction for fifty miles, what time would it arrive? Um . . . two o’clock? Did Scotty beam it there? I’m confused. I never liked those train math word problems. 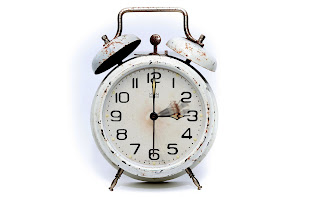 On April 12, 1966, the U.S. federal government signed into law the Uniform Time Act. Whew. Finally, some sanity. More or less. Hawaii and Arizona don’t participate in DST, but the Navajo Nation in Arizona does while the Hopi Reservation, which is surrounded by the Navajo Nation, doesn’t. I would be all kinds of time challenged there.

In the end, I did like I usually do in all my fiction, I made it up. After all, the town was fictional so its time could be as well. If anyone is wondering where to get my time travel story, sadly it’s caught in a time warp and hasn’t been published yet but hopefully at some point in the future.


NEW RELEASE: “Holly & Ivy,” my historical romance novella in A BOUQUET OF

BRIDES COLLECTION, takes place in 1890, in Washington State. It’s about a young woman who accompanies her impetuous younger sister on her trip across the country to be a Christmas mail-order bride and is helped by a gallant stranger.

MARY DAVIS is a bestselling, award-winning novelist of over two dozen titles in both historical and contemporary themes. She has five titles releasing in 2018; "Holly & Ivy" in A Bouquet of Brides Collection in January 2018, Courting Her Amish Heart in March 2018, The Widow’s Plight in July 2018, Courting Her Secret Heart September 2018, &amp; “Zola’s Cross-Country Adventure” in MISSAdventure Brides Collection in December 2018. She is a member of ACFW and active in critique groups.

Mary lives in the Pacific Northwest with her husband of over thirty-three years and two cats. She has three adult children and one incredibly adorable grandchild. Find her online at:
Newsletter Blog FB FB Readers Group Amazon GoodReadsFictionFinder BookBub
Posted by Mary Davis at 12:30 AM