During World War II, the Doolittle Raiders launched sixteen fully loaded B-25's off an aircraft carrier, the first to do the impossible, and bombed Japan by total surprise. The pilots were ordered to fly from Japan to airfields in free China. Each crew member knew that if the Japanese didn't shoot them down they faced the likelihood of running out of fuel before reaching China. 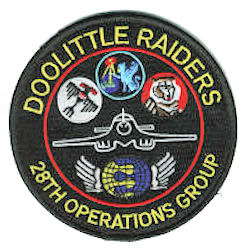 Due to a faulty setting on its stabilizer, Plane #2 launched too sharply from the Enterprise “lost its air and seemed to collapse in flight.” A strong gust of wind came to the rescue and the plane avoided a collision with the ship’s hull which would have sliced it in two.

Travis Hoover, pilot of Plane #2, followed Doolittle’s plane until they reached Japan, but the army intelligence photos they'd brought with them didn’t match what the airmen now viewed. His navigator eventually gave Hoover a new course, but they didn’t spot their primary target, a powder works. They picked a new target but were unable to rise above 900 feet. When their bombs struck, the concussion jolted the plane and smoke rose all around them. If they’d struck the powder works, they wouldn’t have survived.

Trav Hoover followed General Doolittle to the coast of China, where they ran into a storm. The navigator checked his charts and determined they were in Japanese territory. They headed southwest and discovered mountains which were missing from their maps. They attempted to climb to a higher elevation, but each time they did, the left engine died. Now “they were too low on gas to climb, and too low in altitude to jump.” Trav had no choice but to find a place to land. He brought the plane down in a rice paddy, and the airmen set it on fire so it wouldn’t fall into the hands of the enemy. The airmen knew the Japanese forces were very close, so they headed west through the mountains, guided by their dimestore compasses.

Not knowing whom they could trust, the Raiders avoided contact with the locals, and all five men managed to survive on “one canteen of water, one ration, and a few candy bars” for three days. They made their way through the mountains but ran out of food and turned to the Chinese for help. They discovered that the Japanese had just moved out of their area the week before. Chinese guerrilla soldiers took the airmen in, but they were unable to communicate with each other until a young man who spoke a little English asked them how he could help. Tung-Sheng Liu, a former university student from Beijing, was just traveling through the area, using the back roads to avoid the Japanese and had stopped overnight at a small hotel. He stayed with the airman and directed them away from areas where they would have been captured by the enemy.

Tung-Sheng Liu and the Chinese guerillas led the five Raiders to Chuhsien, one hundred miles away. They traveled over trails through the mountains at night, covering ten to fifteen miles a day. Housing was arranged by the local guerrillas, and Chinese bearers carried the men in sedan chairs. After a week in Chuhsien, two buses arrived and took the airmen to Hengyang where they stayed for another week until an American C-47 landed and took them to Chungking and the American consulate. Tung-Sheng Liu immigrated to the U.S. and was named an honorary Doolittle Raider.

Davey Jones, pilot of Plane #5, discovered that one of his tanks was short by thirty gallons, but the hose had been turned off “and he could either have his plane pushed overboard or get in line and join the mission.” He joined the mission. Plane #5 crossed Tokyo Bay “and headed for their assignment on the far side of the city.” They encountered machine-gun fire and ack-ack. Hundreds of tracers followed their plane, so Davey Jones pulled up to 1200 feet, and they chose a new target—an oil storage facility and a power plant—and they were successful. Antiaircraft fire was intense, but they made it out of the city.

Using dead reckoning, Plane #5 arrived at the coast of China. Davey Jones determined they were close “to land because the color of the water changed.” He pulled the plane up to 5000 feet. They dropped a parachute flare and spotted a river and discovered they were over mountains. They had no choice but to bail out, which none of them had done before. Because of the bad weather and zero visibility, Gunner Joe Manske didn’t think he was falling. He thought he was just suspended. Davey was the last airman out the hatch and was blown against the fuselage. He hung on with his arms stretched out and then pulled the ripcord.

Davey Jones and his co-pilot, Hoss Wilder, ran into each other at a railroad station house, and the Chinese took them up to the town of Yushan in a railroad boxcar. Jones and Wilder were greeted by the mayor, thousands of people and huge banners that said, "Welcome brave heroes! You've struck a blow for us." All five crewman made it out of China safely.

Come back on the first of next month for more Doolittle Raider stories.

Giveaway:  Leave a comment below by Wednesday, 4/4, at 8:00 PM EST and earn a chance to win a copy of Kristy Cambron's brand new novel, The Lost Castle, set during the French Revolution, World War II, and the present day. Earn an extra chance to win by sharing this post on social media. Be sure to leave your e-mail address in your comment and let me know if you've shared.