Fun Town Names and How They Got That Way

I'm writing a new series based in Texas and I've been studying maps.  Texas sure does have some odd, charming and altogether weird or funny town names. Here's just a couple that caught my eye.
Cut and Shoot, Texas 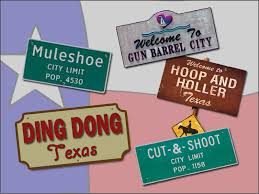 Believe it or not, this town name was the result of a church fight.  No one really knows what the dispute was about. Some say it was over the new steeple; others say there was a disagreement as to who should preach there. Still others insist it was over church member land claims. Whatever the reason, the meeting at the church turned violent.


A small boy at the scene declared he was going to take up a tactical position and “cut around the corner and shoot through the bushes.”
Later, after the matter was taken to court, the judge asked a witness where the confrontation had taken place.  Since the town didn't have a name the witness described the location the best way he knew how. “I suppose you could call it the place where they had the cutting and shooting scrape,” he said, and the name stuck.
Ding Dong, Texas (which just happens to be in Bell County)


As the saying goes, if you find yourself in Ding Dong, you had to be looking for it.  Two early residents Zulis Bell and his nephew Berth ran a general store and hired a local painter named C.C. Hoover to make a sign for their business. Hoover illustrated the sign with two bells inscribed with the Bells’ names, and then wrote “Ding Dong” coming out the bottom of the bells.  No one remembered the Bells but they sure did remember Ding Dong and the name stuck.
Jot-Em-Down, Texas
This is a small unincorporated community in Delta County.The town's name comes from the name of a fictional store in the Lum and Abner radio show from the 30s and 40s.
Dime Box, Texas
The name originated from the practice of leaving a dime in the box at Brown's Mill to have a letter delivered.  The practice stopped when a post office was opened in 1877.
The following town isn't in Texas, but I just love the name—and of course the love story.

Total Wreck, Arizona.
Total Wreck was discovered by John L. Dillon in 1879.He named it such because he thought the ledge the mine was on looked like a total wreck. A man once got into a shooting at Total Wreck and survived because the bullet lodged in a stack of love letters he had in his jacket. He later married the girl who wrote the letters!


Watch out for Haywire!
Haywire is the name I chose for my fictional town in Cowboy Charm School (Coming September 2018).  You'll have to read the book to find out how the town got its name.
What town have you visited that had the strangest name?
For me it would have to be Monkey's Eyebrow, Arizona
(and I have no idea how it got its name).

More shenanigans in the town of Two-Time, Texas! 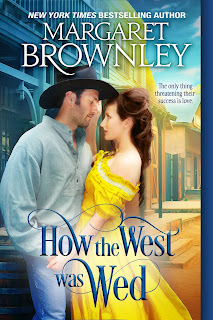 Amazon
Posted by Margaret Brownley at 1:00 AM