The Best Thing at Early Fairs
by Martha Rogers

I attended the State Fair of Texas in Dallas every year I was in school and many times after that. Besides the rides, I loved the food we found there from cotton candy to funnel cakes. Now, everything from butter to Oreos is fried.

As I researched my book about the St. Louis World’s Fair in 1904, I ran across interesting facts about one of my favorite treats from my youth. Candy apples are a staple at most fairs either with the hard candy coating or the smooth caramel one. 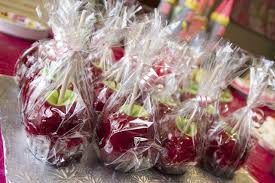 The traditional red candy apples we see today are said to have been invented by William W. Kolb, a New Jersey candy-maker, in 1908. While experimenting with red cinnamon candy he made for Christmas, he dipped some apples into the mixture and displayed them in his candy shop. They sold for 5 cents each and became an almost instant hit. It didn’t take long for the treat to spread across New Jersey and then to circuses and candy shops nationwide.

Candy makers began experimenting with colors and coatings which is how the caramel or taffy apple was born.
Here are examples of some of the colors which all 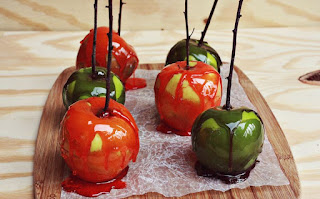 have a different flavor as well. 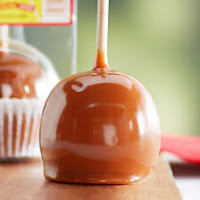 The caramel apple came along in the 1950swhen Dan Walker experimented with Kraft caramels and apples. He simply melted down left over caramels and dipped apples into the mixture. Some experimented with toppings for the glaze and
flavors as well as the aforementioned colors for the coatings. Still, the traditional color for candy apples is red and cinnamon flavored. Coney Island vendors developed a softer coating and flavored it with Cherry. These are referred to as Jelly Apples.

One of my favorites is the nut covered one seen below. 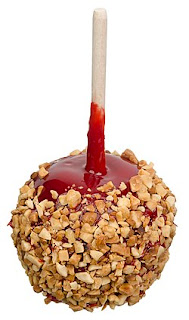 1. Candy apples are of the hard candy coating variety, not caramel or toffee.
2. They’ve been around over a hundred years.
3. The first ones were for display only by Kolb in his candy store.
4. Candy apples are easiest to make in the fall not only because of the apple harvest, but also because of the lower humidity.
5. Traditional candy apples are cinnamon flavored.
6. In the first half of the 20th century, candy apples were given out for trick-or-treat. This practice stopped in the 1970s when people began adding dangerous things like razor blades to the apples.
7. Candy apples sweeten holidays around the world. They’re not just American.
8. Certain apples, like Fuji or Granny Smith, are better suited for the treat. They are crisp and hold up better with the coating.
9. They may be healthier than you think, but it depends on what you put into the coating while making it.

You probably own something or have owned something that got its color name from the candy. Candy apple red was and still is a favorite color for cars and other things like fingernail polish, helmets, and even bicycles.

The coating is usually a combination of sugar, corn syrup, cinnamon candies and red food coloring which is cooked to a hard crack stage. The apples are then dipped into the mixture and set aside to allow the gel to cool and harden around the apple.

Recipe for Candy Apples from the Just A Taste website
https://www.justataste.com/candy-apples/

Wash and thoroughly dry the apples (See Kelly's Notes below). Insert the lollipop sticks or popsicle sticks so that they are firmly positioned in the apples. Set the apples aside on a cookie sheet lined with wax paper and coated with cooking spray.
Combine the sugar, corn syrup and water in a heavy-bottomed saucepan over medium heat. Bring it to a boil and cook the mixture until a candy thermometer reaches 300ºF (the hard crack stage).
Remove the candy mixture from the heat and carefully stir in the red food coloring (it may splash, so stand back). You may have to add more than the designated ½ teaspoon, depending on the quality and strength of your food coloring.
One by one, carefully dip the apples into the candy mixture, swirling to coat them thoroughly and allowing any excess to drip back into the pan. Transfer the coated apples to the prepared cookie sheet and allow them to cool until the candy has fully hardened. 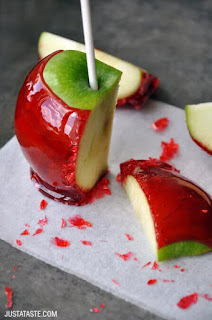 Many people slice the apple rather than try to bite into the hard candy outer coating. It's easier on the teeth, too.

What are your favorite foods at the fair or a carnival?

Martha Rogers is a multi-published author and writes a weekly devotional for ACFW. Martha and her husband Rex live in Houston, Texas where they are active members of First Baptist Church. They are the parents of three sons and grandparents to eleven grandchildren and great-grandparents to four, soon to be five. Martha is a retired teacher with twenty-eight years teaching Home Economics and English at the secondary level and eight years at the college level supervising student teachers and teaching freshman English. She is the Director of the Texas Christian Writers Conference held in Houston in August each year, a member of ACFW, ACFW WOTS chapter in Houston, and a member of the writers’ group, Inspirational Writers Alive.
Find Martha at:  www.marthawrogers.com