By Marilyn Turk
Beginning in 1940, many British and Canadian Airmen found themselves in the unfavorable position of being German prisoners of war.
As a result, a special unit of the British secret service called MI-5 worked on ways to help these prisoners escape. One of the most important things the POWs needed were maps to show them how to find “safe houses” where they could go for food and shelter once they escaped.   But paper maps had some disadvantages. They made noise when opened, they wore out quickly, and if they got wet, they were ruined. Then someone had the ingenious idea to print the maps on silk. It was durable, could be folded into tiny pieces and was noiseless.  Only one British manufacturer, John Waddington Ltd., had perfected the technology of printing on silk. When contacted, the company was eager to contribute to the war effort.  By pure coincidence, the same company was also the United Kingdom’s licensee for the American board game Monopoly.  Germany complied with the Geneva Convention by allowing humanitarian groups like the Red Cross to distribute care packages to the prisoners. One of the categories of items that could be included in those packages was “games and pastimes.”
The maps were produced under extreme secrecy and were keyed to each region of Germany, Italy, and France – where Allied POW camps were located. These maps could be folded into such tiny dots that they would actually fit inside a Monopoly playing piece. 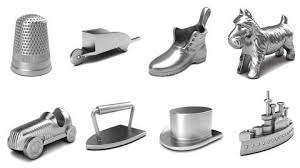 Taking advantage of this opportunity, the Red Cross unknowingly helped the prisoners escape by including the Monopoly game which not only included a map, but several other important items that were needed:
-     *  A playing token, containing a small magnetic compass
-     *  A two-part metal file that could easily be screwed together
-     * Genuine high-denomination German, Italian, and French currency, hidden within the piles of Monopoly money! 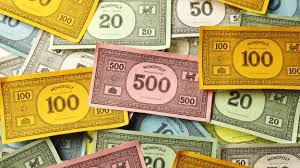 Before they took off, British and American air crews were taught how to identify a 'rigged' Monopoly set by means of a tiny red dot cleverly placed to look like an ordinary printing glitch that was located in the corner of the Free Parking square. Once they obtained the "playing pieces" within them, the soldiers were instructed to destroy the games in order to keep the ruse a secret from the Axis.

Of the estimated 35,000 Allied POWs who successfully escaped, an estimated one-third were aided in their flight by the special Monopoly sets. Everyone who did so was sworn to secrecy indefinitely, since the British Government might want to use this highly successful ruse in still another, future war. The story wasn't declassified until 2007, when the surviving craftsmen from the Waddington company, as well as the firm itself, were finally honored in a public ceremony.

Next time you play Monopoly, remember how important a game can be. 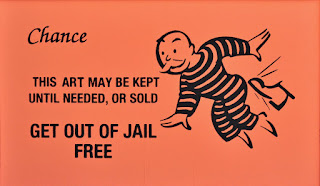 Leave a comment for a chance to win Marilyn's new release:

Lexie Smithfield thought she left danger behind her at Jekyll Island when she moved to Manhattan to pursue a nursing career. But it’s 1942, and the United States has entered the war. What will happen when Lexie crosses paths with Nazi spies? Is her life in jeopardy? What is it about her new friend that seems suspicious? And who will protect her now that her fiancé has gone overseas?