What Happened to the Doolittle Raiders after Their Escape from China? Part 1 & A Giveaway


Eighty Army Airmen formed the sixteen crews known as the Doolittle Raiders who bombed the Japanese homeland in April of 1942. Many consider this operation to be a turning point in WWII because it boosted the morale of the allies and humbled the Japanese at a time when they had seemed invincible.

After bombing Japan, three of the Raiders died during crash landings and bailouts in China, eight were captured by the Japanese (three were put to death and one died of starvation), five landed in the Soviet Union and were interned until they escaped through the Middle East one year later, and the rest were assisted inland by the Chinese.

So what happened to these airmen after their infamous raid and escape from China?

Crew Members of the Ruptured Duck

Pilot Ted Lawson who was severally injured during the crash landing of the Ruptured Duck survived after Doc White of Plane 15 amputated his leg at a remote missionary hospital in China. The Chinese escorted White and Lawson and his other injured crew members to safety, often just ahead of the Japanese pursuing them. Lawson was flown to the United States where surgeons at Walter Reed rebuilt his jaw and performed additional surgery on his leg.

One year later Lawson published Thirty Seconds Over Tokyo, a book about the Doolittle Raid and his experiences in China. A Hollywood movie by the same name was produced and released by MGM in 1944. The black-and-white movie was a hit and won an Oscar and is still available for purchase today. Lawson died at the age of 75. 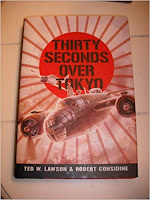 When MGM needed a stunt pilot for the movie A Guy Named Joe, the army sent former co-pilot Col. Dean Davenport. Davenport also served as technical adviser during the filming of Thirty Seconds Over Tokyo. He completed his WWII service in Alaska and lived to the age of 81. Lt. Charles McClure convalesced with Ted Lawson at Walter Reed Hospital and was hospitalized until June of 1943. He became a navigator instructor but retired with a physical disability in June of 1945. He lived to be 82.

Lt. Bob Clever recovered from his head and face injuries from the Ruptured Duck’s crash landing, but was killed on November 20, 1942, the day his flight group departed from Fort Wayne, Indiana. His "airplane spun out climbing up through the clouds." He was 28. Sgt. David Thatcher, only 20-years old when he served as gunner on the Ruptured Duck, was the only crew member able to walk after the crash landing. He kept his fellow crewmates alive by tending to their injuries and collecting and giving them rainwater. He was the only Doolittle enlisted man to receive the Silver Star for his gallantry and courage. Thatcher was sent to North Africa and Europe and survived 26 bombing mission. He contracted hepatitis and malaria with ended his military career. He died in 2016 at the age of 94.


Crew Members of the Hari Kari-er

The crew members of the Hari Kari-er bailed out in Japanese controlled territory eighty miles from the coast. Thanks to the help of the Chinese, they each made it safely out of China.

In early June of 1942, Pilot Ross Greening flew back to the states on the same plane with the Ruptured Duck wounded airmen. Along with many other Raiders he was sent to North Africa later that year, and he was based in Marrakech, Morocco. By July of 1943 he had completed 125 hours of combat, and on July 17th he took part in a five-hundred-craft run on the Naples, Italy, shipyards.

Greening’s plane was hit by anti-aircraft fire, the cockpit crashed open, and pieces of the plane fell off. The fuselage ripped apart, the plane burst into flames and the men ran to the bomb bay to bail out. The plane was thrown sideways by another burst, and the men were tossed out. Greening floated into the line of fire and "yanked his cords in every direction to" get away. He landed in the smoking crater of Mount Vesuvius and was knocked unconscious. He woke up with his hip out of joint, and the Nazis popped it back in place before carrying him out of the volcano piggyback. Despite his many injuries, he was forced to crawl from a truck to the inside of a jail while an Italian mob spat and threw stones at him.

After Italy surrendered on September 8, 1943, the Wehrmacht loaded the POWs from Greening’s prison on a northbound train. The Allies attacked the train and Greening "was blown out of the carriage by a direct hit, and in the chaos he took off." He wandered in the mountains for a few days and then hid on a train until he reached Verona. An Italian family who had lived in the U.S. for many years aided him until it became too dangerous.

Greening hid in a cave near Venice with two escaped POWs from New Zealand until a German patrol searching for partisans found them by accident. He spent the rest of the war at Stalag Luft I, 125 miles north of Berlin where 9000 POW aviators were held. Greening "gave the prisoners art lessons and taught them to make their own supplies." He became commanding officer, and "when the Red Army finally liberated the camp in 1945, the Nazi prison chief surrendered to Greening to spare himself the Soviets’ known brutality."

Greening’s former co-pilot Ken Reddy died in an airplane accident near Little Rock, Arkansas on September 3, 1942, at the age of 22. The three other Hari Kari-er crew members were assigned to the China-India-Burma Theater. Lt. Kappeler and Sergeant Gardner were sent on a mission from India to bomb Burma and then land in Kunming, China. After they dropped their bombs, "they were immediately attacked by Japanese planes and ducked into the clouds to evade, but weren’t familiar with the area’s mountainous terrain." They tried to cross the hump (the Himalayas) at too low an altitude, and only Lt. Kappeler’s plane, out of the six, made it to China. Sgt. Gardner was killed in action on June 3, 1942 at the age of 22.

Lt. Kappeler survived to fly fifty-three combat missions out of England, France, and Belgium and died in 2010 at the age of 96. After the Doolittle Raid, Bombardier Second Lt. Bill Birch was sent state-side and participated in War-Bond-selling drives and completed flight training in Texas. As a result of an airplane accident, he spent almost two years in a hospital and didn’t have an opportunity to fly again before the war ended.

The Official Site of the Doolittle Tokyo Raiders - http://www.doolittleraider.com 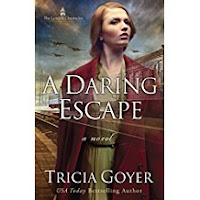 Giveaway: Leave a comment below by Tuesday, July 3, at 8:00 PM EST, and earn a chance to win Tricia Goyer's WWII novel A Daring Escape. You can earn an extra chance to win by sharing this post on Social Media. Don't forget to leave your e-mail address and let me know if you've shared the post.