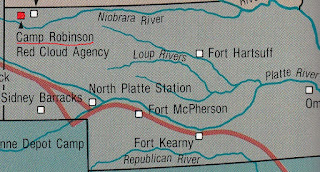 Have you visited western Nebraska? If not, you've missed stunning vistas and a chance to stay at Fort Robinson, known to Crazy Horse and Red Cloud, Spotted Tail and Dull Knife, Buffalo Soldiers, German prisoners of war, war dog trainers, and champion equestrians.

In 1874, when tensions ran high at Red Cloud Agency--named for a great leader of the Oglala Sioux--the agent called for troops from Fort Laramie. Both cavalry and infantry arrived in March of that year, resulting in the establishment of Camp Robinson, named for Lt. Levi Robinson who'd been killed the previous month.

Men stationed at Camp Robinson would be caught up in ongoing tensions with both The Oglalas and northern Sioux at Red Cloud agency and Spotted Tail's Brules at Spotted Tail Agency. By summer of 1874, it was obvious the troops' presence wasn't temporary. Soldiers were building log barracks and other permanent buildings. By 1878, Camp Robinson had become Fort Robinson. The death of Crazy Horse and the tragic "Cheyenne Outbreak" took place here.

Throughout the 1880s, routine life at Fort Robinson involved target practice, ceremonies, inspection--and building. New adobe officers' quarters and new barracks were added, and the Buffalo Soldiers arrived. Second Lieutenant Charles Young was among them. The son of former slaves, Lt. Young was a recent graduate of the U.S. military academy at West Point.

From 1884 to 1887, Dr. Walter Reed (who gave his name to the Walter Reed Army Medical Center in Washington, D.C.) was Fort Robinson's post surgeon.

During WWII, Fort Robinson became a reception and training center for war dogs. Over 5,000 dogs were trained in trail and attack work, sentry duty, message bearing, etc. before the reception center closed in 1946.

German POWS housed at Fort Robinson during WW II were taken on farm details and worked in the fort's kitchen, bakery, and hospital. They also helped with routine care of the war dogs. At one time, the entire Afrika Corps Band was imprisoned at Fort Robinson.

Today, visitors to Fort Robinson can stay in historic officers' quarters and barracks. They can visit the post museum, take trail rides up into the surrounding bluffs, go on Jeep excursions, and participate in a plethora of family-oriented activities. Learn more here: http://outdoornebraska.gov/fortrobinson/

All three books in Stephanie's Pine Ridge Portraits series (Secrets on the Wind, Watchers on the Hill, and Footprints on the Horizon) are set at Fort Robinson. 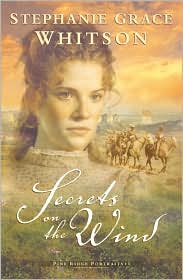 Secrets on the Wind was not only on the CBA best seller list when first released but also a finalist for the Inspirational Readers Choice Award. The e-book is only $2.99 but it will be FREE October 11-13 at: https://www.amazon.com/Secrets-Wind-Pine-Ridge-Portraits-ebook/dp/B00N1FSYOK/ref=sr_1_1?ie=UTF8&qid=1539047322&sr=8-1&keywords=Secrets+on+the+Wind

It seems to be a typical U.S. Army post in 1878, but in the midst of regimented daily routines ...


and among them all, a woman named Granny Max feels called to embrace people in need and the secrets that cripple them.