The Birthplace of George Washington Carver


Tucked away in the Ozark forests of Missouri, is a farm. With a trickling creek, mossy forest, and acres upon acres of farm fields, this patch of land was the birthplace of one of the most influential men of his time: George Washington Carver.
George Washington Carver was born to a slave woman on the Carver homestead around the year of 1861. The homestead was owned by a white man named Moses Carver. The slave cabin George was born in was originally built for Moses and his wife as a temporary home. When their farmhouse was finished, they passed the tiny cabin on to their slaves. The original building is long gone, however the park has reconstructed an imprint of the cabin to demonstrate how small it was.


During the tumult of the Civil War, bushwackers raided the area and took the infant George and his mother. Mr. Carver sent a bounty hunter after them, but while the man was able to recover George, his mother was never found. The infant had a terrible case of whooping cough, so Mr. and Mrs. Carver took George into their home and nursed him back to health. After slavery was abolished, the Carvers raised both George and his brother James as their own children. They even encouraged George to pursue intellectual pursuits, which was not allowed in Diamond Grove, Missouri.

Here in Diamond Grove is where George developed his love of botany. At a very young age, he became known as the "plant doctor".

"Day after day I spent in the woods alone in order to collect my floral beautis and put them in my little garden I had hidden in the brush." - George Washington Carver in a letter.

George studied the uses of plants and discovered many that could be used to help the sick.


"Sick plants were...left for treatment, and I often went to houses, and prescribed for them, much as a physician prescribes for his patients." -George Washington Carver in a magazine article.

It was also here that George had an experience with God and found the calling that would guide his life through torrents of difficulty to become one of the most influential botanists in American history.

"I was just a mere boy when I was converted, hardly ten years old. There isn't much of a story to it. God just came into my heart one afternoon while I was alone in the loft of our big barn while I was shelling corn...one of our neighbors, about my age, came by one Saturday morning and in talking and playing he told me about going to Sunday school. I was eager to know what a Sunday school was. He said they sang hymns and prayed. I asked him what prayer was...I do not remember what he said...as soon as he left, I climbed up into the loft, knelt down by the barrel of corn and prayed as best I could. I do not remember what I said. I only recall that I felt so good I prayed several times before I quit...This was my simple conversion, and I have tried to keep the faith." -George Washington Carver in a letter.


Also at a young age, George felt he found what God wanted him to do: obtain as much learning as he could, and use it to help his people. He left Diamond Grove, Missouri at 13 years old so he could attend school, and that was only the beginning of his fascinating journey. George went on to become a leading researcher, lecturer, and inventor. He was the one who developed many uses of the peanut and one of the main reasons that Georgia is known for its peanut industry. 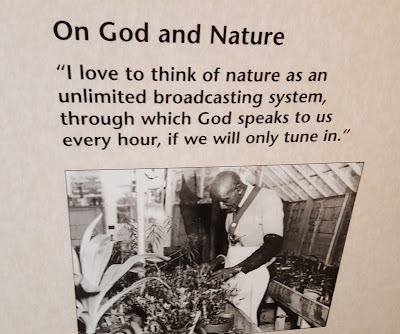 But this little homestead, in the middle of rural Missouri is where it all began. If you're ever passing through Diamond Grove, Missouri, this is a wonderful stop. The beauty will astound you, and the history inspire you.