The stagecoach driver grasps your hand and helps you onboard. You blink in the sudden dimness. The day is bright, but leather curtains conceal the window openings. Light slants in through the door and twin rectangles beside it. None of the windows contains glass to keep out the dust or weather. The openings will, hopefully, let out odors from the unwashed passengers already aboard the coach. These blink owlishly at you and your brother, the male relative escorting you on this journey.

You glance at your brother. Most of the seats are occupied or show signs of occupancy – satchels and shawls left to mark the spots of the passengers waiting to board again behind you.

A man holding a can tips his bowler hat to you but addresses your brother. “May I offer my seat for the lady?”

“Thank you,” your brother replies and guides you forward, causing you to stub your toe against one of the many mailbags strewing the floor. A bonneted woman smiles her approval at the man and shifts closer to a young girl of perhaps twelve who greatly resembles her. You thank the woman for allowing you to sit beside the window, then settle against the button-tufted leather upholstery faced in the direction of travel. The man and your brother sit across from you in the backless middle seat. The woman breaks off a piece of bread and passes it to the man, who is no doubt her husband. You know better than to suggest they sit together, not when stagecoach etiquette calls for gentlemen to yield the best seats to the gentler sex.

After the rest of the passengers take their places, the driver calls out and a whip cracks. The stagecoach lurches forward. Hooves clop, boards rattle, and chains clank in steady rhythm. You sigh and settle against the backrest. It’s too noisy for conversation. A mile or more goes by, and the constant vibration wears on you. The driver shouts a command to the horses, the stagecoach slows but then jolts into a dip. Your brother gives you a questioning lift of his brows, and you return a smile.

The stage bumps along down a road so rough that you stop smiling. One particularly nasty bump unseats your brother and the other men on the middle seat. They sprawl in a tangle of arms and legs amid the mailbags. You cry out, but your brother climbs back onto the seat with a grin. “Hold on!” he warns.

You are already clutching the leather strap hanging beside the window with a death grip, but you nod reassuringly.

The stagecoach slows to a stop, and the driver shouts the name of the waystation. The door opens, and sunlight makes you blink. You alight and enter a low-slung building with a dirt floor that smells of coffee.

Your brother seats you at a scarred oak table and brings you a steaming cup. “Drink fast. We board again in ten minutes.”

“What? No longer?” You frown, taken by regret. You’ve barely begun this journey but already wish it over.

“We’ll change the horses every ten miles or so. We should get out each time and walk about. Those who do fare better, I hear.”

The idea doesn’t appeal with weariness setting in, but you agree.

Although the day is fair, the temperature is chilly, and you are grateful for the coffee, strong though it may be. Other passengers bend over bowls of stew or purchase food to carry away with them.

Time passes far too quickly, and soon you climb into the coach again. The day passes in a series of stops broken by long stretches with dust filtering in through the windows beside the door. Tossed about by the swaying and bumps, you surrender to exhaustion. The constant vibration feels like someone shaking you awake, however.

You despair of ever sleeping again.

I decided to celebrate the release of my western romance novel, Stagecoach to Liberty, by entertaining you with a vicarious journey. Embedded in the story are details about stagecoach travel, which was challenging at best, untenable at worst. Louis McLane, a manager employed by Wells, Fargo and Company, described stagecoach travel in an 1865 letter to his wife. "I thought staging looked very well to the lithographer, but was the devil in reality."

Mark Twain gave a humorous account in Roughing It, his autobiographical tale, that confirmed Mr. McLane’s analysis. "Every time we avalanched from one end of the stage to the other, the Unabridged Dictionary would come too; and every time it came it damaged somebody. One trip it 'barked' the Secretary's elbow; the next trip it hurt me in the stomach, and the third it tilted Bemis's nose up till he could look down his nostrils - he said. The pistols and coin soon settled to the bottom, but the pipes, pipe-stems, tobacco, and canteens clattered and floundered after the Dictionary every time it made an assault on us, and aided and abetted the book by spilling tobacco in our eyes, and water down our backs."


About Stagecoach to Liberty 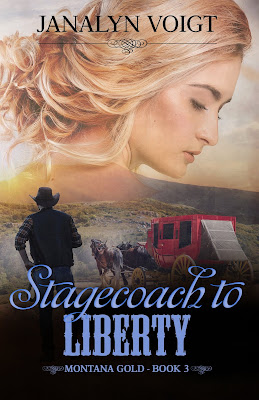 Can a desperate young woman trust the handsome Irish stranger who wants to free her from her captors?
Elsa Meier, a young Hessian woman newly in America, falls into the hands of soul merchants intent on forcing her into prostitution.

The last thing that Connor Walsh, an Irishman returning to his ranch after a bout of amnesia, wants is trouble, but he suspects that Elsa isn't wholeheartedly traveling with her companions.


Based on actual historical events during a time of unrest in America, Stagecoach to Liberty explores faith, love, and courage in the wild west.

Learn more about the Montana Gold series.
Posted by Janalyn Voigt, escape into creative worlds of fiction. at 12:01 AM