The Maxwell House Hotel and Coffee


This post is dedicated to all you folks who can't start the day without a cup of coffee. I'm a chocolate milk kind of girl myself, but hubby enjoys a cup of hot, black coffee every morning. Maxwell House--that "good to the last drop" coffee--was one of his favs a few years ago.

When we moved to the Nashville area last year, I was surprised to learn Maxwell House coffee has its origins here. And not only that, it was named after a famous hotel. The story goes...

Back in 1859, Colonel John Overton Jr. began building an enormous hotel in downtown Nashville. The outbreak of the Civil War delayed construction, although the unfinished hotel was commandeered by the Union Army who used it as a barracks, prison, and hospital. Five stories high with 240 rooms, it would become Nashville's largest and most famous hotel in its day.

From the 1890s into the twentieth century, the hotel was at the center of Nashville's social and political life. It was well-known for its holiday feast featuring delicacies such as Calf’s Head, Leg of Cumberland Black Bear, and Tennessee Opossum. Sadly, on Christmas night 1961, the hotel caught fire and was destroyed. It was never rebuilt, although a new hotel bearing the same name was built in a different location some years later.

But what about the coffee? How did that come about? 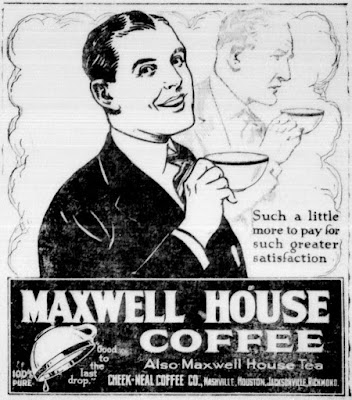 In 1873, Joel Owsley Cheek, a 21-year old man from Kentucky, moved to Nashville to seek his fortune. He worked as a traveling wholesale grocer for a while then set up his own wholesale grocery firm. During this time he and his business partner, Roger Noelly Smith, a British coffee broker, began experimenting with different coffee blends to come up with their own unique flavor. In 1892 Cheek approached the food buyer for the Maxwell House Hotel and gave him 20 pounds of the special blend for free. Guests raved over the new "Maxwell House coffee." When the free coffee ran out and the hotel went back to serving its usual brand, customers complained and wanted Cheek's coffee. From that point on, the hotel bought Cheek's blend exclusively, inspiring Cheek and Smith to name their coffee Maxwell House. By 1925, the brand was cited as the most well-known coffee in a study of consumer goods.

Who claimed it was "good to the last drop?"

For a while, legend had it President Theodore Roosevelt, while dining at The Hermitage, President Andrew Jackson's home, tasted Maxwell House coffee and declared it good to the last drop. Maxwell House began using it as a slogan, at times attributing it to Roosevelt. However, Coca Cola used the same slogan in their ads around the same time, shedding doubt on the legend. Maxwell House eventually admitted the famous words had not come from Roosevelt, but "good to the last drop" is still a registered trademark of the coffee brand and appears in its logo today.

And that, my coffee-drinking friends, is the history of Maxwell House, the hotel and the coffee. The Maxwell House hotel makes an appearance in the new historical novel I'm currently writing, so stay tuned for a future publishing date.

Are you a coffee drinker? What's your favorite brand and how many cups a day do you drink? 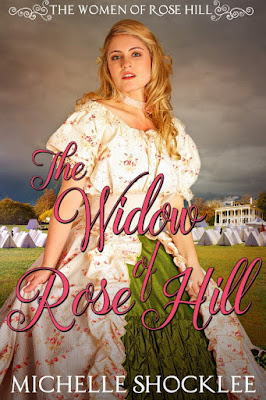