Christmas on the Plains and Molasses Candy 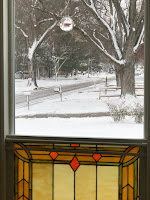 Here in Nebraska, we nearly had a white Thanksgiving. The  snow melted before "Turkey-day," but winter storms never fail to set me to thinking about what winter was like for pioneer settlers. And they always make me thankful I live in a day of central heating where all it takes to keep warm is a setting on a thermostat.

In December of 1866, troops sent to aid the survivors of the Fetterman Massacre "waded or dug their way through snows, knee deep, and often waist deep, while the mercury ranged from 25 to 40 degrees below zero." They arrived at 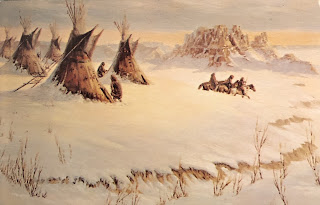 their destination with frostbitten hands and feet. In January, when some of the women were transported to safety, the mercury on their only thermometer froze in the bulb, so they no longer knew how cold it was. They "sliced" frozen bread with a hatchet. 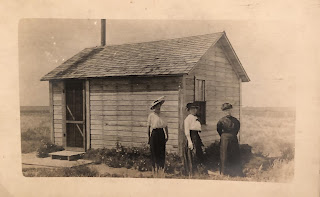 Residents of sod houses often mentioned how much warmer the three-foot-thick sod walls kept their homes. In fact, some lamented the loss of that insulation when they moved into their first farmhouse with only boards, plaster, and lathe to hold in the warmth from the wood stove in the kitchen.

In 1913, when Bert Snyder went for more coal during a blizzard, "his eyes were frozen shut before he'd gone half a dozen steps, and the snow was so fine and thick that he could barely breathe." After the storm when Bert saddled his horse to see about the cattle on his ranch, the drifts were so high and frozen so solid that he rode right over the tops of fences.

What was Christmas like for those pioneers? Jessie Short Segard, author of From Dugout to Mansion wrote this about Christmas, 1886: "...some Christmases we had nothing at all. One Christmas Mother had made sorghum taffy and made some into rings and other things of the taffy. That was the extent of our gifts that year. Here's a recipe I found for molasses candy. Let me know if you try it!

Two cups of molasses, one cup of sugar, tablespoonful of vinegar, small lump of butter. Boil rapidly until it drops brittle into cold water, pour into buttered tins, and when cold pull till it is white.

Jessie's memoir continues, "Another Christmas Aunt Sally had received a barrel of apples from Iowa and brought one apiece for us. What a treat that was, a whole apple for each of us."

When Jessie's family moved from Kansas to the village of Brainard, Nebraska, her father had an idea for decorating a Christmas tree. "Before Christmas that year Father told us children to save all the tissue paper we could find in the street. Everybody was a litterbug then and it was easy to find white, yellow, red and blue tissue where stores tossed their rubbish. Father got a branch limb of a tree. We covered it with strips of those papers and he nailed it to the wall and that was our first and only Christmas tree we ever had. We thought it was very beautiful.

Christmas morning we found on that tree overshoes for Father, I don't remember what for Mother, a wool cap for us two girls, and I forget what for the boys except that we all got a little pocket mirror and a sack of hard candy. The aid society had given us those things and Father had not let us children know about it. Oh! You see, it takes very little to make a real poor family happy." 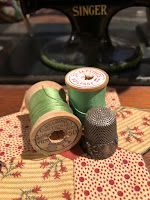 At Christmas in 1884, Jessie was fourteen and a half. "I wanted so much to buy a Christmas gift for mother but only had one nickel. The only thing I could think of to get her was a spool of sewing thread but to her it was a good useful gift."

What about you? Do you have memories of "lean" Christmases? Do you have a favorite gift that was inexpensive and yet cherished because of the sacrifice made to acquire and give it?

May God grant us all an attitude of thankfulness for the abundance He supplies. Merry Christmas! 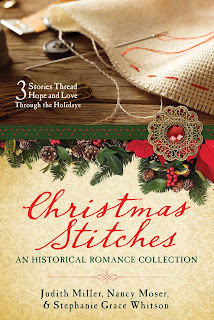 My heroine in Mended Hearts, a novella included in the collection at left, has gone through a rough year. She's felt shunned and abandoned, but as Christmas looms, she hopes a change is on the horizon.

To win a free copy of Christmas Stitches, 1) share the link to this blog post with a friend and then  2) e-mail stephanie@stephaniewhitson.com with topic line SHARED and your shipping address in the body of the e-mail. I'll select and notify the winner on December 15. Merry Christmas!