Last year, I wrote about the legend of Santa Claus and its ties to my home state of New York. This year, I'm taking a departure South, that is to say, the South Pole, to explore the legends of Santa's controversial helpers for those designated to the Naughty List.

Black Pete
Last year I explored the early Dutch legend of Sinterklaas, the saintly night visitor who left treats for the good children in their shoes and stockings. These treats might be toys, fruit, nuts, candy, or even money. But Sinterklaas had a counterpart named Zwarte Piet, or Black Peter. He first appeared in a story in 1850 by schoolteacher Jan Schenkman, but the legend precedes this. Some say this Moorish Spaniard character dressed in Renaissance clothing has its roots as far back as the myth of Odin and his raven helpers Huginn and Muninn. When Odin leads the Wild Hunt, according to the legend, these figures would perch at the chimney and listen in on the mortals below, to report on the good and bad. And so it seems, Black Pete served a parallel role for Sinterklaas. 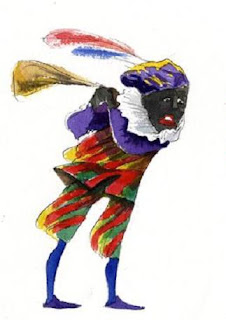 You wouldn't want to merit a visit from Black Pete at Christmastime. That would mean you were one of the bad children, undeserving of gifts. Instead, it is said Black Pete would leave a dirty lump of charcoal from the fireplace. Or a bundle of birch twigs called a "roe", implying you were due for a "Birching." Yikes!

If you thought Black Pete was scary, this figure would surely terrify you into being a good little child. In Germany, the benevolent figure of Saint Nicholas apparently wasn't enough incentive for kinderlings to finish their homework, clean their room, say their prayers and brush their teeth. For sass-talkers, slackers and rebels, the naughty list takes a nightmarish twist with the legend of Krampus. 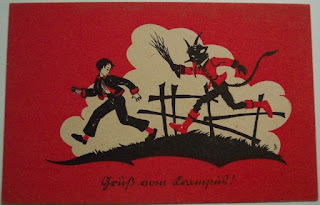 For starters, Krampus was half goat, and half demon. He is the Norse mythology son of Hel. The German word for claw, krampen, describes one of this creature's main attributes. On the night before St. Nicholas Day, Dec 6, or Krampusnacht, a naughty child would be lucky to get a lump of coal in his stocking, or even a whipping with a birch stick. Other versions are more nefarious, and I will leave them from this fun blog post. Shudder!

The pagan legend of Krampus was strictly forbidden by the Catholic Church, but some scholars believe these anti-St. Nicholas figures were created partly to ease the Saint's reputation as the bad guy. Who wants to celebrate a Santa that doles out fear and punishment for Christmas, anyway?


La Befana
In Italy, the Santa Claus figure was actually an old woman who flew on a broomstick. La Befana wouldfly form house to house and sneak down the fireplace to leave either good gifts for nice children or lumps of coal for the bad. Possibly named for the Feast Day Eve on which she visits, La Festa dell'Epifania, she comes the night of January 5. 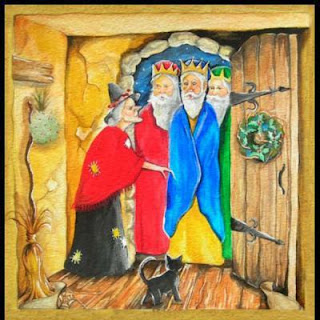 Her legend, though to our modern ears sounding like a Halloween witch, is actually rather sweet. As the story goes, when the Magi left to follow the star to see the King who had been born, many set out to meet them to offer gifts to the baby. Befana was too busy with housework, and stayed behind sweeping. But the next day, after realizing she missed the Three Wise Men, she tried to hurry to catch up so she might give her gifts. She never did catch up to the Magi, so Befana spends every year circling with her broom and distributing her gifts to good children since she couldn't give them to the Christ child. But to the naughty boys and girls she brings cinders, onions and garlic. Blech! I'd rather have chocolate.

These legends were interesting to me as I researched a bit about them. I'm really glad we no longer scare our children with witches, goblins and ghosts at Christmastime. The real story of Jesus, who was born to save us from our sins, is so much more uplifting. I know I haven't always been a perfect angel, either as a child or as an adult. So I'm doubly grateful for the grace and hope that Jesus' birth brings. 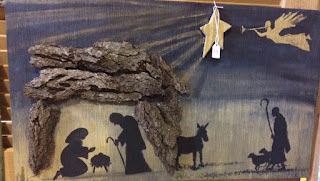 With His true story in mind, I wish you all a 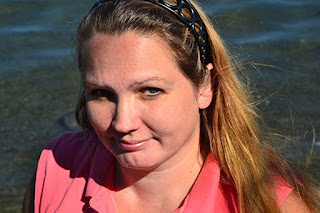 Kathleen L. Maher has had an infatuation with books and fictional heroes ever since her preschool crush, Peter Rabbit. She is one of nine authors in Barbour's 2018 Victorian Christmas Brides Collection, and her story features her hometown of Elmira, New York. Her debut historical, Bachelor Buttons, blends her Irish heritage and love of the American Civil War. She won the 2012 ACFW Genesis contest for her Civil War story, released this summer under a new title The Abolitionist’s Daughter. Kathleen shares an old farmhouse in upstate New York with her husband, children, and a small zoo of rescued animals.