A BIT OF AMISH HISTORY

Historical Amish people didn’t dress or behave that differently from a lot of other farmers in the 1800s. 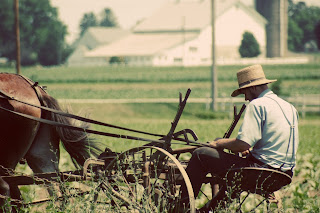 However, they did strongly adhere to religious beliefs like a lot of other religious groups did and still do, but there weren’t as many technological advances for them to abstain from to highlight their differences. Until the mid 20th century, children of the Amish attended public schools with the other non-Amish children. Some still do.

A lot of people think of the Amish as an ethnic people group like Australian, French, or Greek, but Amish is a religion like Baptist, Methodist, or Catholic. Just because a child is born into a home with Christian parents doesn’t make the child a Christian. Same with Amish. There are no Amish children, per se, but rather, children of Amish. When a young person decides to become a church member, that is when they become Amish.
So where did the Amish people and religion come from?

THE OLD COUNTRY
The Amish religion started as a split (or schism) in the Mennonite movement which stemmed from the Anabaptist reform movement in Europe. Anabaptist was a new belief held by a radical Protestant sect that believed baptism should only occur for believing adults after they have made a decision to follow Christ Jesus.
The Mennonite movement was a reform movement with origins in the Anabaptist movement based on teachings by Menno Simons (1496-1561). Within the Mennonites, Jacob Ammann’s (1644-1730) teachings became the basis for the Amish movement that took a version of his name. The word Amish was first used as a term of disgrace in 1710. 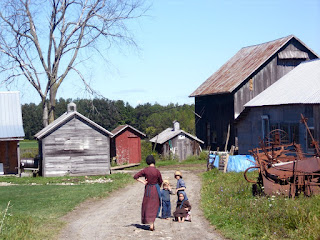 THE NEW COUNTRY
Amish began emigrating to North America early in the 18th century. Like many other people, some of the Amish came for religious freedom, first to Pennsylvania, then spreading to other states like Ohio, Indiana, Michigan, and others.
As the Amish communities grew, they split to better accommodate the members. Some groups split due to religious differences. They disagreed over whether to permit things like social change and technological innovations into their communities.
Most if not all of the Amish groups left in Europe assimilated into Mennonite communities. 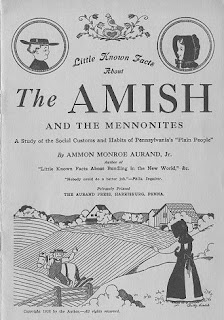 As there are now, back in the 1800s, there were different types of Amish groups.
~Old Order Amish, the most conservative subgroups belong to this group, then and now.
~New Order Amish, less conservative and include some Amish Mennonites.
~Mennonite, most progressive.
Most of the difference seem to be around which technology innovations are permissible to use, from indoor plumbing to electricity and machinery. The mainstays of the Amish way of life have long since been humility, family, community, and separation from the world. 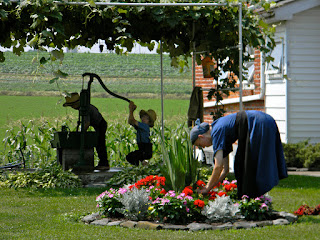 Each district (or community) has its own set of rules to follow. These rules are called the Ordnung. The Ordnung is why an Amish person in one area might have had a pump inside the house and another didn’t or whether to allow its people to make clothes with printed fabrics. In modern times, it would be the difference from pulling a plow with a horse while another might be using a tractor, or one Amish person riding a bicycle, while another uses a scooter.

Though Amish determine to be separate from the world and not depend on it for living, they aren’t as removed and independent as they would like, for they sell their crops and homemade goods to the outside world. I believe in this day and age with technology running the world and farmland more and more scarce, Amish are finding it harder and harder to remain apart.

Mother-to-Be’s Amish Homecoming... Pregnant and alone, Dori Bontrager is sure her Amish kin won’t welcome her—or the child she’s carrying—into the community. And she’s determined that her return won’t be permanent. As soon as she finds work, she’ll leave again. But with her childhood friend Eli Hochstetler insisting she and her baby belong here, will Dori’s path lead back to the Englisher world…or into Eli’s arms?
(Book 3 in the Prodigal Daughter's contemporary series)

MARY DAVIS is a bestselling, award-winning novelist of over two dozen titles in both historical and contemporary themes. She has five titles releasing in 2018; "Holly &amp; Ivy" in A Bouquet of Brides Collection in January, Courting Her Amish Heart in March, The Widow’s Plight in July, Courting Her Secret Heart September, &amp; “Zola’s Cross-Country Adventure” in MISSAdventure Brides Collection in December. Coming in January 2019, Courting Her Prodigal Heart. She is a member of ACFW and active in critique groups.