a footnote from history by stephanie grace whitson (www.stephaniewhitson.com) 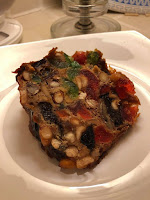 I decided to make a fruit cake.
I know not why.
It seemed a good idea at the time.
I gathered up the recipe, ingredients and such,
And borrowed just the kind of pan
In which to bake the beast.
Reviews were varied when I shared the culinary plan.
And now I'm blogging all about it ....
With a bad attempt at a poem. 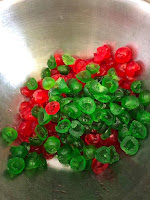 Do you like fruitcake or hate it? There doesn't seem to be a middle-of-the-road response to this ancient confection. I discovered some interesting things in my adventure which began with the beautiful candied fruit at left and ended with a cake that weighed four pounds.

Fruitcake is ancient. The earliest known recipe is from ancient Rome and calls for pomegranate seeds, pine nuts, raisins, and barley mash.

Fruitcake in the Middle Ages contained honey, spices, and preserved fruit (dried fruits began to arrive in Britain in the 13th century). A luxury reserved for special occasions, fruitcake was prepared long before it was to be served, and alcohol provided both flavor and preservation.

Making a fruitcake in the 18th century was labor intensive. Fruit had to be washed, de-pitted, and dried. Sugar was cut from a loaf and had to be pounded and sieved. Butter ... well. They started with a cow, right? Milk, churn, wash--one source I read mentioned washing butter in rosewater, the latter which I assume began with roses. Eggs had to be beaten by hand, and some instructions recommended beating for half an hour. It makes my arms hurt just thinking about it. And then, once the concoction was assembled, one had the issue of managing the temperature in wood-fired ovens.

Compared to baking in "the good old days," my quest to make the perfect fruitcake was easy (albeit expensive). It was also a failure. We eventually ate it, but we didn't love it.

Housekeeping in Old Virginia, published in 1879, includes two recipes for "White Fruit Cake," one of them with the note (superior, tried recipe) and seven other recipes for Fruit Cake. Here's one:

1 quart sifted flour.
1 pound fresh butter, but up in 1 pound powdered sugar
12 eggs
3 pounds bloom raisins
1 1/2 pound of Zante currants
3/4 pound of sliced citron
1 tablespoonful each of mace and cinnamon
2 nutmegs
1 large windeglassful Madeira wine
1 large windglassful French brandy mixed with the spices.
Beat the butter and sugar together--eggs separately. Flour the fruits well, and add the flour and other ingredients, putting the fruit in last. Bake in a straight side mold, as it turns out easier. One pound of blanched almonds will improve this recipe. Bake until thoroughly done, then ice while warm. 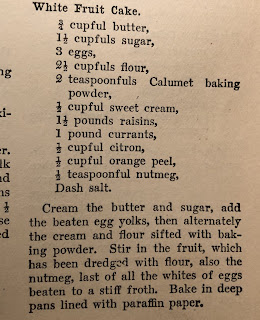 And here (at left) is a recipe for White Fruit Cake from Household Discoveries and Mrs. Curtis's Cook Book first published in 1908.

How about you? Have you ever made fruit cake? To you have a favorite recipe? Here in Nebraska, we have a company in Beatrice that still follows a 1917 recipe introduced in St. Louis by immigrants from Germany.
One millions pounds of fruitcake go out across the country from Beatrice, Nebraska, every holiday. http://www.nebraskalife.com/Going-Nuts-for-Fruitcake-in-Beatrice/.

How did your holiday baking go? Is there something that's labor intensive and/or expensive that's part of your holiday tradition?

In Messenger by Moonlight, Annie Paxton is confident 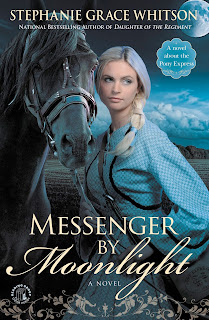 she can handle being the only cook at a remote Pony Express station and stage stop in Nebraska Territory. She's in for a surprise!

I'd love to have you join the conversation about history and writing and quilts ... with the occasional comment about my perfect grandchildren LOL ... here: www.Facebook.com/stephaniegracewhitsonofficial/

Email ThisBlogThis!Share to TwitterShare to FacebookShare to Pinterest
Labels: Fruitcake