So much of the Bible owes to Hebrew tradition and writings that it seems odd that Christians and Jews have not had the most celebrated history together of playing nice in the faith playground. Antisemitism and persecution have soured what should have been a brotherhood of many shared beliefs. One does not have to revisit the inquisition to recall man's inhumanity to man in the name of religion.

But there has also been some inspiring moments in history when Jews and Christians have found common ground united on shared faith, and this post will highlight a few of them specifically in the 19th Century.

The London Society for promoting Christianity Amongst the Jews was an effort of the Anglican Church in the early 19th Century to share Jesus as the Messiah to Jewish people groups through friendly outreach. One of the ways the society, founded in 1809, built inroads to bridge the faiths was through translating the New Testament into Hebrew. Reverend Fry, a Jewish man who converted, established a Jewish Chapel where he would preach to his brothers. Reverend Fry also started a school where young Jewish boys could attend for free prior to the age of apprenticeship. And for Jews who accepted Jesus as Messiah who were shunned and outcast from their people, Reverend Fry established a print shop where they would find employment and fellowship with one another. Adults were taught English. A cotton factory also offered employment to indigent, outcast converts. A library of Hebrew and Jewish works was assembled. Apologists for the Christian faith were encouraged to show how The Old Testament reveals Jesus as Messiah and teach Christians the Hebrew roots of Christianity.

This publication went out from the society to New England, and a short excerpt describes their mission statement in a nutshell.

“For if the casting away of them be the reconciling of the world, what shall the receiving of them be, but life from the dead.”—

"...The London Society is founded on a principle, in which the Established Church and Christians of various denominations of Dissenters can cordially unite. It is their plan to limit themselves to the simple object of convincing their Jewish brethren, that Jesus is the Messiah, the Saviour of the world; leaving them, when thus instructed, to search the scriptures, and judge for themselves..."

In the Jews Chapel, Benei Abraham (The Children of Abraham) which was a group of 50 or so converted Hebrews, would meet. Gentile Christians would pray alongside them for the House of Israel, and to minister to those too long persecuted by misguided religious zeal.
In the words of Rev J. W. Cunningham, Vicar of Harrow, who gave notable sermons for the London society, “We have much lost time to redeem,—many past injuries to cancel,—many and countless obligations to this afflicted people to repay."

Other prominent members of the London Society included William Wilberforce, renowned for his work to end slavery and the slave trade in England, and Dr. Albert Gerstmann and Melville Bergheim who established a medical mission in Jerusalem in 1836. One of the many admirable goals of the society was to fulfill prophecy by helping the Jewish people to return to Eretz Israel, their promised land. Christ Church, Jerusalem completed in 1849, the oldest Protestant Church in the Holy Land, is partly due to the work of the society.

Later in the century, the first Hebrew Christian fellowship in America was heralded by The New York Times. October 12, 1885:


ONLY ONE IN AMERICA


AN EPOCH IN THE HISTORY OF RELIGION IN THIS COUNTRY—HOW THE CHURCH CAME INTO EXISTENCE.

"On the northerly side of St. Mark's-place, a few doors from Third-avenue, is a three-story and basement brick structure. Across the front of the building, above the line of the first story windows, extends a black board sign, on which. beneath certain Hebraic characters, are the words: “Hebrew-Christian Church.” The surmounting inscription translated reads: “For my house shall be called a house of prayer for all nations....”

The congregation had its start even before the official church building dedication years earlier in Manhattan's lower East Side under Rev. Jacob Freshman, the son of a Hebrew rabbi converted to Christianity, Rev. Charles Freshman. Services at the St. Mark's-place church were offered in different languages at different times of the day or week, with ministers from various denominations.

Other societies and fellowships included:

In my novella "Something Old, Something New" set to release October 2019 in Barbour's upcoming Lessons on Love collection, My heroine Gilda Jacobs is a young Jewish schoolteacher who must partner with a Christian educator to meet the specifications of the school council for Biblical instruction. My hero Joshua Blake is a revivalist with a calling to reconcile a diverse population to Christ. He finds himself in a crossfire when Dutch Reform New York religion clashes with Hebrew tradition and modern evangelism.

With my family background of Irish settlers from the mid 19th Century who came to New York City and the downstate region, I have enjoyed exploring some of the early subcultures in one of the most historically diverse places on the planet. The first Jews to arrive in the United states came to what would become New York City in 1654. They were fleeing the Spanish Inquisition, and arrived in New Amsterdam to begin a new life. By 1840 when my story is set in Westchester County, NY, there were 15,000 Jewish people in the united States.

Rabbi Leopold Cohn established a ministry in Brooklyn, in the Brownsville section, to Jews in the late 1800's. A convert to Christianity, his outreach focused on the influx of immigrants in the latter part of the century, with schooling and various services as they settled in the New World to escape the pogroms throughout Europe. His ministry was called The Brownsville Mission to the Jews, officially established in 1894, and later renamed American Board of Missions to the Jews, which was the largest outreach in the America to Jewish believers in the 1930's and 1940's. The name would change again in 1984 to Chosen People Ministries.

Kathleen L. Maher has had an infatuation with books and fictional heroes ever since her preschool crush, Peter Rabbit. Her published works include "Love Brick by Brick," a historical romance in BARBOUR's 2018 Victorian Christmas Brides novella collection, featuring her hometown of Elmira, New York. The Abolitionist's Daughter, Book 1 in Sons of the Shenandoah Series released August 2018, won the 2012 ACFW Genesis Award historical category. Book 2 in Sons of the Shenandoah Series releases March 2019, and "Something Old, Something New" releases in Barbour's Lessons on Love collection in Fall 2019. 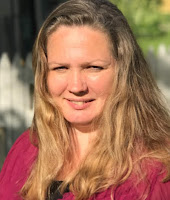 Kathleen shares an old farmhouse in upstate New York with her husband, children, and a small zoo of rescued animals.
Follow Kathleen
on Facebook: https://www.facebook.com/KLMaherAuthor/
on Twitter: https://twitter.com/Mahereenie
and on Amazon: https://www.amazon.com/author/kathleenlmaher