Rebecca Protten: A Zeal for Taking the Gospel to Slaves

Rebecca Freundlich Protten, a woman of African and European descent, was born in 1718 on the island of Antigua. It is suspected that she was kidnapped and sold into slavery on the Caribbean island of St. Thomas. She learned of Christianity from her Dutch Reformed master. She was freed at age 12 by his family after he died.

Once freed, Rebecca’s heart’s desire was to share the grace and salvation of Jesus Christ, especially with the enslaved peoples of St. Thomas. She traveled the dusty roads and up and down hilly terrain in the humidity to reach the slaves in the evenings when they returned from the fields. She also reached out to the women who were abused by their masters.

She worked with Moravian missionaries who taught the equality of men and women in the ministry. She also preached at meetings at a church called “The Path,” where enslaved Africans would come to hear her preach, often against the wishes of their masters who feared a revolt. Yet this didn’t keep them from coming to hear her preach and hear of freedom from sin through God’s amazing grace. Rebecca, herself, went through persecution from local church authorities who questioned her teaching the slaves.

When she was eighteen, Rebecca sought out the German Moravian missionary, Freidrich Martin, who’d arrived on St. Thomas for a deeper education of her faith. Martin was impressed by her skill in teaching. He later said there was “nothing in her other than a love of God and his servants.”

Around the age of 24 in 1742, she traveled to Germany with Martin and her first husband, Matthaus Freundlich. They brought their two-year-old daughter, Anna, with them. Matthaus died on the trip to Germany where he was returning due to his ill health, especially under the persecution they encountered as they spread the Gospel to the slave community on St. Thomas. Shortly after Rebecca arrived in Herrnhut, Freidrich Martin had to return to the mission on St.Thomas. In 1744, Rebecca’s daughter died and she was essentially left alone but was taken to a Moravian commune there.

In Herrnhut, she met her second husband, Jacob Protten, a biracial educator who was also a part of the Moravian church. They married in 1746. Rebecca gave birth to another daughter, whom she also named Anna. Sadly, the child died in infancy.

With the church’s blessing, in 1756, they traveled to the Gold Coast in the country of Ghana where they opened a school for biracial children.

Though Rebecca had no surviving children, she taught the children of others at the school for seventeen years. She became a widow for the second time in 1769 and remained in Ghana for the rest of her life until she passed away in 1780 at the age of 62. Near the end of her life, the Moravian missionaries had desired her return to St. Thomas, but she wasn’t well enough to make the trip.


Rebecca ran her course well with zeal for the Gospel. She did not walk the easy road and left a lasting legacy behind. She’d sown the seeds of Afro-Protestantism in the Americas that began in the West Indies and still reverberates throughout the African-American Christian community today. Perhaps this is why she is hailed as the “mother of modern missions.”

More than fists fly after a fight between Philip and Zeke. When their widowed parents, Maggie Galloway and Thomas Harper meet, they begin a prickly acquaintance. 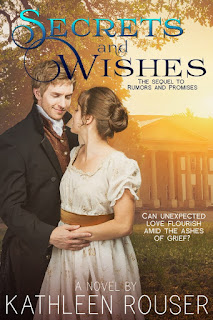 Independent Maggie has placed in a national baking contest and wants to open a bakery to provide a future for her and Philip. Grieving and disorganized Thomas seeks to bring up his unruly brood in Stone Creek, and grow his pharmacy business in peace.

After he becomes gravely ill, Maggie is enlisted to nurse him back to health, and takes his children in hand. She eventually helps Thomas organize his shop. As friendship blossoms so does mutual affection. They team up to defeat a charlatan whose dangerous elixir brings tragedy to Stone Creek.

Humiliating circumstances force Maggie to consider leaving town. Thomas wants to offer her an alternative, but is he too late to declare his love to the angel of mercy who has captured his heart?