The History of Archery

Robin Hood, Brave, Avengers, The Hunger Games, and Confederate Civil War veterans all have one thing in common...

I enjoyed reading about how bows and arrows have been used from the beginning of time, all across the globe, for hunting and military maneuvers. Hunters and warriors from the Stone Age, through the Bronze Age, Iron Age, and into the Middle Ages relied heavily on the sport of archery for survival. One interesting tidbit according to one article was that historically bows were used as weapons on all continents except . I haven’t been able to confirm that notation from other sources though. But it is still interesting, and begs the question of why.

The advent of firearms changed history. Regardless of the fact that early firearms were undependable, and susceptible to wet weather, firearms became the first choice for survival. Despite the drawbacks (pardon the pun) early firearms were more accurate, could penetrate armor more effectively, and were superior for shooting at a target from concealment, so the preference was understandable.

Some far flung regions still use bows and arrows for hunting and defense. A remote group in , recently photographed from the air, aimed bows at the airplane as it flew overhead. Bows and arrows saw considerable use in the 2007-2008 Kenyan crisis. But generally, archery is a sport these days and not a matter of survival.

With archery harking back to the beginning of time, I won't attempt to give a blow by blow description of its uses in every century, so today’s post will offer an interesting snapshot of archery today as well as an interesting incident that happened after the American Civil War.

In some cases, Ex-Confederate soldiers were not allowed to own guns after the war, so naturally the men turned to other modes of survival such as trapping, fishing, and archery to provide food for their families.

Two Confederate veterans, brothers Maurice and Will Thompson, honed their skills as archers in the wilds of the Okefenokee Swamp in . Thomas Williams, a former slave who lived near the Thompsons, had knowledge of English-style archery (the longbow) and helped the brothers become proficient with the weapon.

Later, Maurice Thompson wrote a book, The Witchery of Archery, and people once again became enthused with the sport of archery. In 1879 the National Archery Association was formed, and Maurice Thompson became its first president.

Public interest in archery soon subsided, until 1911 when Ishi, the last of the Yahi Indian tribe came out of hiding in . Ishi died in 1916, but not before he willingly passed on many aspects of his culture, including how to hunt using a bow and arrow, to Dr. Saxton Pope of the of at .

Soon, Dr. Pope was joined by archery-enthusiast Arthur Young and the two men hunted in and and took several large game animals. In the 1920s, engineers (as opposed to craft experts) took an interest in archery and this led to new and improved bows such as the recurve and compound bows that dominate modern Western archery today.

It’s interesting to note that the prowess of Katniss in the Hunger Games, and box-office hits such as Brave, Robin Hood starring Russell Crowe (to name one of many Robin Hood adventures), and Avengers has resulted in a resurgence of interest in traditional and modern archery.

In an article dated August 2, 2012, the Miami Herald states, “USA Archery said membership is up 20 percent from last year, and the organization sent a letter to The Hunger Games author Suzanne Collins, thanking her for making archery cool with the younger generation.” Miami Herald, Archery Gaining Popularity, August 02, 2012.

When I was a kid, we made our own bows and arrows out of whatever came to hand (yes, I was a tomboy). I honestly can’t remember if I hit anything with the ones I made, but I do remember stringing bows and sharpening sticks, and practicing my skills for many, many hours. And I’ve shot my sons’ compound bows. At least the ones they had when they were first learning archery. I’m not strong enough for the big guys! It’s a good feeling to hit the target, and makes me want to try harder next time.

So, what’s your experience with archery? Have you ever shot a bow? Do you have family members who enjoy the sport? If not, surely you watched Robin Hood: The Prince of Thieves starring Kevin Costner, or more recently, one of the movies mentioned above?


In anticipation of the release of
The Crossing at Cypress Creek, book #3
in my Natchez Trace Novel series, the first two ebooks are on sale during the month of April! 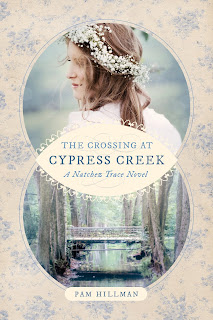 Read an excerpt from The Crossing at Cypress Creek