After the attack on Pearl Harbor, December 7, 1941, fear consumed much of the United States population. Their fear turned to animosity against all Japanese, even the Nisei, native born Japanese who were American citizens. In February 1942, President Franklin D. Roosevelt, signed an executive order to send all Japanese residing in the United States to internment camps.

Many of the young Nisei wanted to fight for their country in the war. In 1942, the U.S. government decided to remove all soldiers of Japanese ancestry from the armed forces. In Hawaii, the dismissed members of the U.S. Army petitioned the government to be allowed to fight for the United States. Their petition was approved and they were brought to the mainland for training.

This group of young men were so impressive, the government reversed their decision and in February of 1943 they allowed a battalion to be formed made up of Japanese Americans. Questionnaires were sent to the internment camps to determine the men’s loyalty. Some of the questions were so offensive they were left blank. The suggestion that offended most was that these young men had a prior loyalty to the Japanese emperor when the United States was their native country. Their parents had chosen to come to the United States and they had been born here.

The government asked for volunteers from both the mainland and from Hawaii. 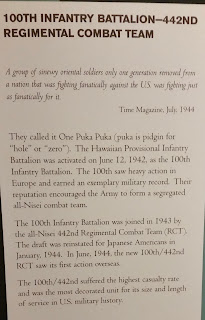 The response from Hawaii was overwhelming. Three thousand volunteers came from Hawaii and the rest from the mainland. These men made up the 100thBattalion and the 442ndInfantry Regimental Combat Team consisted of some men from Hawaii but most of them were from the internment camps in the Continental USA.

After training, the 442ndwent into battle for the first time in June 1944. They fought against overwhelming odds as did all the soldiers in the battle. Later, the Presidential Unit Citation Review said this of the Nisei soldiers of the 100thBattalion, “The fortitude and intrepidity displayed by the officers and men of the 100thInfantry Battalion reflects the finest traditions of the United States Army.”

The 442ndBattalion were also known for their bravery and willingness to face difficult odds. In October 1944 they were tasked with the rescue of a Unit from Texas, the 1stBattalion of the 141stInfantry, called the “Alamo Regiment” because the men hailed from Texas. The Texans were surrounded and had no way out. The 442ndwent to their aid and rescued them. When the battle ended only 17 were left alive in the “Alamo Regiment” and the Nisei paid for a high price in the loss of men for the Texan’s rescue.

The men of the 442nd, who had families in the internment or concentration 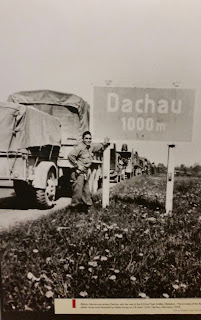 camps in America, were among the first to enter Dachau to liberate the detainees there. The sight of so much horror and misery followed them the rest of their lives.

By the end of WWII, the 442ndwas the most decorated unit for its size in U.S. Military history. They fought for two years in the war and received more than 18.000 awards. Some of those were 9.486 Purple Hearts, 4,000 Bronze Stars and 21 Medals of Honor. President Truman spoke highly of their bravery at home and abroad. In 1951, the Nisei Regiment was the subject of a film titled, Go For Broke, which was the 442nd’s official slogan.

Many of the pictures in my blog today were taken at the Japanese American Museum in Los Angeles. The information gathered there is exceptional. If you ever get the chance to visit, please do so. They have a beautiful memorial monument there with the names of the Nisei soldiers on one side and various quotes on the other side.

Nancy J Farrier is an award-winning author who lives in Southern Arizona in the Sonoran Desert. She loves the Southwest with its interesting historical past. When Nancy isn’t writing, she loves to read, do needlecraft, play with her cats, and spend time with her family. Nancy is represented by Tamela Hancock Murray of The Steve Laube Literary Agency. You can read more about Nancy and her books on her website: nancyjfarrier.com.
Posted by Nancy J Farrier at 1:00 AM