The Hello Girls of World War 1

Years ago when I was in high school I was hired by the local Bell Telephone office to work as a telephone operator during the summers. My grandfather, a life-long employee of Ohio Bell, said to me, “So you’re going to be a hello girl.” I had no idea what he meant and didn’t know until I started researching World War 1 home-front information for the third book in my historical series.

Almost the entire war was fought in trenches dug out of France’s farmland. It was a nasty muddy and dirty war. The telephone had already made its appearance in the U.S. and homes were being connected to the people in their communities as well as across the country through telephone operators. When the troops experienced difficulties communicating with other troops fighting a distance away, they decided to use telephone cable that was connected to a central switchboard quite a distance back from the front line. Almost on a daily basis, soldiers would have to roll up the cable that was laid to their current position and take it to the next position and roll it out again. To connect one company with another in order to develop plans of attack, they would use the field telephone and call the central operator and the operator would then connect them with the other officers. All done on switchboards exactly like those used at home. At first, they tried hiring French operators which didn't work well because the French operators had no English language skills. Then they trained soldiers to man the switchboards, but the men were not as agile as the women in connecting calls swiftly and correctly.

In late 1917, General Pershing sent out an emergency appeal for experienced U.S. telephone operators who were bilingual in French and English to apply for the positions. After strident language tests and skill testing the 700 applicants were narrowed down to 300. In March of 1918, Chief Operator, Grace Banker, led the first group of women in their journey overseas first to England and then across the channel to France where a bank of switchboards awaited them in Chaumont, France, and other locations around France.
Although the telephone operators were issued Army uniforms and were considered to be part of the Signal Corp, after the war ended and the operators applied for veteran’s status they were denied. The Army decided to consider them “contract workers.” Over the years the women petitioned U.S. presidents and their congressional representatives, asking to be seen as war veterans. In 1977, they were finally recognized, but many of the ‘hello girls’ had died by that time. Those that were still living were able to start receiving the benefits they should have received from the beginning.

In 2018, a documentary was released that tells the story of the Hello Girls. It was shown at the women's memorial at Arlington National Cemetery in March 2018, nearly 100 years after the first ship carrying the operators overseas left the U.S. You can view this film by going to this link: https://www.military.com/off-duty/2018/02/12/hello-girls-documentary-celebrates-wwi-female-telephone-operators.html

You can also read more about the Hello Girls of World War 1 through a non-fiction book called The Hello Girls by Elizabeth Cobbs. I also enjoyed the novel, Girls on the Line by Aimie K. Runyan.

Pamela has written most of her life, beginning with her first diary at age eight. Her novels include Surprised by Love in Lake Geneva, Wisconsin and Second Chance Love. Safe Refuge and Shelter Bay, Books 1 & 2 in her Newport of the West series, are set in her hometown of Lake Geneva, Wisconsin. She lives in northeastern Illinois with her two rescue cats. 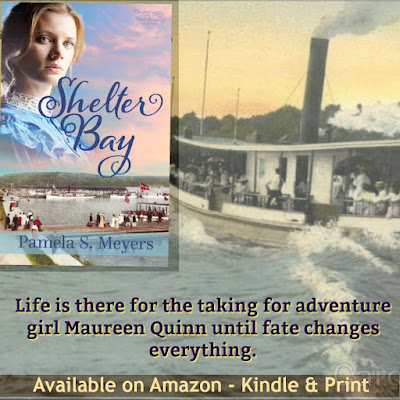