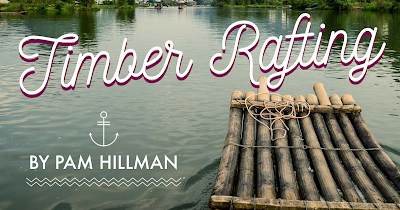 Have you ever heard of timber rafting? It is fascinating! I knew from the first time I stumbled on this type of transporting logs that I wanted to use it somehow in my writing.

Unlike driving loose logs down a river, timber rafting consists of tying the logs together in massive raft-like structures and floating them down wide, quiet rivers like the Mississippi. There is evidence of this practice dating back to the sixteenth century and up into the 20th century, possibly even today.

How does timber rafting work? Think of the way boxcars are coupled together to form a train. This is kind of like the long, snaking timber sections coupled together to keep the whole shebang traveling together, but allowing each section to break with the bends in the river. Each section was linked together with flexible coupling poles so the raft could maneuver around bends. Sometimes hardwood or sycamore was used at intervals to make the raft more buoyant. 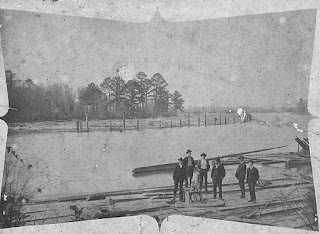 The size of timber rafts depended on the width and swiftness of the river to be navigated, how serpentine the river was and how many men the logging operation had to work the raft.

According to one Wikipedia article, “Timber rafts could be of enormous proportions, sometimes up to 600 metres (2000 ft) long, 50 meters (165 ft) wide, and stacked 2 metres (6.5 ft) high.” It could take up to 500 men to drive such a huge raft. And since these raftsmen were living on the raft and the river for weeks at a time, they build cabins and galleys on top of the rafts.

Raftsmen had their own lingo and terminology for the tools they used. “Chain dogs” or “raft shackles” were two iron spikes on either end of a short chain to hold the poles in place. “Steering oars” and “steering sweeps” were used more like rudders to guide the timber raft down the river and to keep it from running aground more than they were used to paddle.


The “sweep man” was at the mercy of the raft’s speed in the current. Massive sweeps were mounted at the front of the raft on a special bolster. It had a hole in it to accommodate a large peg that was the pivot for the sweep. Think of the rudder on the back of a boat, but instead mounted not the front and much larger. The sheer weight of such a beast would have made controlling it almost impossible. But the raftsmen did have a few tricks up their sleeves. “Pike poles” or “jampikes” were used by men stationed at points along the rafts to keep it shoved off rocks, sandbars, and snags. “Snub poles” were often made of hickory and used near the rear to slow the raft down. Depending on the depth of the water, longer poles were inserted between the logs to drag the river bottom and slow the raft down.

There were ways to tie off on shore on slower moving rivers, but it was risky and the crew had to work together to accomplish such a feat. Long ropes were kept at the ready and men had to either swim for shore and tie up to trees along the way.  Each section of the raft would need to be secured at exactly the right time or it could be disastrous for the crew.

Check out this video from an almost a century old German documentary 16mm silent film. This may be the Hozu river near Kyoto.

In my research, I developed a healthy respect for the tough men who became raftsmen on these larger than life timber rafts. Just from watching the videos, it’s obvious they had to be quite skilled at their jobs.

Timber rafting makes an appearance in The Crossing at Cypress Creek, the third installment in Pam Hillman's Natchez Trace Novel series, the O’Shea brothers cut a path through the wilderness between the lawless Natchez Trace and the Mississippi River. Their plan is to drive logs down the river to feed the booming construction in the city of Natchez.
Posted by Pam Hillman at 12:00 AM