Add Spice to Your Life

I have always loved to cook. My grandmother taught me to make cookies when I was only five years old. I believe that’s what led me to major in Home Economics in college. I taught homemaking in high school for eighteen years before moving on to teach college level English. Because of those early cooking days, I’ve always been interested in cooking with herbs and spices. They have been around as long as history has been recorded. We can trace them back to Biblical days and the spice routes that made up much of the trade in those days. Those early spices were highly prized and costly. Remember Joseph’s brother sold him into slavery to spice traders on their way to Egypt.

Included among those early spices were black pepper, cumin, cinnamon, ginger, cloves and nutmeg to name a few.

The spice trade picked up in Europe during the years of the Crusades which made them even more popular than ever. Since those early days, the spice trade grew and the East India Company formed by the Dutch in 1600 became one of the most powerful trading companies in history.

People often lump herbs and spices into the same barrel, but they are entirely different. Herbs are fresh or dried leaves of plants, usually green in color. They are grown in temperate climates all over the world. We have herb gardens in our yards or smaller ones in our kitchens. Fresh herbs are also available in our grocery stores or supermarkets today.

Spices are the flower, fruit, or seeds of a plant. They may also be the bark or root of tropical plants. Spices come in a variety of colors from black and brown to orange, red, and yellow. Some plants have been known to produce both herbs and spices. One such plant is Coriandrum sativum. The leaves may be dried to make the herb cilantro or the spice coriander. One of the best attributes of spices and herbs is that they add very few calories to our good. Other good things include having substantial antioxidant qualities because of flavonoids. Cumin and ginger are two of highest in antioxidant activity.
Here is an array of the colorful spices and herbs available today

Many countries adopted certain spices and herbs to liven up their cuisine. Chinese, Indian, Mexican, Italian and Greek all have spices and herbs especially identified with dishes. Many cooks stick to the same old favorites and rarely experiment with different ones to liven up our recipes, but others of us enjoy mixing and matching and coming up with new flavor combinations for our foods.

Although not as popular today, many early medical remedies included special herbs put together for their healing powers.

The list of herbs and spices is long and colorful. This month I’m listing the most popular spices. Next month I’ll post more about herbs and their uses.

Cayenne Pepper is a strong, spicy product made from tropical chilies. In its powder form, it is used in a number of ethnic cuisines such as Mexican, Indian, Southeast Asia, Chinese and African. It comes in around 200 varieties and is known to add a little heat to your dish.
Cinnamon comes from the dried bark of several different types of laurel tree and was one of the most sought after spices in early history.
Cloves are native to the Molucca islands in Indonesia and are the fruit of the clove tree. Pungent in both taste and smell, most of us have enjoyed cloves with our baked hams or in Wassail at Christmas.
Garlic can be traced back to over 5,000 years ago. The pods are made of up cloves which can be minced from the fresh pod, dried into a powder, mixed with salt, or minced and preserved in liquid. It has also been used as a way to ward off evil spirits and to cure ailments.
Ginger was first cultivated by the Chinese and Indians, but its true source is unknown. It is a root fairly common today in both the solid form and dried powder. It is the prime spice in our favorite gingerbread concoctions.

Mace and Nutmeg come from the same fruit growing on an evergreen tree in Indonesia. Nutmeg comes from the inner brown seed while mace is the deep red outer membrane. Nutmeg has a warm, spicy and sweet flavor. It can be used in sweet dishes like spiced baked goods, custards, eggnog and on fruits. It can also be paired with vegetables for savory dishes.


Paprika originated from Central America where the peppers grew wild. The spice was introduced in Spain in the 1600’s. The peppers are ground into a powder that varies in flavor from mild to mildly spicy to spicy and is most often seen as a garnish on such foods as deviled eggs and potato salad.
Star Anise is the fruit of a small Oriental tree native to China and Viet Nam. The boat-shaped pods give the fruit a start shape. It has a strong licorice flavor like regular anise, but star anise is bitter. It's a rather pretty fruit.

Tumeric is the root from a plant in the ginger family and has been used as a medicine, flavoring and dye for centuries. It is primarily grown in India, China and Indonesia. It’s an essential component of curry powder.
Saffron is a rare spice coming from the stigma of a flowering plant in the crocus family. To make one pound of saffron, pickers must collect as many 225,000 stigma. It has a pungent, bitter flavor and is orange in color. Today it can be purchased online.

Cuisine from India is known for its use of curry powder in its native dishes. This spice is a blend of a number of spices such as coriander, turmeric, fenugreek, and chili peppers in its blends.

For more about curry and making your own blend, visit
https://www.spicesinc.com/p-3832-all-about-curry-powders.aspx

Here is a picture from my own cabinet with a few of my favorite spices. 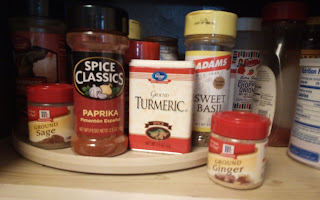 Because we didn't have enough entries last month, I'm extending my give-away to this this month. Leave a comment and tell me about your favorite spices and be entered. Be sure to leave your email address as well. If you entered last month, you may enter again for an extra chance.

Lasso Around Her Heart: Allie Logan promised her mother to take care of the family after her death, and she’s kept that promise for over five years, but now Jarrod Wright comes into her life and threatens that promise. When she learns her of her father’s attempts to arrange a marriage between her and Jarrod by offering him land, she shuts herself off from Jarrod only to find he’s already lassoed her heart. But how can she forgive her father for offering to pay a man to marry her and Jarrod for accepting the offer?

Martha Rogers is a multi-published author and writes a weekly devotional for ACFW. Martha and her husband Rex live in

Houston, Texas where they are active members of First Baptist Church. They are the parents of three sons and grandparents to eleven grandchildren and great-grandparents of five. Martha is a retired teacher with twenty-eight years teaching Home Economics and English at the secondary level and eight years at the college level supervising student teachers and teaching freshman English. She is the Director of the Texas Christian Writers Conference held in Houston in August each year, a member of ACFW, ACFW WOTS chapter in Houston, and a member of the writers’ group, Inspirational Writers Alive.