Sarah Morgan Dawson, A Southern Girl and Her Diary

As a history buff and historical writer, I love to find personal accounts written by someone who lived in the past. Such was the case when I discovered the diary of Sarah Morgan on a trip back to my hometown of Baton Rouge, Louisiana.
Sarah Morgan was born in New Orleans in 1842. When she was eight years old, her father, a prominent judge, moved to Baton Rouge, the Louisiana state capital.

Although Sarah had less than a year of formal school, her mother taught her well. Sarah learned to master the French language as well as English. She also read widely, familiarizing herself with the classics of the time.

Sarah had seven siblings – five brothers and two sisters. In 1861, when Sarah was nineteen,  her ‘favorite’ brother Henry was killed in a duel. Only months later, her father also died. Three of her brothers joined the Confederacy – two in the army and one in the navy. However, her oldest brother, a judge in New Orleans, swore allegiance to the Union and was able to keep his position during the war.

Left at home were Sarah’s mother, her sister Miriam and her married sister Eliza (Lilly) with her five children. In 1862, the Union took control of Louisiana, and Federal troops invaded Baton Rouge, using the Baton Rouge state capitol building as a prison, then a garrison.

Sarah wrote in her diary of the desecration of the beautiful capitol building known as the “gray castle.” Sarah’s mother did her best to take care of the family, moving them back and forth between their small country home thirty miles away in Clinton, Louisiana, and Baton Rouge, as they tried to find a safe place.

In her journal, Sarah wrote that most of the Union officers were polite gentlemen, and she scorned her fellow citizens who treated them with disdain and disrespect. However, once their home was ransacked by Union soldiers, the family was forced to leave Baton Rouge for good and move in with Sarah’s sister-in-law whose home, the Carter plantation, was in Linwood, Louisiana.

Sarah documented the hardships of refugee life, such as the scarcity of food and household items. At Linwood, she wrote about her isolation caused by the war, and the frequent visits by groups of Confederate soldiers camped at nearby Port Hudson.

Sarah’s visit to Linwood was extended after she was thrown from a horse in November 1862 and spent months incapacitated by a back injury. The federal assault on the Confederate stronghold at Port Hudson in July 1863, however, forced the Morgan women to make a final exodus to occupied New Orleans, where they joined the household of Sarah’s brother Judge Philip Hicky Morgan. While in his home, Sarah received news of the death of her brothers, Gibbes and George, in February 1864.
After the war, Sarah and her mother went to live with Sarah’s youngest brother James in South Carolina. To support herself, Sarah accepted an editorial position at the Charleston News and Courier, and throughout 1873, she wrote a series of editorials on the plight of young, single women in the postwar South.

In 1874, Sarah married the newspaper’s editor, Englishman Francis Warrington Dawson. The couple had three children: Ethel in 1874, Warrington in 1878, and Philip Hicky in 1881. Philip died at six months of age. After her husband’s murder in 1889, Sarah again turned to her pen for survival, publishing a series of short stories and translations of French literary works. In 1899, she moved to Paris with her son Warrington, where she published Les Aventures de Jeannot Lapin, a French version of the Brer Rabbit stories, in 1903. She died in Paris on May 5, 1909 while Warrington was away on an African safari with Theodore Roosevelt.

Though Sarah originally asked that her six-volume diary be destroyed upon her death, her son Warrington convinced her to leave it to him in her will. In 1913, he arranged to have the first four volumes published as A Confederate Girl’s Diary. 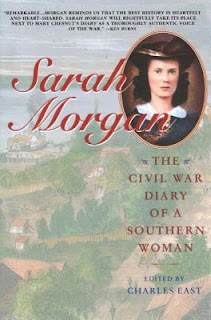 Marilyn Turk’s roots are in the coastal South, raised in Louisiana, moved to Georgia, then retired to Florida. A “literary archaeologist,” she loves to discover stories hidden in history. She is the author of two World War II novels, The Gilded Curse and Shadowed by a Spy, and the four-book Coastal Lights Legacy series set in 1800s Florida—Rebel Light, Revealing Light, Redeeming Light, and Rekindled Light—featuring lighthouse settings. Marilyn’s novella, The Wrong Survivor, is in the Great Lakes Lighthouse Brides collection and Love’s Cookin’ at the Cowboy Café, in the Crinoline Cowboys collection. She also writes for Daily Guideposts Devotions.

She lives with her husband, 10-year-old grandson, and a 17-year-old cat. When not writing, Marilyn can be found playing tennis, gardening, walking, fishing, or kayaking. She and her husband have visited over 100 lighthouses so far, but the RV is ready to travel and go see more.
Marilyn is the director of the Blue Lake Christian Writers Retreat in Alabama, www.bluelakecwr.com.
Website: @http://pathwayheart.com
Email: marilynturkwriter@yahoo.com