This week I was honored to give a presentation at the Geneva Lake Museum on the history of the Riviera, a community building  that sits at the lakefront  in Lake Geneva, Wisconsin. Lake Geneva is my hometown and the setting for three of my published historical novels with more on the way. I had done extensive research on the "Riv," as locals call it, before writing my novel Surprised by Love in Lake Geneva.

To draw tourists to town to enjoy the beautiful lake and town and boost the small town's economy, the city fathers of Lake Geneva decided in January 1932, to sell bonds to finance a new recreation center and ballroom. By March of that year, the first pilings went into the lake bottom to support the new building which does not sit on land but is built out over the water. With lightning speed, the building's Italianate designed exterior was completed by September 1, 1932, and an informal preview of the second-floor ballroom was held. More than 1000 people from all walks of life attended the event, all eager to see what the building looked like inside and to enjoy dancing to the music of Ralph Williams' orchestra.

Although the ballroom was not yet fully complete, it was called by a Lake Geneva News Tribune reporter, "Wisconsin’s most beautiful ballroom." And it seemed most people agreed with him.

Over the years, the Riviera Ballroom hosted many famous entertainers and big bands, including Louie Armstrong who returned on ten consecutive summers during the 1950s. Every weekend, lines of ladies in formals and men in suits and ties formed outside the ballroom entrance. The building wasn’t air-conditioned, but with the windows open and a breeze off the lake, they survived. In addition to the summer entertainment, the local high school used the ballroom for their junior prom for many years. I remember as a child sitting on the grass outside the Riviera and watching the young couples wearing their formals and tuxes arrive for the prom.

During the 1960s rock and roll greats replaced the big bands and jazz singers at the venue, including Stevie Wonder in 1969. But they began to fade in their allure and the ballroom was then reconfigured into a nightclub called The Top Deck. I personally never saw it during that phase as I was living out of state. But I've been told it was a radical change.  Pop music stars like Chubby Checker, Herman’s Hermits, and the Ides of March (to name a few) played there.

By 1980, what had once been dubbed the most beautiful ballroom in Wisconsin was showing its age, and the city took over the lease and restored the space back to its original appearance. It’s since been run by the city and has hosted many weddings/wedding receptions and other events, including high school proms. In 1986, it gained Landmark Status and was placed on the National Register of Historic Places.

When I began researching for my novel, Surprised by Love in Lake Geneva, I used articles from microfilm of the local newspaper at the time the Riviera was constructed. As I read, I became caught up in the excitement of the townspeople over what was taking place at the lakefront. It represented hope during a time when a lot of people were out of work. They knew if they built it, people from Chicago (a two-hour train ride away) would come and enjoy the beautiful lake and beach during the day and dance their feet off at night in the ballroom. Of course, all the while, spending money at restaurants and hotels and keeping the merchants and innkeepers happy. Additionally, the tradesmen who worked on the building while it was under construction saw welcome paychecks that had not been plentiful during that time. It was a new era for the town of Lake Geneva, which is still a popular getaway. I often meet people from far-flung places who tell me they have been to my hometown and what a beautiful place it is.

Have you been to Lake Geneva? Please share if you have. If not, what is a favorite getaway place you enjoy?

Leave a comment as I will be drawing a name to win a copy of Surprised by Love in Lake Geneva, the 1933 novel I wrote that features the Riviera in the story.

Pictures of Riviera: Old postcards, public domain and owned by the author.
Lake Geneva News Tribune, 1932 and 1933 editions
At the Lake Magazine, June 2019; Once a Storied Ballroom …;
Anne Morrissy. 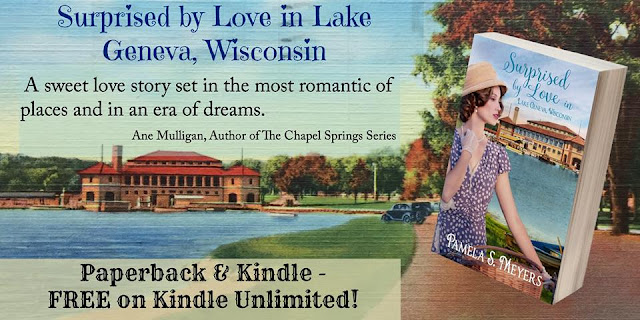 Pamela has written most of her life, beginning with her first diary at age eight. Her novels include Surprised by Love in Lake Geneva, Wisconsin and Second Chance Love. Safe Refuge and Shelter Bay, Books 1 & 2 in her Newport of the West series, are set in her hometown of Lake Geneva, Wisconsin. She lives in northeastern Illinois with her two rescue cats.
Posted by Pamela S. Meyers at 12:30 AM