Refiner’s Fire, Book 6 of my American Patriot Series, is partially set in 18th century France. While writing it, I did some research on French châteaux, among other things. I discovered that word château has a wider meaning than the English word castle; forts, palaces, mansions, and even vineyards can be included in this category. But for my purposes I focused on actual castles and palaces.

For me there’s nothing more picturesque and romantic than a castle. And there’s a seemingly endless supply of these richly historic structures in France since many of Europe’s medieval wars were fought in that country. So in my next few posts, we’re going to take a look at several well-known French castles and palaces. Today we’ll focus on the famous  Cité de Carcassonne.

The lovely hilltop town of Carcassonne is more than just a castle. Known as the Cité de Carcassonne, the citadel is a beautifully preserved medieval town that dates back to the Gallo-Roman period and the finest extant example of a medieval fortress in Europe. It’s a historical gem that was added to the UNESCO list of World Heritage Sites in 1997.

Carcassonne is one of the major towns in the Languedoc region in the south of France, located 80 kilometers east of Toulouse in the plain of the river Aude. It dominates historic trade routes that linked the Atlantic to the Mediterranean Sea and the Massif Central to the Pyrénées. The Romans quickly recognized the location’s strategic importance and occupied the hilltop until the Western Roman Empire fell. The Visigoths subsequently took it over in the fifth century and founded the city, and thereafter a succession of rulers expanded its fortifications until the mid 17th century. 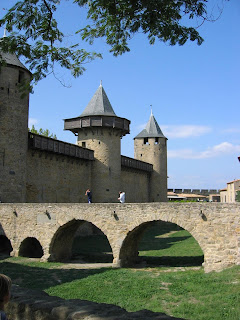 The fortified city was designed with two outer walls with 53 towers and barbicans to prevent attack by siege engines. The castle has its own drawbridge and ditch that guard a central keep. A total of 53 towers built over a long period fortify its walls. A Roman section is noticeably different from the medieval walls, with layers of red brick and roofs of terracotta tile that have a shallow pitch. One of the towers housed the Catholic Inquisition in the 13th century and is still known as the Inquisition Tower. Carcassonne was the first fortress to use hoardings during sieges. Shown at left, these enclosed projecting wooden walkways temporarily built beneath a tower’s roof allowed the fort’s defenders to drop projectiles on attackers below.

Carcassonne was demilitarized under Napoleon and the Restoration. The fortified cité fell into such disrepair that the French government decided to demolish it. The decree caused an uproar and led to a campaign to preserve the fortress as a historical monument.

The architect and legendary gothic revivalist Eugène Viollet-le-Duc was commissioned to renovate it in 1853. The drawing of Carcassonne on the right was found by Jean-Pierre Cros-Mayrevieille in the Gaignières collection of the Bibliothèque Royale. It had a major influence on the project to restore the fortress by reinforcing Viollet-le-Duc’s idea that all of the towers were topped with conical roof trussing. His main focus became to restore the town’s roofs, towers, and ramparts. Unfortunately he ordered the destruction of structures that had encroached on the walls, some of which were of very old. He also used slate instead of terra cotta tiles for the roofs and added pointed tips, which are more typical of northern France. The restoration was strongly criticized during his lifetime, but overall it is generally considered a work of genius, even though it isn’t strictly authentic.

I hope you enjoyed learning about this outstanding fortress city. Join me next month as I delve into more French historical chateaux!

Do you find castles romantic and fascinating too? Please share what appeals the most to you about these amazing fortresses! Is it the structure itself? The historical or social context? The people who inhabited them and how they lived within these strongholds? Something else?

J. M. Hochstetler is the daughter of Mennonite farmers and a lifelong student of history. She is a professional editor, a publisher, and the author of award-winning historical fiction whose books have been endorsed by bestselling authors such as Lori Benton, Laura Frantz, Jocelyn Green, Michelle Moran, and MaryLu Tyndal. Her American Patriot Series is the only comprehensive historical fiction series on the American Revolution. She is also the author of One Holy Night, which won the Christian Small Publishers 2009 Book of the Year, and co-authored the award-winning Northkill Amish Series with Bob Hostetler. Her latest release is Refiner’s Fire, Book 6 of the American Patriot Series.