All Trails Lead to Houston
When I moved to Houston from college in 1957, I heard about the big rodeo and livestock exposition held every February. I became fascinated with the idea of rodeos and how the majority of Houston citizens celebrated Go-Texan Day for the big rodeo parade downtown.

I saw my first parade in February, 1958. I learned that schools closed on that Friday and business allowed people to take a break and witness the parade to kick off the two weeks of rodeo and livestock exposition. As I thought about those days recently, I became curious as to the origin of the rodeo and the trail rides that precede the week and make up most of the parade.

In January, 1932, seven businessmen met for lunch at the Texas State. They decided to host a livestock exposition Houston. They named Sartwelle as the first president and named it the Houston Fat Stock Show.

The very first show opened in April of 1932 at Sam Houston Hall, the Democratic Convention Hall. The show was designed as a regional event to showcase the agriculture and livestock of the area. The show ended with a deficit of $2,800 with approximately 2000 attendees at the end of one week. The only performers were the members of the Future Farmers Band of 68 high school students from across the state. A Grand Champion Steer was named and auctioned off to a local restaurant owner for $504. Here are ranchers bringing in their livestock for one of the early shows and then gathered around the Grand Champion. 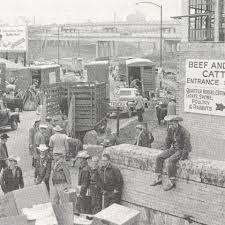 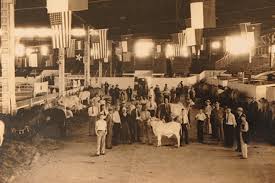 Undaunted, the committee went ahead and held the show for the next four years and attendance grew to the extent that they outgrew the venue. They
began looking for a larger arena in Houston, and at the end of the 1936 show, the old Sam Houston Hall was torn down and the 1937 show was cancelled to allow for construction of a new arena. That year off gave the organizers the opportunity to expand and solidify plans for a larger even. 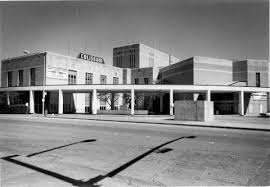 Sam Houston Coliseum: Home to the Rodeo until the Astrodome was built. 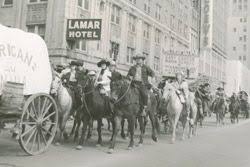 In 1938, they added the parade through downtown Houston, a carnival and a midway, and a rodeo that yielded a $640.50 purse. As interest and attendance grew, so did the plans. In 1940, the organizers decided to add musical entertainment.

At first, local talent performed at the rodeo in the evenings. In 1942, Gene Autrey, the singing cowboy appeared on stage as the first nationally
recognized entertainer to perform at the show. 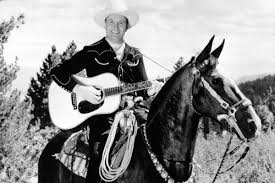 Roy Rogers and Dale Evans were two other popular performers at the rodeo. 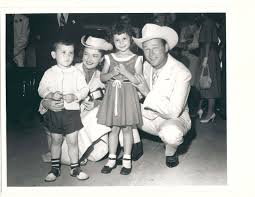 One of the early posters advertising the Rodeo 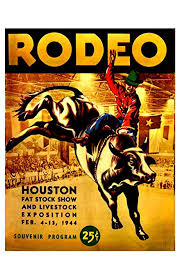 As Houston grew and became more urban, interest flagged in the early 1950’s. In order to attract more  attention, the organizers decided to add a trail drive to the activities to precede the show. The first one originated in 1952 when the media were invited to join some cowboys for a 75 mile ride from Brenham, Texas to Houston and the Fat Stock Show.

When the event was so well-received, the Salt Grass Trail Association decided to continue with the drive. This inspired groups from other parts of the state to do the same. Thus one trail drive for publicity became a much larger event drawing statewide attention.

In 1961, the show became the Houston Livestock Show and Rodeo. The show grew even more and moved from the Sam Houston Coliseum to the Astrodome and Astrohall in the mid 1960’s.

To go along with the trail drives, a day shortly before the first night of the show, the committee designated a Go Texan Day for everyone to wear traditional Western wear. Someone said that now Texans were dressing the way most of the rest of the country thought they dressed all the time. 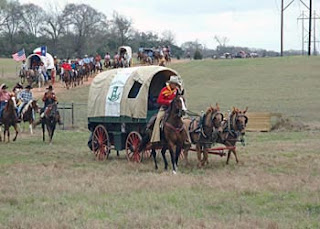 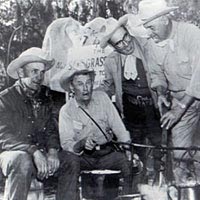 The Salt Grass Trail ride is still the “Granddaddy” of the trail rides that now converge on Houston the final Friday before the show begins. They camp out in Memorial Park the night before the parade and then ride in formation to
downtown Houston for the parade on Saturday morning. People line the highways leading into Houston to greet the trail riders as they make their way to the park from all over Texas.

So, the dream of seven men at a lunch at a hotel gave birth to what is now one of the largest rodeo events in the country and is recognized by the Professional Rodeo Association.

I have several special memories about the event held at the end of February and beginning of March. One of my favorites is the time my middle school homemaking class entered a contest in which we had to decorate a table with a theme of “Go Texan” for the rodeo. My class won first place for middle schools with our theme, “All Trails Lead to Houston” featuring the Salt Grass Trail Ride. I was so proud of my girls.

Pictures are from: https://bit.ly/2lHTG4V  and the files of The Houston Chronicle

Have you ever been to a rodeo? If so, what was your favorite part? Mine is the barrel races.

Martha Rogers is a multi-published author and writes a weekly devotional for ACFW. Since receiving her first novel contract at age 73, Martha has written and published over 50 books. Martha and her husband Rex live in Houston, Texas where they are active members of First Baptist Church. They are the parents of three sons and grandparents to eleven grandchildren and great-grandparents to five. Martha is a retired teacher with twenty-eight years teaching Home Economics and English at the secondary level and eight years at the college level supervising student teachers and teaching freshman English. She is the Director of the Texas Christian Writers Conference held in Houston in August each year, a member of ACFW, ACFW WOTS chapter in Houston, and a member of the writers’ group, Inspirational Writers Alive.