When we moved to Tennessee in October 2017, we didn't know a lot about the history of our new home. We'd simply accepted a job far, far from our people in Texas, but we were excited to embrace the adventure God put in front of us. Little did I know the history of this place would completely captivate me. So much so, my new historical novel releasing in Fall 2020 from Tyndale House Publishers is set right here in Tennessee. It's a time-slip story, and I can't wait to share it with you! Stay tuned!

One of the more interesting tidbits about Tennessee's history is what happened after the war of 1812. A settlement named Nashville had already been established on the Cumberland River, and the territory had already become a state in 1796. Lead by Andrew Jackson, the U.S. government proceeded to purchase land west of the Tennessee River and east of the Mississippi River from the Chickasaw Indian nation. Newspapers of that era referred to it as the Chickasaw Purchase, and after it occurred, the Chickasaw Indians relocated to present-day Mississippi. With land now available to white settlers, towns were needed. But instead of developing naturally with families moving in and starting a settlement, these towns were created by investors. Wealthy investors, usually businessmen from larger eastern cities, hired surveyors to scout the untamed land, relying on their expertise to find the best locations for a population to grow. Once an area had been chosen, roads, lots, and a town square were plotted out.

But now what? What good is a plotted-out town without citizens to make it their home?

That's where newspaper ads came in. These ads not only advertised residential and business lots for sale in a town that didn't actually exist, but they made the new town and surrounding area sound like a settler's paradise. "Never-failing water," "excellent land," and "one of the healthiest counties in the Western District" described the brand new town of Sommerville in an 1825 ad. In August 1824, the Jackson Gazette informed readers that “on Monday the 20th of September next, the Commissioners of the town of Lexington will proceed to sell the balance of the lots remaining unsold in said town."

The ads worked. People flocked to western Tennessee, creating one of America's first land rushes. Newspapers like the Pittsburgh Weekly Gazette reported in July 1820 that “the town of Memphis has been laid off by the proprietors on the Chickasaw Bluff, on the east bank of the Mississippi, 224 miles below the mouth of the Ohio. The site of this town is believed to be the handsomest on the Mississippi below St. Louis.” Interestingly, the man responsible for the ad, John Overton, was from Nashville. He later built The Maxwell House Hotel, the largest and most prestigious hotel in the city at the time. I particularly like the fact that he called potential residents of the town "adventurers"

and truly wanted them to make Memphis their permanent home.


Most of the towns founded by advertisements are still in existence today. People came from eastern states as well as Europe to settle in the beautiful, hilly land. One town, however, did not fair as well. The Memphis Advertiser ran ads for a Tipton County community called Randolph in the fall of 1827. Located on the Mississippi River about 40 miles upstream from Memphis, Randolph had hotels, a newspaper, and a thriving cotton trade within only a few years. From its early years, however, Randolph was doomed. An 1834 cholera epidemic was so bad that, as the Nashville newspaper reported, “It was with great difficulty that coffins, even of the coarsest material, could be procured to bury the dead — so sudden and fatal were the attacks.” Randolph later lost out to Memphis for the U.S. mail route and the railroads.Today there is little left of the town of Randolph.

When we packed up our U-Haul two years ago and drove away from Texas where we'd lived for 35+ years, I felt a little of what those early settlers must have experienced so long ago. I can well imagine the excitement and expectations that swirled through them as they loaded their wagons and moved to the beautiful but unknown state of Tennessee. I like to think I'm a bit of an adventurer too!

Your turn! Have you ever moved to a new town, city, state, country? Tell me about it! 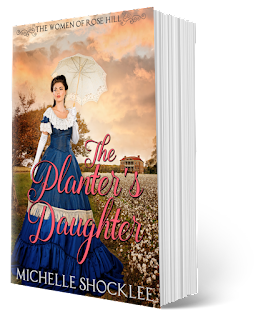 Seth Brantley never wanted to be an overseer. After a runaway slave shot him, ending his career as a Texas Ranger and leaving him with a painful limp, a job on the plantation owned by his father's friend is just what he needs to bide his time before heading to Oregon where a man can start over. What he hadn't bargained on was falling in love with the planter's daughter or finding that everything he once believed about Negroes wasn't true. Amid secrets unraveling and the hatching of a dangerous plan, Seth must become the very thing he'd spent the past four years chasing down: an outlaw. https://www.amazon.com/Michelle-Shocklee/e/B01MYD4TRE/ref=dp_byline_cont_ebooks_1
Posted by Michelle Shocklee at 12:00 AM