Food Taboos Then and Now

I can’t speak for the rest of the world, but in my neck of the woods, sugar is getting a bad rap these days. America’s current fight against obesity, diabetes, and heart disease has a lot of doctors advising folks to avoid sugar, along with several other carbohydrates like white bread, white rice, pastas, and potatoes (the five whites).

This propensity to point toward certain foods as the root of all that ails us got me to thinking. Which foods in history were frowned upon and why? Furthermore, which foods are taboo in other cultures to this day? Let’s take a look.

Let’s start with the obvious. In Leviticus, God gave the Israelites instructions on certain foods to eat and those that were deemed unclean. They could partake of animals that had cloven hooves and chewed the cud. But they were not to eat the camel because it didn’t have cloven hooves, the coney (type of rabbit), the hare, or swine because these didn’t chew the cud.

God also instructed the Israelites that they could eat fish that had scales and fins, but those that didn’t have fins and scales were an abomination. Again, scripture isn’t clear on why swine and scaleless fish were taboo, but in the South, fried catfish is a delicacy. Catfish do not have scales and are considered bottom-feeders. Kinda reminds you of the pig’s eating habits, yes?

If scholars can’t agree on why God listed certain foods that the Israelites couldn’t eat without explaining in detail the reasons, far be it from me to try to come up with an answer. But I do have a theory. The Israelites were called the “Children of God” and God might have thought it best to just say, “Thou shalt NOT”, followed by “Because I said so!” (Any parent reading this will understand!) 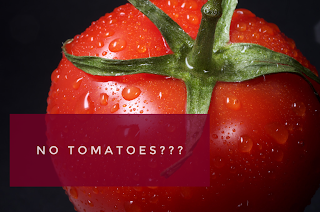 What about non-Biblical forbidden “fruit”? Did you know the tomato was once frowned upon?

Originating in the Andes Mountains, the tomato found its way to Europe in the 16th century. A misclassification by botanists listed it in the nightshade family (it’s actually a fruit) of which many species are highly poisonous, so many Europeans were reluctant to add them to their meals. Tomatoes were found in North America as early as 1710, but was more ornamental than part of the culinary palette. But, even then, the green and black horned tomato worm was believed to be poisonous and kept people from enjoying the fruit. Thankfully, all these fears have been dispelled and the tomato is alive and well worldwide.

Potatoes (ah, the poor potato!!) had a bad rap as far back as 1570s Spain. Similarly to the tomato, they were misclassified in the nightshade family, and their misshapen appearance was disconcerting to some. Interestingly, in Switzerland, it was believed that eating large quantities of potatoes caused scrofula, an infection of the lymph nodes in the neck. (I find that interesting because of the current trend toward avoiding starches due to inflammation. But I digress…)

Food Taboos, Their Origins and Purposes. Okay, I found this entire article fascinating, but I’ll only hit the high-lights. Tribes in West Malaysia and Papua New Guinea have some very strange food taboos, many reserved for women, especially pregnant women. The gist of some of the taboos just seemed to leave all the BACON for the men! (Just kidding…Sort of! See below…) But, regardless, it’s extremely likely that most of these originated from some pregnant mother eating bananas or pawpaws and delivering a deformed baby hundreds of years ago, and all the women agreed not to eat bananas ever again. In our society, we’re the same way. “Don’t eat oranges… they gave my uncle stomach ulcers.” In Papua New Guinea, differing tribes have different taboos. Where one food is banned by one group, another embraces it, so they have no qualms about trading foods that they themselves can’t eat. 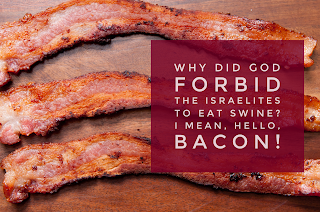 And lest you think I was kidding when I suggested that some cultures implement taboos in order to benefit a select few (ahem!), the author of Food Taboos states, “Observations on food taboos of the inhabitants of mid-west Nigeria were chosen as they represent a particularly good example of a people, in which food taboos appear to have been imposed on society mainly to serve the interests of the 'strongest' section, i.e., the reification of social hegemonies of the society: in particular the menfolk.” In parts of Nigeria, meat and eggs are not given to children because it is believed it will make them steal. Hmmm… I’ll just leave that right there.

I found the Hindu taboos most fascinating. I didn’t realize that the Brahmins eat no meat, fish, or eggs. The other three caste systems do, but even then, in moderation. There is a section in this article that elaborates on Jewish traditions as well, which we’ve discussed already. Unfortunately, the author of Food Taboos wasn’t able to answer the question looming large…

Why did God forbid the Israelites to eat swine? I mean, HELLO. BACON!!!!

Scripture isn’t clear, but scholars have pondered this question for ages. If you’re interested, click on the article below (Why Does the Bible Prohibit Eating Pork?) that lays out the various reasons that swine is/was considered unclean. If I had to choose, I’d go with their unsanitary eating habits, which I’ve chosen to block from my mind in favor of focusing on my beloved bacon!

What say you? Bacon or no bacon?

For more reading into this fascinating topic, visit the following articles:

Why Does the Bible Prohibit Eating Pork  * Once Forbidden Foods  * Food Taboos, Their Origins and Purposes