Ragamuffin Day was a sort of a Halloween on Thanksgiving in New York City.

Ragamuffin Day sources say they don’t know when this tradition started and others say it started around 1870, a few years after President Lincoln declared Thanksgiving a national holiday, and went through WWII. 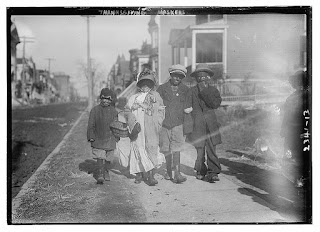 On Thanksgiving, New York City children would dress up in ragged clothes and go around begging pedestrian. It was a sort of parade. Others went door to door. Some ragamuffins painted their faces while other donned masks, and so, Ragamuffins were also often known as Maskers. 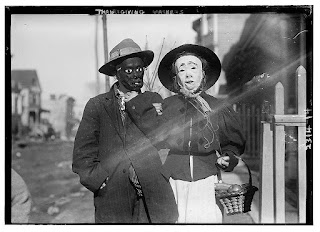 Apparently at this time, both begging and masquerading were technically forbidden, but that didn’t stop the ragamuffins.

People would give these masquerading beggars pennies or a nickel or an apple or something like that. If bystanders didn’t give alms to the beggars, they became the victim of a practical joke. It could be a fishmonger’s horn blasted in their ear (Ouch!) or being hit over the head with a sock full of flour (Ouch again!) or something else. Sounds a lot like Trick-or-Treat. 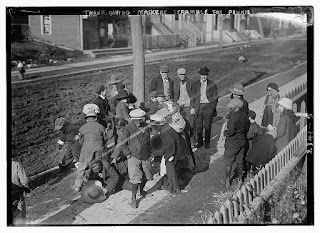 Some people, who the ragamuffins came to, would put pennies on their fire so they would be hot when they threw them down from their windows. This seems mean to me, but I imagine it didn’t take long for the pennies to cool off. This New York City tradition that had started out as good humored fun eventually turned into a nuisance.

This from The Hattiesburg News, Hattiesburg, Miss., November 24, 1908. 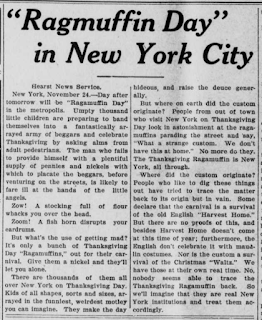 In the 1920s, the thousands of Ragamuffins carousing around the streets got competition for the Macy’s Thanksgiving Day parade.

With the dawn of the Great Depression, throwing red-hot pennies from windows or giving them to every ragamuffin beggar in the street became too precious to part with. 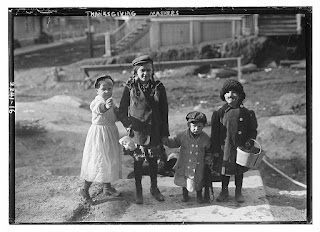 In 1930, the New York school superintendent issued an edict to have Ragamuffin Day stop. For the most part it did but remained in areas like the Bronx, Flatbush, Greenpoint, and other places where the subway ended.

As Halloween became more popular during the Great Depression, Ragamuffin Day became less popular but did continue into the 1940s. The last reported Ragamuffin parade was in 1956. However, starting in the 1970s, some communities have taken up the tradition again to have ragamuffin parades.

THIMBLES AND THREADS: 4 Love Stories Are Quilted Into Broken Lives
When four women put needle and thread to fabric, will their talents lead to love?
Click HERE to order.