In an upstate New York town, the spirit of Christmas giving has a time-honored tradition. A few hardworking buddies came to be known as The Arctic League for enjoying a game of baseball together in a January blizzard. These average Joes would kindle a fire of generosity that would last over a century, and light a spark that still blazes in the hearts of their community to this day.

The Arctic Leaguers frequented Harry Lagonegro's cigar shop in downtown Elmira, New York. As one of their members departed for home on Christmas Day 1912, he encountered a child in pitiable straights. Teeth chattering from cold, in ragged clothes and hungry, the child wept to break a grown man's heart. The man, Danny Sullivan, immediately brought the boy back beside the warm stove of the cigar shop, to introduce him to his friends still gathered there. And truer friends an impoverished child never had. The League met the boy's needs and provided for a very Merry Christmas.

The Arctic League's members found their purpose, and swore on their working man's salaries to see to it that no child within their reach suffered an unhappy Christmas. These Santa's helpers in Chemung County, New York would personally purchase and deliver clothing, food, toys, and other wishes to little girls and boys who otherwise might receive nothing. 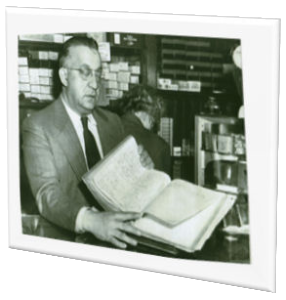 On December 20, 1921 when a fire at the cigar shop destroyed all they had prepared to give away, the newspapers put out the story, and the public quickly stepped up. In just five days, donations flooded in, and the League's gifts for needy children were replenished. Thus began the tradition of the Arctic League's Big Book, a log of each year's donations. Anyone who wished to sign the book and contribute any amount could join the League. As it is to this day.

In subsequent years, technology augmented the fundraising efforts. Radio broadcasts put together by Frank Tripp, one of the original Arctic League members, featured local talent singing Jingle Bells and other Christmas songs. Donations came through the mail for days and weeks after. 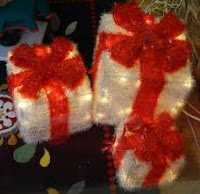 The League stayed true to their mission, and to the promise that no overhead would ever be charged. Volunteers deliver the gifts, and neither war nor flood has stopped this amazing work. When in World War II, gas shortages threatened to ground the operation, soldiers stationed locally at the Holding Point in Horseheads, NY drove army vehicles to help Santa. And again, when Hurricane Agnes rained down a flood of epic proportions in 1972, destroying the headquarters and all of the donations inside, the community rallied once again. Every child received the items on Santa's list, whether they had been evacuated to HUD trailers or moved to new housing. 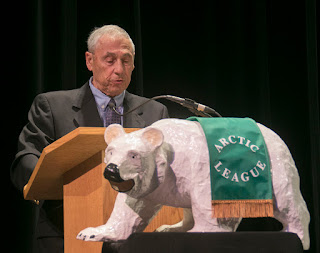 Televised broadcasts each year opened the Big Book for the following year's toys and gifts. A new headquarters in 2007 expanded operations for this 501 (c) (3) nonprofit, and the recent addition of a Facebook page increased visibility. Volunteers pack bags of unwrapped items such as toys, hats, gloves, candy, baseball game tickets, (go, Elmira Pioneers!) and the like, to be brought to families who sign up, and who reside in Chemung County with children 12 years old and under, free of charge. It is the most trusted, most cherished, and oldest charity in the county. 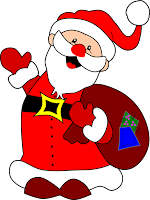 In addition to televised and internet appeals, over a dozen auxiliary locations collect donations throughout the county at local businesses. Nearly 1500 families were served this past year. But it all started with the one boy in 1912 whose cries of distress began an amazing journey of giving that would surpass even the big hearts of these baseball buffs from a century ago. The Arctic League lives on in the hearts of average citizens like Sullivan, Tripp, and the others, and proves that we can all play Santa this special time of year.


Kathleen L. Maher has had an infatuation with books and fictional heroes ever since her preschool crush, Peter Rabbit. Barbour’s best-selling 2018 Victorian Christmas Brides collection includes her novella 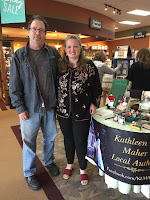 “Love Brick by Brick”, featuring her hometown of Elmira, New York. She won the 2012 ACFW Genesis contest for her Civil War story, The Abolitionist’s Daughter: Book 1 in Sons of the Shenandoah Series which released summer 2018. Book 2 The Chaplain’s Daughter released in the spring 2019. Her novella “Something Old, Something New” appears in Barbour’s 2019 school teacher romance collection Lessons on Love.
Kathleen shares an old farmhouse in upstate New York with her soul mate, their children, and a small zoo of beloved pets.