I took a trip to Portland over the holidays and heard the about the story of the Edgefield Poor Farm. I wanted to share this fascinating story with you.

In the mid-1800’s territorial counties were given the responsibility of caring for the poor. In 1868, Portland, OR, opened their first poor farm facility in West Portland, Hillside Poor Farm. By the early 1900’s, Hillside, a 160-acre farm, was in deplorable condition. Multnomah County needed a new poor farm.

In 1911 the Multnomah County Poor Farm was built east of Portland on what would grow to be 345 acres. The first building house just over 211 residents, although in early days they were often referred to as inmates. More than a third of the first inmates were bedridden with chronic illness and unable to help with the work.

The inmates were required to work if they were able. The Poor Farm grew a number of vegetables, and raised pigs and chickens. Those who were able to work ate three meat meals a day but those who could not work only had meat once a day. (They did get three meals, just not meat every time.) This was referred to as the “meat and mush” tables and you ate according to what you could do.

By 1914, the number of residents had grown to over 300. They now had dairy cows, in addition to the 100 hogs and 420 Plymouth Rock hens and 225 other chickens. The crops produced were vegetables, fruit, hay grain, eggs and potatoes. The 27 acres of potatoes were shared with the county jail. The residents did all the work caring for the crops and livestock. The Poor Farm also had a hospital and a juvenile home.

The peak number of residents happened during the depression around 1935, when there were over 600 living there. There were 535 men and 63 women. The job boom that came in the 1940’s with the onset of World War II, depleted the number of residents. After the war, many of them left, but there were some who were so used to institutional life they couldn’t make it on the outside and chose to stay.

By the 1960’s, many of the lands were leased and the herds were sold. The Poor Farm building was renamed Edgefield and became more of a nursing home. In the 1970’s the number of residents declined as private nursing homes or home health care became more popular. In 1982, the last resident left Edgefield and the place was locked up.

Like most abandoned places, Edgefield suffered from vandals and no upkeep. Water pipes burst. Graffiti covered the walls. Much of what had been left was looted and stolen. Edgefield had been a haven for many but now was in disrepair and needed to be demolished.

But, the historical society stepped in and didn’t want to see such an important part of Multnomah County’s history destroyed. For five years they fought to save Edgefield. They finally won but now faced a difficult decision of what to do with the old Poor Farm. They listed the property with a New York auction house and received no bids. No one wanted a rundown farm.

Then, in the 1990’s, two brothers had a vision for the property. A vision that would maintain the historical aspect but also incorporate a fun place to visit. They began by opening a winery, but added a brewery, and a movie theater. There was doubt about their success, since Edgefield was so far outside Portland. They added in a small lodging part in the building and kept going from there. Today, you can go to Edgefield for dinner at one of the restaurants, or to a concert. You can walk in the gardens or visit one of the artisan shops on the property. Edgefield is a popular place to visit and see some wonderful historical buildings.

Here is a link to the McMenamin’s Edgefield property detailing all they offer. If you are ever in Portland, take the time to visit and see the historical buildings and grounds. Think about what it meant to those who were struggling to have a place to raise their food and to have shelter. 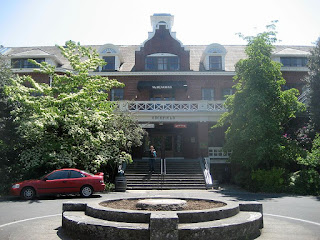 Have you ever visited Edgefield or heard of it? Do you have what was once a Poor Farm in your area? I would love to hear your thoughts.

Nancy J Farrier is an award-winning author who lives in Southern Arizona in the Sonoran Desert. She loves the Southwest with its interesting historical past. When Nancy isn’t writing, she loves to read, do needlecraft, play with her cats, and spend time with her family. You can read more about Nancy and her books on her website: nancyjfarrier.com.
Posted by Nancy J Farrier at 12:30 AM