Stagecoach Robbery and Missing Gold By Donna Schlachter – with giveaway!

Sometimes real life can be stranger than any story we could make up, and one of the biggest solved yet still mysterious stagecoach robberies in history is an example of such. 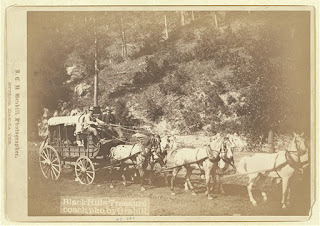 Monitor stagecoach had 5/16" steel armor and loopholes for rifles

In September 1878, at Canyon Springs Stagecoach station, near Deadwood, Dakota Territory, an infamous outlaw known as Lame Johnny, concocted a scheme to steal the payroll and gold from the Homestake Mine.

The mine sent its valuables aboard an armored stage known as the “Monitor”, specially built for bullion and payroll shipments, complete with loopholes for guns and the treasure box bolted to the floor.

Called Lame Johnny because of a deformed foot, he’d tried his hand at living legit, but cowboying wasn’t in his cards. He headed to Deadwood and gained election as a deputy, but honest work didn’t appeal to him. He tried prospecting, then got a job with the Homestake Mine as bookkeeper. Fired when somebody recognized him from his horse rustling days in Texas, he escaped and returned to a life of crime.

He formed up a gang of at least four like-minded men, and they quickly gained a reputation as horse thieves and stagecoach bandits. Because of his experience with the company, he knew the stage schedule, and by the time it pulled into the Canyon Springs station, the attendant was already incapacitated. Caught off guard, the occupants of the stage were fired upon, one killed and two critically injured. After shooting back at the bandits, one guard ran for help.

The gang dragged the Monitor into the trees and apparently had little trouble prying open the supposedly theft-proof treasure box and transferring the contents, (see list below) loading the loot into a wagon in about two hours. The gang then split up and disappeared into the hills, heading east into the canyons.

When the stage didn’t arrive at the Beaver Creek stage station, three men rode north to find out what had happened. Along the road, they met Davis riding for help. The four returned to the Canyon Springs Station where they found the Monitor standing abandoned with the treasure box emptied, the attendant locked in the granary, and the other employees tied to trees in the woods.

When word reached Deadwood, posses were formed in many towns in Dakota and Wyoming to hunt down the bandits, and Homestake posted a fat reward for their capture. The news even reached New York City by September 27th. The posse picked up the trail of the gang in the area toward Pactola. Trailing the gang east, past the boomtown of Rapid City and then out onto the prairie, they found the gang but decided to wait until daybreak to take them. However, the gang nipped out during the night. The posse split up but lost the outlaws’ trail near Fort Pierre on the Missouri River.

One gang member doubled back on the trail into Wyoming and was caught near the site of the robbery, where he was hanged on October 3rd. In October, two other outlaws tried to sell stolen bullion in Deadwood. They were arrested and packed onto a stagecoach to Cheyenne to be tried. Along the road, the stage was stopped by vigilantes who threatened the outlaws and forced a confession. Taken on to Cheyenne with a confession to convict them, the pair were held in jail until November 2. When it was learned that a trial could not be held for several more months, the two were sent back to Deadwood. On November 3rd, their bad luck dogged them and the men were dragged from the stage by five angry vigilantes near Fort Laramie on the Little Cottonwood river and hung them from nearby trees.

Lame Johnny was caught in Pine Ridge in July 1879 and taken to Chadron (Nebraska) where he was put on the Sydney-Deadwood stage to be tried in Deadwood. Lame Johnny confided to several people that he was very much afraid of his guard, who left the stage at Buffalo Gap. Not far out of town a masked rider stopped the stage and took Lame Johnny off , promptly hanging Lame Johnny from a convenient elm tree beside the creek, which is now named after him.

As a result of rewards and the efforts of the lawmen hunting them, within six weeks of the robbery, the Homestake Mine reported that 60% of the loot had been returned. Only two gold bars remained lost.

So what is left to find? Two gold bars, weighing 284 ounces, were never recovered. The bars were likely hidden by the gang somewhere between the Canyon Springs station and Pino Springs. Even the smallest bar, 115 ounces, would be worth well over $100,000 today!


Happy to offer a free ebook in a random drawing from all comments left.

Becky Campbell leaves New York in search of her father, only to learn he was murdered. She determines to fulfill his dream— make the Double Jeopardy mine profitable.

Zeke Graumann, local rancher, will either have to take on a job to pay his overhead expenses, or sell his land. While he admires Becky, he also recognizes she was never cut out to be a rancher’s wife.

Can Becky overcome her mistrust of Zeke, find her father’s killer, and turn her mine into a profitable venture? And will Zeke be forced to give up his land in order to win Becky’s heart?

Donna writes historical suspense under her own name, and contemporary suspense under her alter ego of Leeann Betts, and has been published more than 30 times in novellas and full-length novels. She is a member of ACFW, Writers on the Rock, SinC, and CAN; facilitates a critique group; teaches writing classes; ghostwrites; edits; and judges in writing contests.

Posted by Donna Schlachter at 12:00 AM