Fathoms Deep--the legacy of Mark Twain on my Hometown

Love is what brought Samuel L. Clemens to Elmira, New York, and love is what perpetuates his living legacy here in the town where he is buried.

For those of you who don't know, Samuel Langhorne Clemens is the real name behind the world famous pseudonym Mark Twain. Perhaps if you are a student of classic American literature, you already know how the pen name came to be adopted. Life on the Mississippi tells of Twain's early years in Hannibal, Missouri, and his work on a steamboat, where conductors routinely measured the depths of water with a pole to ensure clearance in shallow riverbeds. They would mete out the depth and call their reading, for example, two fathoms deep, "mark twain." Thus, the name stuck, and like the instrument plunging into the heartland mud, the emerging literary genius soon set his quill into the bosom of the early republic, capturing our fiercely independent culture in his unique humorist's voice.

Twain traveled abroad frequently in his journalistic and literary endeavors, and on one such occasion in 1867 he met young Charlie Langdon, a native of Elmira.  The famed writer was on assignment to cover the Holy Land. On the voyage he had as close to a divine visitation as an avowed agnostic could. A miniature oil portrait Charlie showed Twain of his older sister, Olivia, struck the writer with an almost divine encounter, and he was instantly infatuated. Charlie invited Clemens back to his parents' New York City home once the boat docked, and there Sam met the woman who had stolen his heart.

They shared a family dinner, and a few days later, on New Years Eve, the famed writer called on Miss Langdon. She received him for a bit longer than the customary brief parlor visit when Clemens talked himself into a twelve hour stay. Over the course of the following summer, Olivia's parents invited him to their home in Elmira, where he pursued her.

The Langdons raised Olivia to be a strong thinker, and her family held progressive views about women's equality. Olivia struggled with health in her youth, which might have sidelined her ambitions to attend Elmira Female College--the first institution to offer women the same baccalaureate degree as men. But with her father's influence, and her great determination, she attended off-campus, a very rare privilege, and completed her education.

Though Sam Clemens did not win Miss Olivia "Livy" Langdon's hand on his first proposal, theirs was a storybook romance. Married 150 years ago, February 2, 1870, the couple were devoted to one another in a way that seemed ahead of their time, a marriage based on equality. He once said of her, "I take as much pride in her brains as I do in her beauty." Olivia's proofreads on his work became routine, and Twain often used her suggestions. 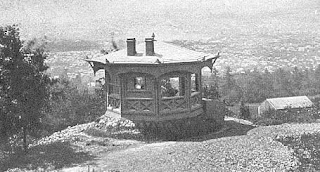 Father-in-law Jervis Langdon's gift to the new couple was a house in Buffalo, NY and a newspaper for Twain to manage. There, Olivia bore him three daughters. The family soon moved to Hartford Connecticut, then the publishing capital of the world. But glorious summers were still spent in Elmira, visiting Olivia's sister Susan Crane and her husband Theodor on their beautiful property on the East Hill heights overlooking Elmira.
This inspiring place, Quarry Farm, was the site where Mark Twain wrote “The Adventures of Tom Sawyer”, “The Adventures of Huckleberry Finn”, “Life on the Mississippi”, “A Connecticut Yankee in King Arthur’s Court”, “The Prince and the Pauper”, “A Tramp Abroad,” as well as numerous other short stories and works. Legend has it that Susan disliked the smell of her brother-in-law's cigars, so Theodor Crane built Twain a heated study with panoramic windows from which to view the valley as he wrote. 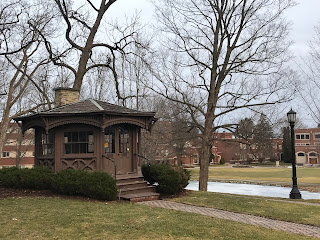 Donated and moved to Elmira College in the 1950's "The Mark Twain Study" is a twelve-foot in diameter octagonal building that originally boasted two fireplaces, though only one remains. It is open to the public by appointment and on certain occasions. Quarry Farm was also donated to Elmira College, and remains, up-kept with its original furnishings, for the exclusive use of scholars of the world renowned writer. 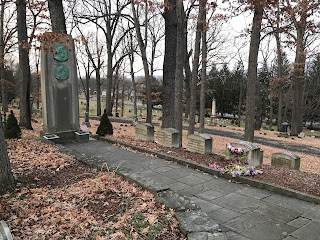 Approximately a mile from the college campus where the study resides, is Woodlawn National Cemetery, Twain's final resting place. (I have written about this historic cemetery in a previous post here.) Twain, Olivia, their children, and the Langdons are laid to rest in the shadow of a twelve foot high monument. Twelve feet, because that is the measure of two fathoms, or "mark twain." People come from all over the world to visit, often leaving cigars or even a bottle of his favorite whiskey. 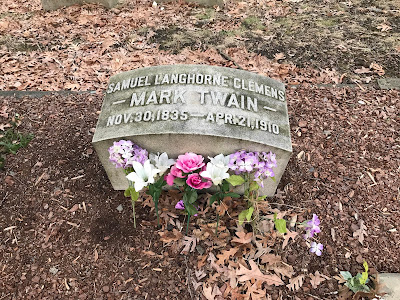 Locals honor the legacy of Twain and the Langdons with great pride. Jervis and his wife, Mrs Olivia Langdon, were abolitionists, involved with the Underground Railroad, patrons and associates of the college, the Elmira Water Cure, women's suffrage, the temperance movement, and many other causes of their times. Twain entertained notaries such as Rudyard Kipling at the Langdon mansion in Elmira. Sadly, the Langdon residence no longer stands. But the indelible mark the man and his family has left both locally and across the literary world is as legendary as the beloved stories born from Twain's pen. 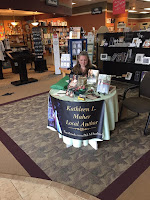 Kathleen L. Maher’s first crush was Peter Rabbit, and she’s loved conflicted heroes ever since. She has two novellas in BARBOUR BOOKS' collections: Victorian Christmas Brides and Lessons on Love. Winner 2012 ACFW Genesis Award. Author of Sons of the Shenandoah Series: The Abolitionist's Daughter and The Chaplain's Daughter.
Kathleen and her husband live in an old farmhouse in upstate NY with their children and a small menagerie.