History of the Rodeo Clown 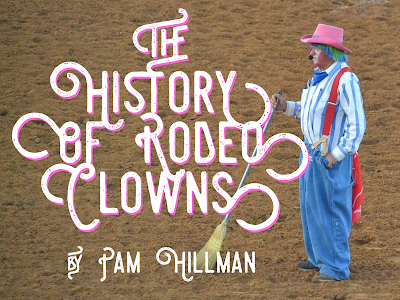 This week an icon in the PRCA rodeo passed away.

Lecile Harris (1937-2020), died in his sleep Wednesday night after the final show of the Dixie National Rodeo and Livestock Show in Mississippi, my home state. At 83 years young, Mr. Harris was still doing what he loved, being a rodeo clown. And he was good at it.

It was a shock to hear the news on Thursday morning, and it got me to thinking about the history of rodeo clowns.

When competitive rodeo became all the rage in the early 1900s, promoters hired cowboys to entertain the crowd between events. Prior to that, let’s just say the games and matches played out on the plains between cowboys matching skills and wits, there wasn’t really any need to “entertain” between the events that the cowboys themselves had come to see. But once there was a paying audience, those people wanted a lot of bang for their buck, and wanted to be entertained every second they were at the “show”. Much like the people at the medieval jousting matches and the Roman Coliseums. 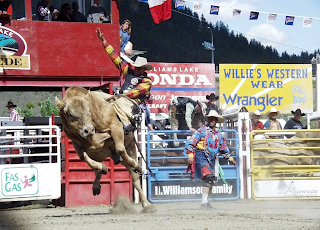 The cowboys whose job it was to entertain the crowd started wearing oversized, baggy clothing, and some even painted their faces just as circus clowns do. The rodeo clown took a lot of cues from circus clowns and court jesters as their job—initially— was the same: to entertain the rowdy crowd. It wasn’t exactly dangerous… unless the crowd became unruly, I suppose.

But soon the crowds grew bored and wanted more danger and ill-tempered bulls were brought in for the bull-riding events. As most of us know, bull riders are only expected to stay on for 8 seconds and after that, that mean, ornery, I-will-trample-everything-in-my-path bull is out for blood.

So the rodeo clowns stepped up to distract the bulls from the rider so he could get to safety. Many times the clowns worked in pairs, and I’ve seen as many as three or four in the arena. In the 1930s, Jasbo Fulkerson introduced a wooden barrel as a barrier and a way to escape the enraged bull. These days, a heavy duty plastic barrel does the trick, but still, it all looks quite scary when you see a bull butting one of those things and you know a bullfighter is inside!

These men are professional athletes and the proper term for them is bullfighter all across the globe. Many still wear baggy bright clothes and all kinds of flashy things to get the bulls’ attention, but make no mistake, they are highly skilled at what they do. When a rider is injured or hung up, they risk their lives to free that rider. Honestly, they are some of the bravest, most skilled men I’ve ever seen in action.

In larger rodeos, there are bullfighters who are 100% focused on the bull, and then there’s the rodeo clown (sometimes called the barrelman) whose job is to poke fun at the bull, the riders, the other bullfighters and entertain the crowd, while also convincing everybody he’s the tough one out there in the ring. But even that seasoned old cowpoke who might be a bit over the hill has paid his dues, and at one time, he was the one with an angry bull breathing down his neck. 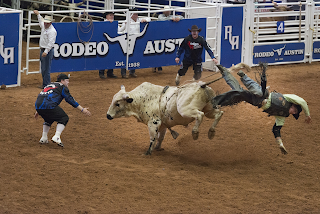 Such was the case with Lecile Harris. He started out wanting to ride bulls, but his tall, lanky frame wasn’t suited to the job. He fell into the job of bullfighter when another guy failed to show up one day, and the rest is history. He was a natural and was always a “class clown”, so he loved hamming it up for the crowd. At the age of 52, he was injured in the arena, which ended his career as a bullfighter, and he spent the next 30 plus years in the ring entertaining the crowds as the main attraction, the Rodeo Clown. Six decades in the ring, and he’d performed a few hours before he drew his last breath.

For more older photos of rodeo clowns, visit Lecile's FB page and scroll through the photos. Or go to Youtube and search for rodeo clowns or rodeo bullfighters to see some of these guys in action!