Irish Woods - The First Illinoisans to Escape to Wisconsin 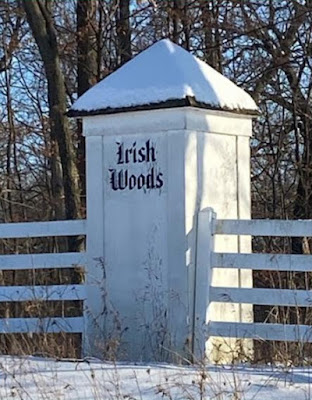 There's a saying that on St. Patrick's Day everyone is Irish. I'm not certain of the origin of that adage but I'm happy to say through having my DNA analyzed, I actually am part Irish. A very very small part. That was a huge surprise to me.

I'm not sure when I first learned of the Irish enclave that sits west of the small town of Lake Geneva, Wisconsin, my hometown. I think it was about the same time as I was researching for my novel Safe Refuge. Even though I grew up there I'd not been aware of the area until then. Once I learned about it, I knew I had to include it in my novel.

The Great Chicago Fire was the strong catalyst that drove many of the Chicago wealthy north to Wisconsin and Geneva Lake to buy up government land that bordered the lakeshore. But, before that cataclysmic event occurred in October 1871, and before the Civil War separated the country into the North and South, the Wisconsin Central Railroad decided to run railroad tracks from Genoa, Wisconsin at the state line with Illinois to Whitewater, Wisconsin. (I have seen varied reports as to where the RR track began. Some have said Elgin, IL.)

The railroad hired a large number of Irish immigrant men to lay down the tracks. Newly landed in the U.S., the men were eager to earn good money and had planned to return to the city with their pay in their pockets and find new work to support their families. But when they came to the end of the line in the small village of Lake Geneva, the railroad paid them their wages but didn't provide transportation back to Illinois. And since it would be a while before the train would start running over those tracks, they were at loose ends.

At the same time, the U.S. government had just released good prospective farmland just west of Lake Geneva along what is now U.S. Highway 50. With their wages in their pockets, many of the immigrants decided to stay in Wisconsin and bought up those available plots of land. They went to work, clearing trees and building homes, then sent for their families. It wasn't long before the heavily wooded area became known as Irish Woods.


These were hard-working people who over the years have contributed much to the town of Lake Geneva and to the west, the smaller village of Williams Bay. Many of the farms still exist today, some passed down from generation to generation. But the farms aren't the only mark these industrious Irish people left on the area. They also worked other trades such as construction and many had a hand in building the wood frame Roman Catholic Church that sat at the top of a hill, dubbed Catholic Hill, on the east side of Lake Geneva. The wooden church building was eventually replaced in the 1880s with a brick building, likely built by the next generation of Irish immigrants.


In addition to the church, Irish Woods residents also built a wood-frame one-room schoolhouse for their children at the corner of Snake Road and Highway 50. Over time, the wooden schoolhouse was moved off the property to a nearby farm and a brick schoolhouse was built. Today Woods School is much larger than one room and serves as a feeder school to several local high schools since open enrollment is the norm there. I first wrote about Woods School back on April 4, 2018. You can read that post by clicking here.

If you were to glance through the names of folks who were born and raised in Lake Geneva, you would see a lot of surnames of the original Irish immigrants who decided to make the Lake Geneva area their new home. Several were my high school classmates, but I never realized back then their unique backstory.

If you are in the Lake Geneva, Wisconsin area on St. Patrick's Day 2020, you might be interested in coming to the Geneva Lake Museum to hear my presentation on Irish Woods and the things I learned about the enclave through my research. 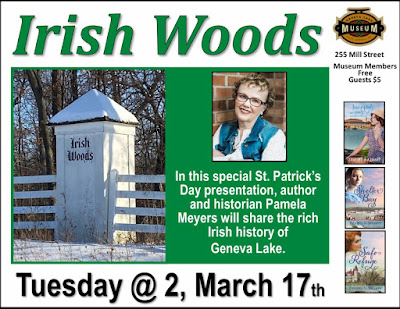 Pamela S. Meyers was raised in Lake Geneva, Wisconsin but has lived on both coasts of the U.S. before returning to the Midwest where she makes her home in Northeast Illinois with her two rescue cats, a short hop to her native Wisconsin where she can often be found nosing around for new story ideas. Her third book in her historical series set in Lake Geneva releases in May and she is working on Book 4.