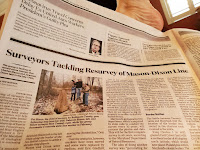 While visiting my dad recently, I was paging through his local newspaper when I saw the headline “Surveyors Tackling Resurvey of Mason-Dixon Line.” As a native of Baltimore, Maryland who grew up hearing about the line that marks the border between Pennsylvania and Maryland, I was intrigued by the article. After all, why did another survey need to occur? Had the line changed? Become confused in some way?

According to the report (and several others I used to fact check), members of both states’ surveyor societies will be involved in surveying the 196-mile border. The Maryland Department of Geological Survey is overseeing the project and has indicated the project is a reconnaissance survey and won’t lead to any changes to the border between the states.

Work has already begun and will be completed by August 2021, with the end goal getting the stone markers placed on the National Register of Historic Places. Being on the Register would allow organizations to obtain grants to maintain and preserve the stones.

Do you wonder why the line exists? Used as a demarcation between the slave and free states during the Civil War may lead you to believe the border was created in the 1800s. However, an argument between Charles Calvert, 5th Baron Baltimore and William Penn’s sons in the mid-1730s is the impetus for the line. The feud became so heated that violence erupted between settlers claiming various loyalties to the two colonies, but the British Crown didn’t intervene until 1760 when it ordered Frederick Calvert, 6th Baron Baltimore to accept the 1732 agreement.

As part of the settlement, the Penns and Calverts commissioned the English team of Charles Mason and Jeremiah Dixon to survey the established boundaries between the Province of Pennsylvania, the Province of Maryland, Delaware Colony and part of Colony and Old Dominion of Virginia.

Survey work began in 1763 and was completed in 1767, at which time the dispute was finally settled. The “Stargazer’s Stone” marks the location of the base point used by Mason and Dixon to begin their work. They marked the line by stones every mile and “crown stones” every five miles, using stone shipped from England. Crown stone markers are etched with the Calvert Coat of Arms and an M on the Maryland side, and the Penn family crest and a P on the Pennsylvania side of the border.

The line was resurveyed in 1849, 1900, and the mid-1960s (no report indicates an exact year). Eight days before his assassination, on November 14, 1963, President Kennedy opened a new section of Interstate 95 where it crossed the Maryland-Delaware border. It would be his last public appearance before the one in Dallas, Texas.

Have you ever crossed the Mason-Dixon line?

According to the OSS training manual, the life expectancy of a radio operator in Nazi-occupied France is six weeks. Partnered with Gerard Lucas, one of the agency's top spies, newly-minted agent Emily Strealer plans to beat those odds. Then their cover is blown and all bets are off. The border to neutral Switzerland is three hundred miles-a long way to run with SS soldiers on their heels. Will Emily and Gerard survive the journey? What about their hearts? Nothing in the manual prepared them for falling in love.

Linda Shenton Matchett writes about ordinary people who did extraordinary things in days gone by. A volunteer docent and archivist for the Wright Museum of WWII, Linda is also a trustee for her local public library. She is a native of Baltimore, Maryland was born a stone's throw from Fort McHenry. Linda has lived in historic places all her life, and is now located in central New Hampshire where her favorite activities include exploring historic sites and immersing herself in the imaginary worlds created by other authors. You can connect with her on her website, Facebook, Twitter, or Pinterest. You can also check out her pages on Goodreads or Bookbub.