Ship's Cats and a Giveaway

I love cats and was delighted when I stumbled across an article about a cat on a naval vessel. I hoped to find more about the early historical aspect of cats on ships, but didn’t find much. Supposedly, the Egyptians are the first seaman to include cats when they sailed. There are several famous cats. I would like to share a few of those stories with you. Some are heartwarming. Some are very sad.

Why cats on ships? Ships are known for having trouble with rats and mice. The rodents destroy food supplies and on earlier vessels they would chew through ropes endangering the crew. Cats, as a natural enemy to the rodent population, were an easy solution. Plus, they provided companionship to the crew during voyages.

One of the earliest cats I read about was called Trim. Trim served under the command of Captain Matthew Flinders, an English navigator and cartographer in the early 1800’s. Trim was the first cat to circumnavigate Australia and the crew loved him almost as much as the captain did. He stayed with the captain his whole life and has been memorialized in literature and statues. One of the statues of Trim sits on a window sill in the State Library of New South Wales in Sidney.

Mrs. Chippy, a male cat, that sailed on the ship, Endurance with Shackleton, was so named because he followed the ship’s carpenter, McNeish, around like a wife. Mrs. Chippy was known for being an excellent mouser and was loved by the crew. When the Endurance became stuck in the ice, Shackleton realized the only way to save the crew was to go by lifeboat to the nearest land mass. He said the dogs and Mrs. Chippy had to remain behind. The crew was sad, but fed Mrs. Chippy her favorite sardines. Then Shackleton decided the animals were to be shot. McNeish objected, but was overruled, and his wonderful companion was killed. McNeish was the only member of the expedition denied the Polar Medal because of his insubordination. In 2004, a bronze likeness of Mrs. Chippy was commissioned and now rests on McNeish’s grave.

Tiddles was actually born aboard ship instead of being brought on board. Tiddles was known for having traveled over 30,000 miles during his time of service. He loved sitting on the aft capstan and playing with the bell rope.

Convoy served aboard the HMS Hermione and was listed
in the ship’s log. He was treated as a member of the crew, receiving his own kit, which included a hammock where he slept. He accompanied the crew on many convoy missions, thus his name. Sadly, Convoy and 87 of the crew were killed in June 1942 when their ship was torpedoed by a German submarine.

Blackie, a crew member aboard the HMS Prince of Wales, became famous during WWII. The HMS Prince of Wales carried Prime Minister Churchhill to his meeting with President Franklin D. Roosevelt in Newfoundland in 1941. This was a secret meeting, however as Churchhill was leaving the ship, he bent down to pet Blackie who came to bid him farewell. Someone took a photograph that became a popular picture in the news. Blackie later survived the sinking of the HMS Prince of Wales, and was taken to Singapore. When Singapore was evacuated, Blackie could not be found. Maybe he snuck aboard another ship to go back to sea. His fate was never determined.

There are so many stories of ship’s cats that I can’t share them all. Here is a wonderful blog post about cats on US ships, with pictures of these felines.

I don’t believe cats are allowed on board Naval vessels any more, which I find a little sad. Have you ever heard of cats aboard ships? Have you ever had a cat in a boat with you? Leave a comment below to be entered in an ebook giveaway for my upcoming release, The Richest Knight. Please leave your email address so I can contact you. 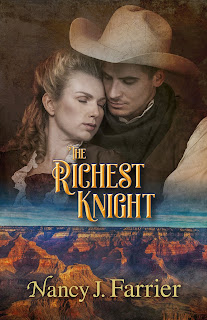 Lillian Robinson is determined to marry a man of means. As a Harvey Girl at the Grand Canyon, her opportunities to meet the man of her dreams should be plentiful. So, why does the lead mule skinner make her heart race every time he comes around? Franklin Knight turned his back on his family. He refused to fall in line and bow to their need for money and power. He chose to work at the Grand Canyon as a muleskinner, a place where he can live out his faith in God.

When Lillian catches Franklin’s attention with her beauty and bright smile, he doesn’t count on her clumsiness, or on her desire to marry into the very society he spurned. Still, he can’t forget her. Will Franklin be able to show her the true meaning of love? Will Lillian recognize the value of a heart of God before she makes the worst mistake of her life?
Posted by Nancy J Farrier at 12:30 AM