Beginning in December 1941, Britain began to conscript single women and widows without children between the ages of twenty and thirty. Later the age would be raised to forty-three. Unlike the men who were drafted, women could choose to work in industry or join one of the military auxiliary services: Auxiliary Territorial Service (ATS), Women’s Auxiliary Air Force (WAAF), or Women’s Royal Naval Service (WRNS).

The WRNS, quickly nicknamed Wrens, were first formed in 1917 for the Great War, then disbanded at the war’s end. Revived in 1939, the organization remained active until being integrated into the Royal Navy in 1993. Wrens could be shore-based or sent overseas.

One of the secret projects that has only recently come to light took place at Derby House. A bit of a misnomer, the U-shaped structure stands several stories high and looks more like an office building. A reinforced bunker was constructed to house the command center for Battle of the Atlantic, known as the Western Approaches Tactical Unit (WATU). 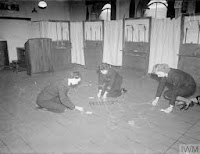 Created in January 1942, and led by Captain Gilbert Roberts (who had been discharged from the military for tuberculosis), the group used the concept of gaming to create battle strategies to combat wolf-packs of German submarines who were decimating Allied convoys. Although a gifted communication, Roberts had a tough time initially convincing the higher ups of the validity of using war games to develop tactics. Many commanders felt their strategies were acceptable, and the subs got “lucky.”

After one British commander successfully evaded a wolf-pack, his technique was put to the test through the use of Roberts’s game. Run several times, the exercise proved that in fact, he’d been the lucky one. As a result, Roberts was given the go-ahead to expand his organization. He quickly recruited over sixty-five Wrens, the youngest of whom was 17 years old to staff the project.

To conduct the games, brown linoleum covered the floor on which gridlines were spaced ten inches apart representing one nautical mile per square. Small wooden models represented the ships and U-boats. Around the grid, vertical screens of canvas with peepholes were set up. Players who controlled the escort ships stood behind the screens and could only view the game through the peepholes. Players who controlled the U-boats had an unrestricted view of the board. Different colored chalk indicated the U-boats’ and escort ships’ movements. Players had two minutes per turn to make decisions and give orders. Interestingly, devices were used to create the noise players would be subjected to in real life. Over the course of a little more than a year, the games enabled the Allies to create effective defensive strategies against the wolf-packs and train hundreds of commanders. By may 1943, Admiral Doenitz ordered the withdrawal of German subs in the Atlantic, and food imports to Britain rose to over 55 million tons.

In this case, Wrens were able to get the better of the Wolves.

Have you ever played Milton-Bradle's Battleship? If so, you might consider yourself an honorary Wren.

The Mechanic & The MD: High school and college were a nightmare for Doris Strealer. Being an adult isn’t much better. After joining the Red Cross Motor Corps, she finally feels at home. Until she comes face to face with her past in the form of Ronald McCann.

On the brink of a successful career as a surgeon, Ron’s plans crumble when he’s drafted and assigned to an evacuation hospital in England, the last place he expects to run into a former schoolmate. The gangly tomboy has transformed into a beauty, but a broken engagement leaves him with no desire to risk his heart again.

Linda Shenton Matchett writes about ordinary people who did extraordinary things in days gone by. A volunteer docent and archivist for the Wright Museum of WWII, Linda is also a trustee for her local public library. She is a native of Baltimore, Maryland and was born a stone's throw from Fort McHenry. Linda has lived in historic places all her life, and is now located in central New Hampshire where her favorite activities include exploring historic sites and immersing herself in the imaginary worlds created by other authors. You can connect with her on http://www.LindaShentonMatchett.com.
Posted by Linda Matchett at 12:30 AM