by Martha Rogers
As a young girl, I fell in love with Elsie, the Borden Cow, and we always had Borden's milk in our refrigerator. I have a half-gallon container of Borden buttermilk in my refrigerator now.

I remember going to exhibitions and fairs to see Elsie and was even able to pet her. Even now as I pour milk from a Borden's milk container, I am taken back to those times. The milk company had a distribution center near us in Houston, but its headquarters are based in Dallas. Not long ago I read about the company declaring bankruptcy to allow for restructuring. It seems that the onslaught of almond, soy and other plant based products had a part in the company losing money. Then in recent days, the pandemic has played havoc with the dairy industry as well. 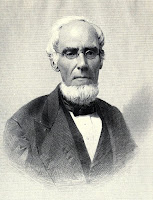 This all led to my looking into the origins of the company and this man named Gail who founded the company 163 years ago.

Gail Borden entered this world in Norwich NY on November 9, 1801. His father, Gail Borden Jr. was a pioneer and landowner. His mother, Philadelphia Borden, died at the age of 48 from yellow fever. In 1816 the family moved to Kentucky. He spent his youth there and in Indiana where he studied to be a land surveyor.

In 1822 he moved to Mississippi and met his wife, Penelope Mercer. They married in 1828 and became a county surveyor and teacher. The next year they moved to Texas where Gail Borden did the land survey for Houston and Galveston and became the head of the Land Office. 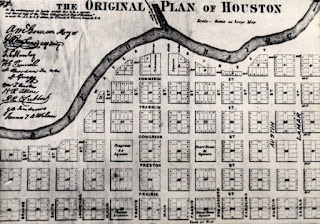 This is his plan for the streets of Houston along Buffalo Bayou when Houston was growing as a town. The streets are still pretty much the same with the same names he laid out. 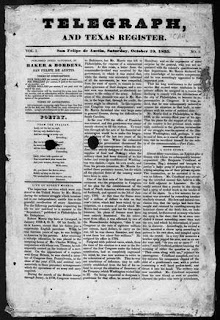 Gail and his brother tried their hand at publishing a newspaper and were successful at it The Telegraph and Texas Register did well as an important source of public documents and history. When they tried to flee when the Mexican soldiers advanced into Texas, the soldiers caught up him and his brother. They confiscated the typewriter and threw it into a bayou and that ended the newspaper. This is a copy of the newspaper from 1835.

Borden became very interested in food concentration, realizing that food had to be preserved and concentrated to ensure nutrition. He experimented with various foods and invented a "meat biscuit" containing beef extract. It proved to be a popular food and even soldiers and miners found it be a suitable food ration for their needs. He even won a Gold Medal at the Great Council Exhibit at the London World's Fair in 1851. He then began experimenting with coffee, tea, and cocoa.

On his way home from the fair, he witnessed the death of several children who died from drinking contaminated milk. He decided to solve this problem. In 1856, several years before the Civil War, he invented condensed milk in a lab he had set up. In 1856, he received both British and US patents for his invention. 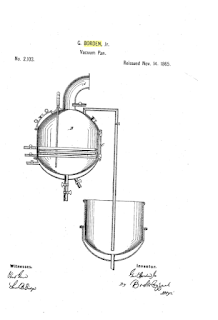 This is a diagram of the machine he invented to condense the milk.

After it was deemed to be safe way to preserve milk, he moved up to New York and met with Jeremiah Milbank who helped Gail form and found the New York Condensed Milk Company. In 1899 it was renamed Borden Milk Company. They

established companies in Connecticut, New York, Maine and Illinois. The company added evaporated milk and above is an ad for them both. What would Lemon Ice Box Pie or Key Lime Pie be without condensed milk?

Gail Borden became a wealthy man and shared his wealth as he supported poorly-paid minorities and teacher. A well-known philanthropist, he helped organize a school for African-Americans and helped build six new churches.

His company became the largest produce of dairy and pasta products along with snacks, jams, jellies and ice cream. In more modern times they sold Elmer's Glue and Krazy Glue. The Borden brand eventually became the well-known Eagle Brand. In 2007, Smucker's bought the brand. 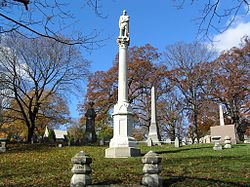 Gail returned to Texas and died in Borden, Texas in 1874. His body was returned to New York where he is buried at Woodlawn Cemetary there.

So, who was this man named Gail? He was a respected business man with a fine 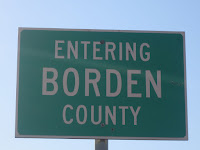 reputation for taking care of people. We owe a great deal to Gail Borden. Texas has a Borden County, a town named Borden, and a town named Gail.