The Horrific aftermath of the Civil War for the South

I wrote a series several years ago Escape to Paradise. It's a trilogy surrounding the story of a group of disgruntled Southerners who left the South after losing the Civil War and headed toward greener pastures. In my story, they sail for the lush jungles of Brazil!, which many of them did in real life. It's truly a fascinating history, and you can still see remnants of their Confederate culture in Brazil.
Most people don't know how bad things became for the South after their defeat. I know I didn't until I started researching. The North was angry and they wanted revenge for their lost loved ones, so they came down upon the south like a fierce judge's gavel. Here are just a few facts I uncovered during my research.
Can you imagine what it must have been like for these Southerners? First of all, they lost the war, secondly, much of their farms and lands are in ruin, and thirdly, most families had lost at least one family member to the war and had several disabled. Defeat covered the South with the gray pallor of hopelessness.
Yes, I understand the war was necessary to stop slavery. I am not sticking up for what the Southerners did. Slavery is an abomination and an evil that had to be stopped. However, I do believe the war was mostly fought over money as most wars are. 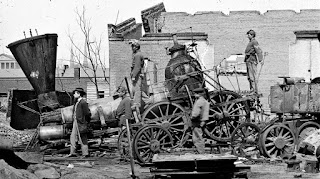 Anyway, the aftermath for the Southerners was worse than the war itself!
Union troops tore up fences, drove cattle away, burned houses, confiscated lands, and stole food. The civilian population had nowhere to live and little food to eat. Many sought refuge under trees or in borrowed tents. Railroads were torn up, schools closed, banks insolvent, towns and cities reduced to rubble.

Northern merchants and speculators moved in, taking jobs from southerners. Factories were desolate, merchant ships swept out to sea, livestock consumed, notes, bonds, mortgages, and Confederate currency became worthless. Bands of robbers swept the land. Violence and anarchy ruled.
Southerners could not transfer title or participate in some business activities until they received a pardon from the North. Neither could they hold state of federal office. Northern tax collectors descended to make south pay for the war. They bought land cheap for resale. 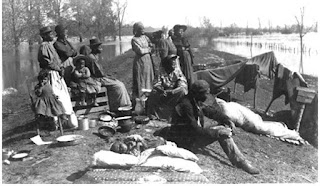 out trial and deprived them of rights of citizens.
Many confederate officers were hanged and imprisoned, while notherners often called for the hanging of regular southern citizens whom they considered traitors Whole towns lay in ruins.
The landscape “looked for many miles like a broad black streak of ruin and desolation, the fences all gone; lonesome smoke stacks, surrounded by dark heaps of ashes and cinders marking spots where human habitation had stood; the fields along the road wildly overgrown by weeds with here and there a sickly patch of cotton cultivated by Negro squatters.”

People left because of anarchy, poverty and demoralization. As a consequence nearly 3 million Southerners left the South in the years following the Civil War. Some went to Canada, Mexico, out west, and some went to Brazil to start over in a land where they could be free.
If you're interested in the fascinating history of these Confederates who traveled to start fresh in Brazil, check out my Escape to Paradise series! 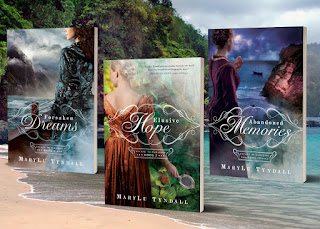 Posted by MaryLu Tyndall at 3:30 AM