A Town Under the River: Bayou Sara, Louisiana

Before the Flood Waters Came
by Martha Rogers

On the banks of the Mississippi just down from the town of St. Francisville, the once thriving port of Bayou Sara, Louisiana now lies at the bottom of the river. Bayou Sara and St. Francisville were the two main villiages of West Feliciana Parish.

Back in the 1840's and early '50's, my great-great grandfather held a partnership in a shipping company in this town. John Whiteman loved the river and the steamboats that visited the port town daily. His five sons worked with him from the youngest Theodore to the eldest Charles. As a widower, John kept the family of boys together and working until his death in 1859. 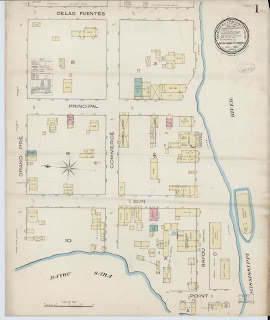 This is a map of the area that we found in the archives at the county courthouse when we visited to do family research.

John left his half of the business to his sons, but then the Civil War came along in 1861 and the four oldest boys enlisted as did most of the young men in the area. The port and the shipping business continued in the hands of their partner, and was an important stopping point along the river at that time.

The town of Bayou Sara goes back to the early days of  French colonists in the early 1790's. At one time it was the largest antebellum Mississippi River port between Memphis and New Orleans until Natchez claimed that title. Then Great Britain took over after it defeated France in the Seven Year's War in 1763. Then at the end of the American Revolutionary War, Great Britain ceded what it called West Florida to Spain in 1783, as part of the Treaty of Paris.

Ponce de Leon re-named the area Nueva Feliciana which means New Happy Land in Spanish. The land had unequaled flora, flowing waters and fertile soil which were the main attractions to the area. The parish itself was diverse in topography as well. In 1810 the area became part of the the U.S. and grew so fast that in 1824, the parish was divided into  two parishes with Bayou Sara on the banks of the river as the main port town that furnished supplies up to Woodville, Mississippi and around the area before the steamboats went on down to New Orleans.

In 1862, gunboat crews tried to burn the town to the ground. They did destroy much of it, but no lives were lost, and the town rebuilt.

Despite this tragedy, an unusual event involving the Union and the Confederates took place a year later. I posted about this event of the Civil War a year or so ago. It took place in Bayou Sara and St. Francisville in 1863. It is called the "Day the Civil War Stopped." On that day, Union Navy officer John E. Hart, who commanded an attack on the town of St. Francisville from his ship docked at Bayou Sara, became ill and died aboard his ship. Hart happened to be a Mason, and when Confederate officer W.W. Leake, also a Mason, learned this, he ordered the battle to stop for a Masonic funeral for Hart. In a twist of irony, he was buried in the cemetery at Grace Episcopal Church, the same church and town as had been under attack by his orders. This is a picture of John Hart. 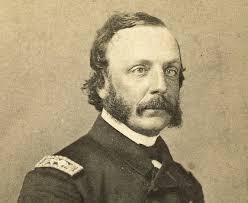 The town thrived as a port, but after the war, my great-grandfather Manfred and his brothers sold their interest in the shipping company to their partner and moved away from Bayou Sara. Manfred came to Texas where he practiced medicine until his death in the 1890's. 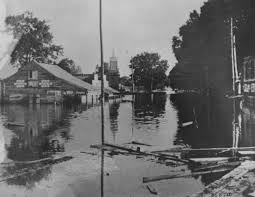 The town survived the war through the efforts of Jewish emigrants who fled religious persecution in Germany. They settled there and made important contributions to commerce in the lean years following the war.

The town also survived hurricanes and the flood of 1912. Although businesses and homes were flooded, the waters receded and the town recovered.


Then, in the spring of 1927, the town finally met its match. The Mississippi and Atchafalaya rivers were swollen from months of rainfall that still saw no end. In late April the waters swelled to the point that by May, the two rivers burst through their levees sending mud and water into businesses, homes, and farmland on the banks and on across Louisiana where thousands had to flee the rising waters. Thousands were left homeless, and were never able to return. 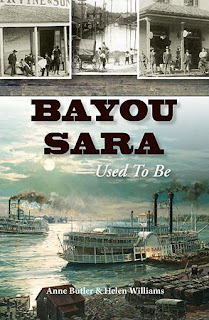 This book commemorates the Great Flood

This event, known simply as the Great Flood of 1927 would change the shape of Louisiana forever. Along the banks of West Feliciana Parish, the waters completely covered the town of Bayou Sara and never receded. That port now lies at the bottom of the Mississippi River. You can drive down from St. Francisville to the river and catch a ferry to take you across the broad expanse of water to the other side. Other small towns tried to rebuild, but some never reached the same life they once had. 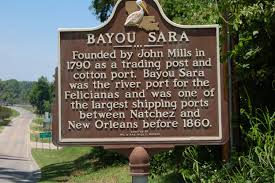 This marker stands to let others know about the history of the town and port of Bayou Sara.

As we crossed the Mississippi River from the landing to the other side, I thought of my ancestors and the business and home they had now being under all that water. It's a strange feeling to know that a once thriving town is under the water where you are boarding a ferry.

My novel, Love Stays True is set in that area and tells the story of my great-grandfather Manfred and his sweetheart, my great-grandmother Sally Dyer.

In April 1865, the day following the surrender at Appomattox, Manfred McDaniel Whiteman and his brother, Edward, are released in an exchange of prisoners. They are given a few provisions, and they begin a long journey to their home in Bayou Sara, Louisiana.

At home Sallie Dyer is waiting word of her beloved Manfred. Though just a young girl when Manfred left, Sallie has grown into a caring young woman who is determined to wait for her love--despite her father’s worries that she is wasting her life on someone who may never come home and suggests a local young man now home from the war.

On their journey Manfred and his brother encounter storms and thieves and are even thrown in jail. Will he make the journey home before someone else claims Sallie’s hand?  https://amzn.to/2CtsizH

Martha Rogers is a free-lance writer and multi-published author from Realms Fiction of Charisma Media and Winged Publications. She was named Writer of the Year at the Texas Christian Writers Conference in 2009. She is a member of ACFW and writes the weekly Verse of the Week for the ACFW Loop. ACFW awarded her the Volunteer of the Year in 2014. Her first electronic series from Winged Publications, Love in the Bayou City of Texas, debuted in the spring of 2015.  Martha is a frequent speaker for writing workshops and the Texas Christian Writers Conference. She is a retired teacher and lives in Houston with her husband, Rex. Their favorite pastime is spending time with their twelve grandchildren and five, soon to be six great-grandchildren.