The Bell of Liberty 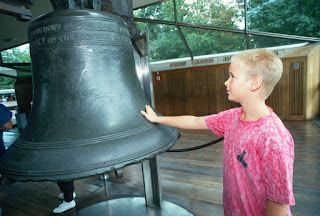 This photo of the child touching the Liberty Bell brings back happy memories for me.

Many years ago, I was a child with my small hand touching this same bell that both fascinated me and stirred a desire to know more about our American history. That craving still exists in my heart, as my adult years have brought me to research and write about the years of the American Revolution.

Because of its name, many often think the Liberty Bell was cast during the Revolution. It, in fact, was commissioned by the Quakers in Philadelphia in 1751 to commemorate the 50thanniversary of William Penn founding the colony of Pennsylvania. 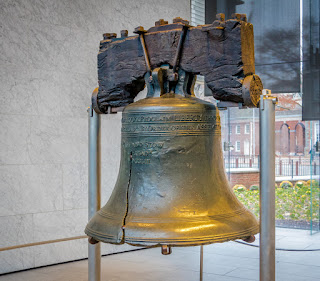 Since Quakers were the strongest voice against slavery that was rampant in all the colonies, the Pennsylvania Assembly declared a “Year of Jubilee” and ordered the creation of the bell to be placed in the Philadelphia State House.

According to author William Federer, the Speaker of the House, Isaac Norris, quoted from Leviticus 25: “And ye shall make hallow the fiftieth year, and proclaim liberty throughout all the land unto all the inhabitants thereof; it shall be a jubilee.”

In accordance with the Israelite calendar, the year of Jubilee was to free slaves, forgive debts, and return lands to the original families who owned them.

As proponents of freedom, the Pennsylvania legislature requested these words to be inscribed on the bell: “Proclaim liberty throughout all the land unto all the inhabitants thereof.”

Since the Liberty Bell became a symbol of freedom during the American Revolution, it seems ironic that it was cast in England. The irony lies in the fact that the bell was rung during the first public reading of the Declaration of Independence on July 8, 1776 when the writers of the document vilified their Mother Country. Some historians say it was after this event that it became known as the Liberty Bell. Others claim it was not referred to as the Liberty Bell until the 1830’s when an abolitionist group adopted it as their symbol. Regardless of the origin of the name, we all today refer to it as such.

After the British invaded Philadelphia in 1777, local Patriots feared the British would steal the bell and melt it down to be used for armaments. The Americans snuck it out of the city, transported the 2,000-pound bell into a wagon, then covered it with hay and manure to hide it. The bell was taken to Zion Reformed Church in Allentown, PA where it was hidden in the church’s basement. When the British left Philadelphia in 1778, it was returned.

The famous crack in the bell is a subject of speculation. The original bell, commissioned in 1751, cracked when it underwent a test strike. The metal was too brittle, causing it to be recast twice. The final version was comprised of 2,080 pounds total of copper, tin, and small amounts of lead, zinc, arsenic, gold and silver.

Despite numerous speculations about the crack’s origin—during the visit of Marquis de Lafayette in 1824 or while tolling to signal a fire or during the ringing for the funeral of Chief Justice John Marshall in 1835—historical accounts verify it was damaged by 1846. Although attempts were made to repair the crack, it did fracture beyond repair and was retired from “ringing duty.” 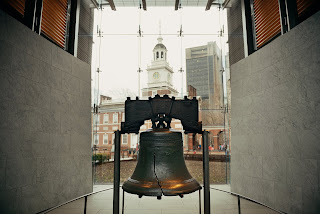 It was placed in a pavilion near Independence Hall in 1776, then moved to Liberty Bell Center in Independence National Historic Park. Now millions come to view the famous bell each year.

Just like a young girl did many years ago in Philadelphia. As the curious child carefully fingered the crack, a writer of historical fiction was born. 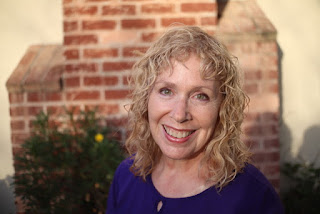 Elaine Marie Cooper has two historical fiction books that released in 2019: War’s Respite(Prequel novella) and Love’s Kindling. They are the first two books in the Dawn of AmericaSeries set in Revolutionary War Connecticut. This series will re-release with a new publisher beginning in 2021.
Cooper is the award-winning author of Fields of the Fatherless and Bethany’s Calendar. Her 2016 release (Saratoga Letters) was finalist in Historical Romance in both the Selah Awards and Next Generation Indie Book Awards. She has been published in Chicken Soup for the Soul and HomeLife magazine. She also penned the three-book historical series, Deer Run Saga.
Her upcoming release, Scarred Vessels, is about the black soldiers in the American Revolution. Look for it in October 2020. You can visit her website/ blog at www.elainemariecooper.com

Posted by Elaine Marie Cooper at 12:30 AM