Time to wake up!


At one time or another in our lives, most of us have been awakened by an alarm of some kind whether it be a rooster, a clock, a radio, or an alarm on our cell phones. Many of us may have had a Big Ben clock or one from Seth Thomas or other well known clock companies, but did you know alarm clocks go back to BC times?

Although the first mechanical clocks didn't come into existence until around the 15th century, historians have found earlier civilizations used some forms of an alarm system for clocks.

Back in ancient times 450 to 300 B.C., Plato is said to have possessed a rather large water clock rigged with an unspecified alarm signal similar to the sound of a water organ. Other Greeks, Romans, and even Buddhists devised similar systems to wake them or to remind them of appointments.

In the 6th century, a Christian rhetorician Gaza named Procopius possessed a clock which featured a complex striking mechanism. It featured an hourly gong and figures moving mechanically day and night.

Mechanical alarm clocks that could be set by the user date back to around the 15th century in Europe. These early clocks had a ring of holes in the clock dial and time was set by placing a pin in the hole with the time the user wanted the alarm to sound. However, most people didn't own one and depended on the sun to wake them or the factories which would blare out with whistles to wake those nearby and to signify opening and closing times.  Another popular method in Britain and Ireland involved hiring a knocker-upper who would go around banging on doors and windows of homes to awaken the occupants. The term is still used by Brits today although not the actual practice.

Levi Hutchins of Concord, New Hampshire, created the first American alarm clock in 1787. He made it only for himself and it rang only at 4 AM to wake him for his job. He never patented the idea. However, before Hutchins, the German and English had invented their own versions. Later, in 1847, a French inventor, Antoine Redier patented an adjustable alarm clock for use by the general public. He was the first to patent the idea of a personal alarm clock which allowed the user to set his own time for rising instead of depending on others to wake him. 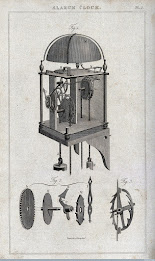 Historian Martin Levinson wrote that in the expanding urban and industrial world, people became more obligated to know the time and to be on time. By the late nineteenth century people began actively seeking alarm clocks.

An early cartoon when alarm clocks were a novelty 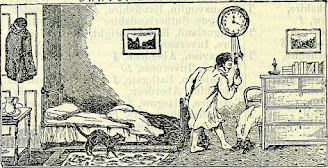 In 1885, a group of men led by Charles Stahlberg formed the United Clock Company. Shortly after receiving a patent for their clocks with inset brass bushings, the company went bankrupt with no known surviving examples of their clocks. 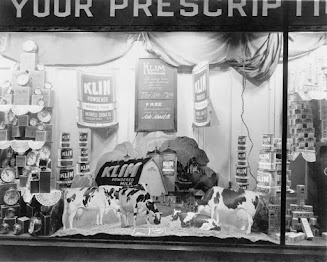 From the 1920s on the alarm clock companies continued to innovate with portable travel clocks and radio alarm clocks that allowed consumers to wake up to something more compelling than a bell. 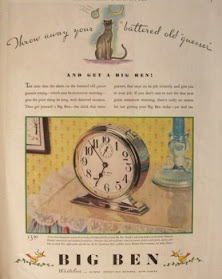 After another bankruptcy, the company reorganized in 1888 as the Western Clock Manufacturing Company. In 1908 they received the patent for the "Big Ben" alarm clock movement and introduced to public market in 1909. The "manufacturing" part was eliminated from the company name. In 1910, Ben Ben became the first clock advertised nationally with ads in The Saturday Evening Post.
One of the early ads for a Big Ben Alarm Clock

In 1931, the company merged with Seth Thomas Clock Company with both becoming divisions of General Time Corporation. Westclox became its own division in 1936. 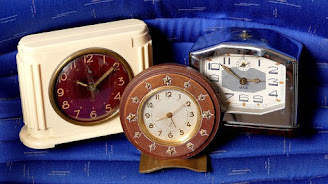 When the Second World War began, metal became scarce and a halt was made in the make of regular alarm clocks although they did allow alarm clocks to be made for war-time workers in war related industries. Then in early 1944, alarm clocks became one of the first to back in production with the debut of post-war designs. Some of which are shown in the above picture.

Then along came General Electric-Telechron who made a clock with the snooze button. It quickly became popular, and became an essential part of alarm clocks. Then the clock radio came along with the alarm replaced by radio programs to wake one up. Now, with cell phones being equipped with alarms, even clock radios are not as popular as they once were. Old-fashioned alarm clocks are becoming a thing of the past and a part of our nostalgia of the "old days."

What do you use as an alarm to wake you up in the mornings or to remind you of what needs to be done?

It's Christmas in August this month with my newest Christmas release. 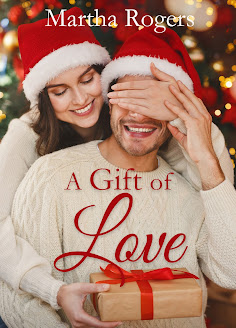 Cherie Kenton came home to Edenville to become business manager of her aunt’s floral shop but didn't expect to find Troy McNeil as partner with his father in the law office directly across the street. Ten years living with the memory of how he humiliated her at their prom has built a wall around Cherie’s heart. It’s a wall Troy is determined to tear down and win back the trust and love of the only girl he has ever truly loved. Will his one selfish mistake as a teenager ruin their chances of ever finding happiness, or will this be the Christmas for the gift of love to reunite their hearts?