History of the Sapphire: September's Birthstone 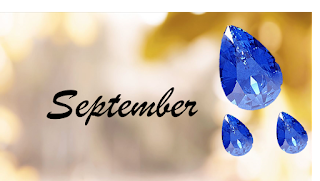 Welcome to September! I'm so excited for this month because it will hopefully be the birth month of my first child. :D Also, it signals the beginning of fall, which is one of my two favorite seasons.

Today we get to study the fascinating history of the Sapphire stone. The royal blue color of the stone has been a standard that other stones, such as topaz and tanzanite, are compared to. However, while the September birth stone is often thought of as the blue sapphire, it can actually be any color except red. But we'll stick mostly with the blue for today's study.

We have record of the Ancient Romans and Greeks adoring this stone. Their kings and queens believed it protected the wearer from both harm and envy. Throughout history, it was believed the stone guarded chastity, made peace with enemies, influenced spirits, and revealed the secrets of oracles. In Italy, there remains a superstition that the stone can help cure eye problems and melancholy.

Information on ancient mining sites is limited. However today sapphire can be found in many countries, making it more available than many rare jewels.

The sapphire stone is mentioned at least a dozen times in the Bible, particularly in visions of heaven, which may be why it is associated with the heavenlies. It was one of the twelve stones inlaid in the breastplate of the High Priest in Exodus chapter 28 and is also mentioned as the stones in the foundation of the New Jerusalem in Revelation. This is probably why in the medieval times, clergy would wear this stone as a symbol of heaven.

The stone has been associated with royalty and romance for centuries.  I

t is commonly known that Prince Charles presented the Princess Diana with a sapphire engagement ring back in 1981, however that gift was inspired by an even older wedding gift. The inspiration behind the design went back to a  sapphire-and-diamond cluster brooch which was a wedding present from Prince Albert to Queen Victoria in 1840. It is said that Queen Victoria donned the brooch on her wedding day as her "something blue". Most of us have heard of the sapphire engagement ring because Prince William presented it to Kate Middleton as her engagement ring as a way to include his mother in this life event.

The September birthstone is both beautiful and historically rich. If you are blessed enough to own one, you are in the company of kings and queens!

Happy Birthday to all of you born in September!

She lives in Colorado Springs near her favorite mountain and between enjoying life as a newlywed, and spinning stories out of soap bubbles, Amber loves to connect with readers and hang out on Goodreads with other bookish peoples.