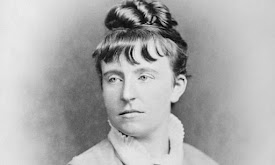 My parents are voracious readers and passed their love of books to me. One of my favorite stories as a child was Frances Hodgeson Burnett's The Secret Garden. I read the story multiple times while growing up and still have my dog-eared copy.
For those of you not familiar with the plot,

The Secret Garden is about ten-year-old Mary Lennox who lives in India with her British parents. She is alternately spoiled by the servants and neglected by her parents, becoming an arrogant, self-centered child. After her parents die of cholera, she is sent to live with a wealthy uncle she's never met. Unhappy, she makes everyone around her miserable until she finally befriends one of the maids who tells her about a walled garden that has been locked because of a tragic accident involving Mary's aunt. Mary begins to search for the garden, and a series of events change her life.
Born November 24, 1849 in Cheetham, Manchester, England, Frances Hodgeson was the third of five children. When she was three years old, her father died of a stroke creating financial difficulties for the family. Her mother sold their house and moved in with relatives who owned a large house with an enclosed garden, obviously making an impact on young Frances who had an active imagination and filled notebook after notebook with stories during these years.

Continuing to struggle to makes ends meet, Frances's mother emigrated to the United States in 1865 to live with her brother near Knoxville, Tennessee. However, money was tight for the extended family, and everyone pitched in to help with the finances. Frances turned to writing to earn money, and it wasn't long before her stories were regularly appearing in "Godey's Lady's Book," "Scribner's Monthly," "Peterson's Magazine," and "Harper's Bazaar." By 1869, she'd saved enough money to move the family into a nicer home.
In 1870, Frances's mother died, and three years later Frances married Swan Burnett, a family friend. The marriage produced two children, and she continued to publish stories. Her first book, The Lass o' Lowrie's, published in 1877, did well, and she became a rising star in the publishing world. Then came Little Lord Fauntleroy, the most successful of all her publications, which brought her wealth and fame. The book's main character, Cedric (based on her son Vivian who was haunted by the association until his death) was established as a model for young boys.
Queen Victoria's Golden Jubilee was in 1887, and Frances journeyed to England 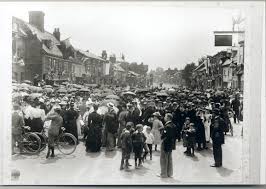 for the event, making her first annual transatlantic trip from the U.S. Taking her sons, she traveled throughout Europe each year and continued to produce stories and plays. Her eldest son, Lionel, died of consumption in Paris in 1890, throwing her into a deep depression. She dove into charitable activities to distract herself and eventually returned to America where she published her autobiography devoted to Lionel, The One I Knew Best of All. That same year she display a set of her books at the Chicago World's Fair.
The Burnetts' marriage was not a happy one, and the couple divorced in 1898. Frances continued to have success as an author with A Little Princess and The Secret Garden both finding critical and popular acclaim. During her career, she published more than forty novels and plays and dozens of short stories. In 1909, she built a home in Plandome, Long Island, New York where she lived until her death in 1924.
Have you ever read any of Frances Hodgeson Burnett's stories?
____________________

Linda Shenton Matchett writes about ordinary people who did extraordinary things in days gone by. She is a volunteer docent and archivist for the Wright Museum of WWII. A native of Baltimore, MD, Linda was born a stone's throw from Fort McHenry and has lived in historic places all her life. Now located in central New Hampshire, her favorite activities are visiting historic sites and immersing herself in the imaginary worlds created by other authors. Learn more about Linda and her books at http://www.LindaShentonMatchett.com.
Love at First Flight

Can two people emerge from the clouds of past hurt to find a silver lining of love?
Evelyn Reid would rather fly than do anything else, so when war engulfs the U.S., she joins the Women's Auxiliary Flying Squadron. One of the program's top pilots, she is tapped for pursuit plane training...the dream of a lifetime until she discovers the instructor is her ex-fiance, Jasper MacPherson.
Collecting enough points to rotate stateside, fighter pilot Jasper MacPherson is assigned to teach the WAFS how to fly the army way. Bad enough to be training women, but things take a turn for the worse when his former fiancee shows up as one of his students.
Purchase Link: https://amzn.to/3kxjBoY
Posted by Linda Matchett at 1:30 AM