In the 1800’s, large smooth stones or heavy glass were used to smooth fabric. Then blacksmith’s started making solid metal sad irons. “Sad” meant “solid”. Even in modest homes, there were two sad irons. One to use while the other heated on the stove. The rich had a stove with slots made for only heating sad irons. Metal handles had to be gripped with a heavy pad to avoid hand burn. The sad irons had to be lightly greased on a regular basis to avoid rust from forming on them. Beeswax was used to keep the iron from sticking to starched cloth.

Some sad irons were made with wooden handles which they would call “cool sad irons” where a pad to pick up the hot iron was not needed. Then there were goose irons, which were called this due to the curve of the handle on the iron.

In the later 1800’s, sad irons were made with a shallow base which would hold hot coals. The coals kept the iron hotter longer. Or the user could heat a small metal box heated by a fire and inserted into the base of the iron to keep it cleaner and hotter longer.

Women who used the irons to smooth clothes, sheets, and more had to practice using the sad iron at the appropriate heat so they would not scorch the fabric. Ironing was a hard task due to the long time it would take the iron to heat over a fire or stove. 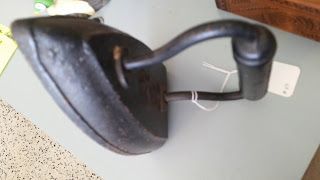 Women would spit on the bottom of the iron to test the heat. In the early 1800’s the fabrics used were cotton and flax linen. Some families washed feed sacks and made clothes from them. The sad irons were used to eliminate the wrinkles.

By 1895, Mrs. Potts sad irons were the most popular in the world. A set of three (each weighed almost sixteen pounds) came with a trivet (stand) and a detachable handle found in the Montgomery Ward catalog for around sixty-five cents. In 1920, the electric steam iron was invented, but it didn’t see widespread use until years after the Great Depression.

I am not a fan of ironing today with all our fancy irons! I use a water squirt bottle to take wrinkles out of the clothes I take out of the dryer and hang until dry. Do you iron? What kind of iron do you like to use?

Thank you for visiting me here today!

Posted by mollyjebber@yahoo.com at 3:00 AM